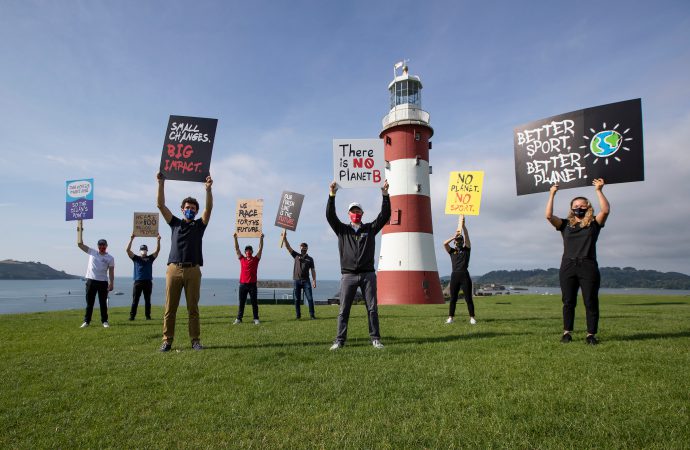 Positioning sustainability and purpose as part of the fun and competition enhances sport, and gives properties who are doing it right a source of competitive advantage

If you’re settling down to watch a television show on one of the UK’s main channels, the chances are that if you watch for long enough you’ll come across a storyline, segment or segue where sustainable behaviour is either overtly or more subliminally on show.

A growing percentage of the productions airing on channels belonging to the BBC, ITV, Channel 4 and Sky (268 according to its latest report) have been certified by albert, an organisation helping to decarbonise the British television industry through guides, training and carbon calculators.

And while reducing the carbon footprint of the nation’s largest broadcasters and independent production companies is a worthwhile endeavour in itself (albert reckons that there has been a 10% reduction in the industry’s carbon footprint over the two years pre-Covid) its work to normalise sustainable behaviour through on-screen behaviours and stories has the potential to be gamechanging.

If you’re a writer, producer or commissioning editor, albert provides tips on how to bring sustainability into your show naturally through character development and narrative, so that if you’re watching your favourite drama and one of the characters orders a vegan meal during a tense lunch or furiously drinks water through a reusable bottle after chasing a criminal on the run, it seamlessly fits into the story.

Sport, of course, has a similar if not greater cultural significance than television, and has the power to create a lasting impression on those engaging with it. But, like television (both activities that people look to for entertainment), if the approach to sustainability is clunky, depressing and poorly-researched, it can be a real turn-off.

Although sport’s unscripted and unpredictable nature may make it difficult to shoe-horn sustainability into the action, SailGP’s approach to integrate an ‘Impact League’ into the competition positions sustainability as an enhancer of the sport, not a detractor from it.

The premise is simple; a second leaderboard has been added to the competition and two champions will be crowned at the end of the SailGP second season in San Francisco next May. One team will win a trophy for the number of points it accumulates on the water across nine race weekends. Another team (or perhaps the same team) will emerge victorious from the Impact League, generating points for the positive impact they create during each weekend across 10 sustainability criteria.

Weaving sustainability into the “fabric of sport”, as described by SailGP, is potentially the most promising way to capture the imagination of sports fans who are generally ambivalent about environmental matters. Aligning environmental stewardship with core sporting metrics (i.e. winning competitions) should give them more reason to care.

In their 2019 Harvard Business Review article, ‘Yes, sustainability can be a strategy’, Ioannis Ioannou and George Serafeim, asked whether the increasingly common practice of sustainability stopped it from being a source of competitive advantage for organisations. The answer, they found, was ‘yes’ if it is approached in a generic way.

But a strategic approach can certainly be a source of competitive advantage. And in a hotly-contested industry such as sport, where the battle for interested fans and partners is pronounced, SailGP – a fledgling competition – has decided to make sustainability its competitive advantage by doing things its peers won’t do.

In its first season it secured a partnership with Tesla, while one of its key objectives is to stimulate sustainable development in the coastal towns and cities where races take place, mainly through blue carbon and renewable energy projects. From next season, each host city has to make a concrete, contractual commitment to sustainable development and carbon reduction.

“We want to redefine sailing,” Fiona Morgan, SailGP’s global director of purpose and impact, told The Sustainability Report in April. “And sustainability is a core part of that.”

Each of the eight SailGP teams has chosen an ‘Impact Partner’ for the Impact League. The partner logo will be embossed on their team’s F50 catamarans, and whoever comes top of the league will win funding for that partner.

The beauty of the Impact League is that it adds an extra layer of competition for athletes and fans and offers a meaningful outcome for the teams and partners.

A couple of weeks ago, I was lucky enough to host a talk with Canadian Olympian Seyi Smith who is attempting to integrate sustainable practice within grassroots sports events through gamification (making it a fun and enhancing element of the event). Smith suggested that to engage sports fans in sustainability, a project should have a couple of characteristics: for macro issues, the narrative should be shaped around collective action. For micro or local issues, there should be direct incentives, the opportunity for continuous improvement, and/or positive peer pressure.

The Impact League reinforces SailGP’s narrative and positions the property as a movement more than a sport. As well as presenting sustainability and purpose in the context of competition and entertainment, collective action by the teams and sailors has the potential to incentivise (and positively peer pressure) fans to adopt similar sustainability behaviours.

Imagine if other competitions followed SailGP’s lead and made sustainability a key part of the action? This concept could easily be adopted by other team sports, F1 for example. Up until a few years ago, football teams across Europe with the best disciplinary records were granted a passage through to UEFA’s Europa League competition. Could the same opportunity be provided through similar sustainability criteria?

Up until then, sustainability will continue to be a point of competitive advantage for SailGP in terms of engaging like-minded fans and sponsors. I’m really looking forward to seeing how the first Impact League pans out.