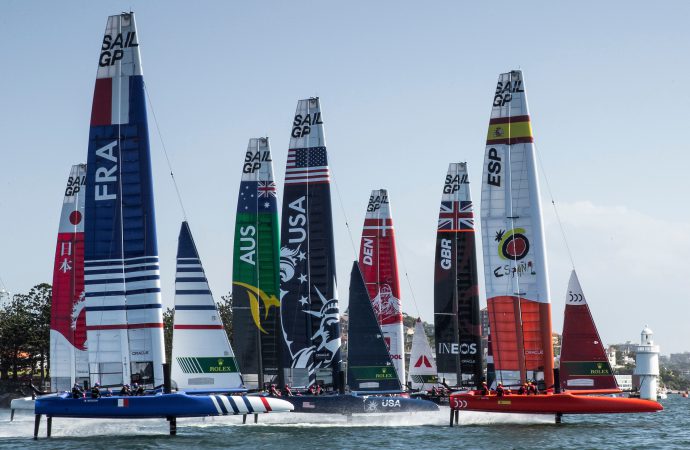 Fiona Morgan, global director of purpose and impact, explains how the competition is working with host locations to accelerate renewable energy and blue carbon projects ahead of its second series

SailGP has developed what it terms as an ‘Impact One-Pager’ for all of its host cities; a document that spells out exactly where the fledgling and high-octane sailing competition aligns with its chosen locations on sustainable development and positive impact.

It’s a guiding principle – a reference point – for a huge amount of work the entities will do collectively away from the excitement of the racing. And for SailGP, the sentiment found on that one-pager is just as – if not more – important.

As the second edition of the F50 catamaran series commences in Bermuda this weekend, the SailGP team will be hoping to build on a successful first edition in which its brand became synonymous with sustainable innovation and breath-taking sailing.

Fiona Morgan, the former head of group campaigns for Sky’s Bigger Picture Team (the team behind the Sky Ocean Rescue campaign), joined SailGP last autumn to drive the former as its global director of purpose and impact.

During its first series, SailGP set a robust framework, events have been ISO2012 certified and it’s the first ever climate positive sport. It’s revealed its ambition to be a “powered by nature” on-water and on-shore by 2025 with a 55% reduction in its carbon footprint.

But last October, it went a step further by revealing its Race for the Future environmental and social strategies that will define the sport. Its environmental targets go beyond the usual ad-hoc, tick-box requirements that many sport events revert to. SailGP will invest in clean energy. It will “collaborate and facilitate” advances in cleantech. And it will work with host cities to drive sustainable legacies.

That’s what the Impact One-Pager is all about. A potentially game-changing blueprint distilled over a few paragraphs.

“We pull together all the information about where we want to make an impact together and we’ll report on the results after the event. The host cities have been really receptive to it as it gives them a chance to tell their stories,” Morgan tells The Sustainability Report.

“Our job is to look at the big parts of our ecosystem that we can affect positively, and host cities are probably at the top of that list along with the marine industry in general. Once we partner with a host city, we find the right contacts, find out the projects they’re working on, and find out how we can have an impact together.”

In Bermuda, for example, SailGP is working with the Bermuda Department of Energy and Rocky Mountain Institute to engage the community around the subject of clean energy, and why generating renewables is important for island nations. Taranto is embarking on a significant regeneration programme, in which SailGP is hoping to play a part, particularly in the field of regenerating cities.

After the season opener, the subsequent two races will occur around the Italian city of Taranto, in the southeast, and Plymouth in the UK. Morgan explains that all three locations have sustainability projects happening around the race.

But Morgan and SailGP want to take that one step further; from season three all host cities must sign the competition’s Climate Action Charter and commit to two key impact projects, one of which must involve clean energy, and the other should focus on “blue carbon” – projects to maintain and restore “critical carbon-sequestering shoreline ecosystems”.

These commitments will be part of the tendering process and within host city contracts as SailGP aims to find up to 10 locations for next season.

Cities are responsible for almost three-quarters of the world’s energy-related carbon emissions, and this proportion is set to grow as urban populations continue to mushroom.

“Cities need to play a role,” Morgan says. “So what we’ve done is, in the bid documents, is create a section on sustainability where we’re very open and clear about what we stand for and what we want to do with them.

“We want to see that they’re committed, that they’ve thought about a strategy around climate change, that they have a carbon reduction strategy. It sets the tone for discussions moving forward.”

It’s not just host cities required to make a commitment and contribute to SailGP’s sustainability journey. The teams and athletes competing are expected to play a role beyond entertaining the crowd. Indeed, one of Morgan’s first tasks in the role was to find a way for the eight competing teams (Australia, Denmark, France, Great Britain, Japan, New Zealand, Spain, and the US) to discover their unique purpose and a goal they want to achieve in the field of sustainable development over the course of the season.

To achieve this, Morgan conducted workshops with each of the teams, interviewed their athletes and executives, undertook research in their territories to discover “the big environmental and societal issues”, and pieced that information together to help them articulate this target.

Team Spain, for example, has embraced sustainable tourism and is searching for solutions around less carbon-intensive travel.

Morgan also hinted that sustainable action on the part of the teams could contribute to their sporting success, with the concept of an ‘Impact Winner’ being mooted as well as an overall championship winner.

“We want to redefine sailing,” she says, “and sustainability is a core part of that.”

During the first edition of the competition, SailGP’s partnership with Tesla (now, the most valuable car company in the world) attracted attention, and the strategy is to find more ‘non-traditional’ sports partners to align with (and help drive) SailGP’s purpose agenda.

To facilitate this, Morgan has spent time “upskilling” the competition’s commercial team on purpose and sustainability through workshops, training sessions and quizzes.

“We started one workshop with a clip from RuPaul’s Drag Race which talked about climate change because you’ve got to make it fun and engaging,” she explains. “But you’ve also got to make it relevant, so we talk about the commercial return of climate action and being part of the clean energy revolution.”

Morgan has noticed a “shift” in the way sponsors negotiate partnerships with “sustainability directors and brand directors in the room now, not just sponsorship directors”.

“Brands want to work with sports that are more authentic, that have purpose, and are agile,” she adds, “and the best thing about our sport is partners can buy into our strategic vision, which is pretty rare in sport.”

But grand visions mean nothing if the basics aren’t being done, and Morgan, alongside SailGP’s sustainability strategic consultant Susie Tomson, continues to make progress on its “licence to operate”. The organisation is working with One Carbon World to offset its unavoidable emissions through renewable energy projects.

SailGP has also challenged its suppliers to reduce the competition’s carbon impact; the result of which has seen 10 transportation containers removed from its logistics compared with season one.

Like most (if not all sport), fan travel is a major source of scope three carbon emissions – and the most challenging to find a solution to. Every ticket sold for a SailGP event during the second season will include a $1.50 offset cost to make it a “climate-positive” ticket, and to educate fans on the 1.5°C boundary we need to avoid exceeding to halt the worst-case climate change scenario.

“We talk to fans about the importance of understanding their carbon footprint, and offering them tips for reduction,” says Morgan. “Fan travel is an ongoing issue for sport. And while this is not solving the problem, it’s about being more efficient and innovative.”