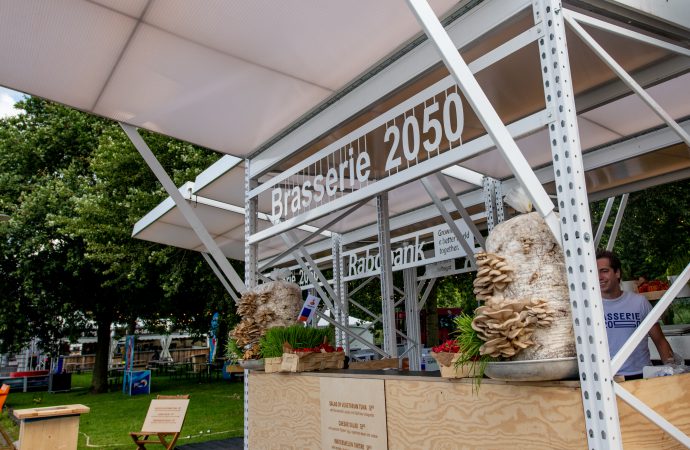 With the population estimated to rise to 10 billion by 2050, food production needs to increase while reducing its environmental impact. Brasserie 2050, a concept showcased during FEI’s Rotterdam event, offers a solution

By the year 2050, the world’s population is forecast to be as high as 10 billion people. In order to sustain the mushrooming population, food production has to increase by 60% – but its negative impact on the environment has to decrease by 50%.

As is stands, with a global population of just under eight billion, there are 795 million people who are undernourished or starving. Food production contributes around a quarter of the greenhouse gas emissions responsible for climate change. And of the food we do produce, one third – or 1.3 billion tonnes – is wasted.

It’s clear that to feed people sustainably we need to drastically change our approach to food and its production.

To address this, Rabobank – the Dutch bank and one of the global leaders in food and agriculture financing – developed its Brasserie 2050 concept, which showcases food that is sustainably sourced and healthy at major events to raise awareness and encourage behaviour change related to eating habits.

Dishes are generally made with less meat and ingredients sourced locally to drastically reduce the meal’s carbon footprint. Each dish served comes with a brief explanation of its sustainability credentials.

The FEI European Championships Jumping, Dressage and Para-dressage in Rotterdam in August was one such event that incorporated the Brasserie 2050 concept, allowing Rabobank to invite its customers to the CHIO (the event venue and Rabobank partner) to sample the food. Brasserie 2050 was also open to ticket holders during selected time slots, with around 100 people per day sampling the dishes.

“When we promote Brasserie 2050 at an event, we start by looking at the location and finding out what type of food production is available there,” Remon Blok, Rabobank’s director of food and agriculture, tells The Sustainability Report.

“During the event we had a tuna salad that was not made with tuna, but with soy. But the soy was not imported – it was grown about 30 miles away in the region around Rotterdam. Basically, Brasserie 2050 is not promoting a specific diet, but it’s more about supply chains.”

Fred Rozendaal, managing director of the FEI European Championships in Rotterdam, adds that the concept received “very positive feedback” and hinted that it will be incorporated again at future FEI events hosted in the city.

Last year, the FEI published its own sustainable event guide so that organisers of affiliated events could minimise their negative environmental impacts. Food and beverage provision was one such area that was highlighted.

One of the key recommendations is to “engage with local breweries, grocery and raw material suppliers” in order to reduce freight transportation, and to purchase seasonal, local and organic food – policies that chime with the overall objectives of Brasserie 2050.

The international federation also wants to see event organisers tackle waste by providing suppliers with estimated spectator numbers and to encourage the provision of at least one vegetarian meal, as well as avoiding red meat (which has a big environmental impact).

“What we cannot do is produce food and transport it all around the world,” explains Blok. That’s too much of a footprint.

“We have to change. We also need to produce healthy food to stop people from getting diseases like diabetes, which reduces the cost to the healthcare system. We have to make sure farmers who are producing our food get a fair price and have a sustainable income. We have to produce more food, but make sure it’s available to everyone. In parts of the world there are people eating too much food and becoming obese, and in other parts of the world they don’t have any food.”

Blok adds: “When this kind or urgency emerges, everybody wonders what they could do to change and make the world a little bit better. Brasserie 2050 is a concept that shows you that you can eat nice food, healthy food with short supply chains. It provides a useful answer.”