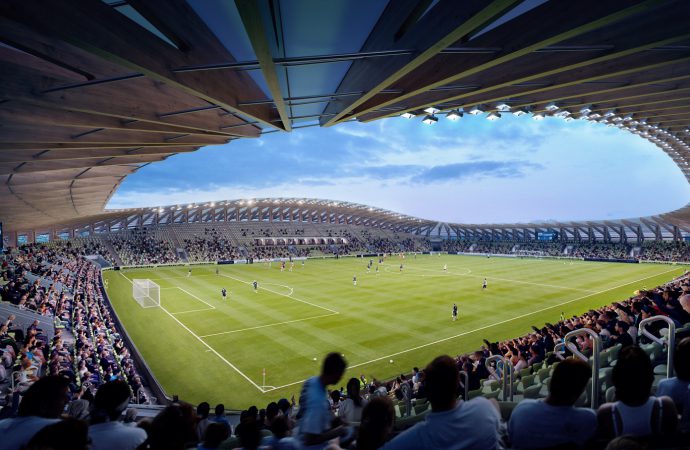 Planning permission for an all-wooden stadium for League Two football club Forest Green Rovers, and a wider £100m Eco Park development, has been rejected by the local council.

Stroud District Council, in the southwest of England, voted against the landmark project due to concerns around lack of community benefit and noise.

Following the planning meeting, Councillor Haydn Jones said that while the plan was “stunning” he thought it had “greater costs than benefits” to the local community and road network.

However, the chairman of Forest Green Rovers, Dale Vince – the renewable energy entrepreneur and founder of Ecotricity – said the decision was a “farce” and the reasons provided for the rejection were “tenuous at best.”

During an interview with the BBC, Vince told the public service broadcaster that he was unsure about whether the club would appeal the decision.

Plans for the Eco Park project and Zaha Hadid-designed stadium were first revealed in 2016.

If given the green light, the stadium would have been the first owned by a professional football club to be totally made out of wood. When Zaha Hadid won the seven month-long design competition in November 2016, Vince said that wood was chosen for being a naturally occurring material and for its low carbon content.

The 5,000-capacity stadium was to be completely powered by renewable energy and was cited by Vince on numerous occasions as being the springboard for the club’s on-field success. Currently in the fourth tier of the English Football League, Vince’s ambition is to see the club reach the Championship – one rung below the Premier League.

The venue was set to be the centrepiece of the 100-acre Eco Park – a sports and green technology hub owned by the Gloucestershire-based Ecotricity. It was proposed to include grass and all-weather training facilities, a sports science hub, and was expected to accommodate 4,000 jobs.

Developing a stadium of this type would have helped to cement Forest Green’s status as the “greenest football club in the world” – a title bestowed by FIFA last year. The club is certified carbon neutral, and was the first professional football team to adopt the UNFCCC’s Sport for Climate Action Framework.