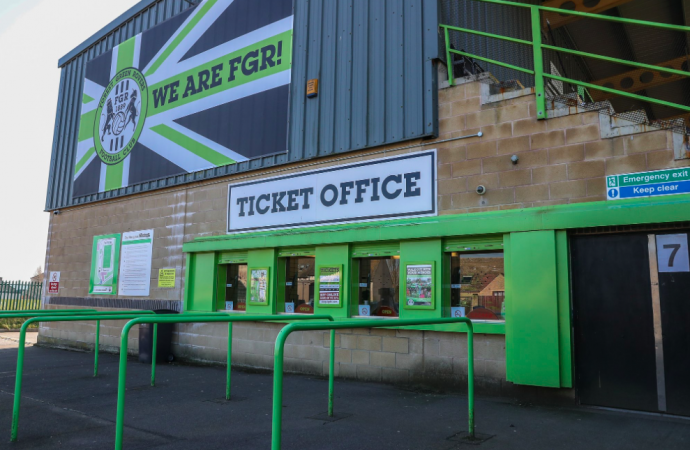 Journalists from as far as the US and Japan came to witness the fourth-tier football club become the first UN-certified climate neutral sports team. Miguel Naranjo, of the UNFCCC, hopes others will follow in its footsteps

Every now and again, an ambitious upstart with an unrivalled drive and fierce will to win will upset the natural order in professional football. Europe could scarcely believe it when Greece beat Portugal in its own back yard to win the 2004 European Championships in Lisbon. Earlier that year, FC Porto (under the guidance of a youthful Jose Mourinho) outwitted Europe’s rich elite to win the Champions League.

And few English football fans will easily forget the rampaging Leicester City team that won the Premier League title in 2016, renewing hope in a competition that had always appeared out of reach for all but a few exceptional teams.

But the natural order is that way for a reason. Real Madrid, Barcelona, Manchester United, Bayern Munich and Juventus will, more often than not, come out on top.

While dislodging the traditional giants of the game is unrealistic for the majority of football clubs, having a sparse trophy cabinet doesn’t necessarily mean that a team can’t have a significant impact beyond its immediate geographic location.

It’s easy to see why. Since the club was acquired by the renewable energy entrepreneur Dale Vince a decade ago, very few football teams of its modest stature have had anywhere near the press coverage it has enjoyed because of its pro-planet stance.

All-vegan menus. An organic pitch. A current stadium powered by renewable energy and plans to build a new, all-timber stadium designed by the studio of legendary architect Zaha Hadid. Forest Green Rovers has the quirky yet uncompromising characteristics to achieve cult status, especially in the eyes of those who care deeply about environmental stewardship as well as the beautiful game.

That eco-friendly philosophy and increased media coverage caught the attention of the United Nations – specifically its UNFCCC division that wages a war on climate change and all its causes. For that reason Forest Green Rovers, says Miguel Naranjo, UNFCCC programme officer, was identified very quickly as the natural poster boy for climate action and environmental awareness in sport.

And so it came to pass. Last week (30th July, 2018), in the presence of journalists who had travelled from as far as the US and Japan, Forest Green Rovers was unveiled as the world’s first UN-certified climate neutral football club. League Two is the lowest tier of professional football in England, and no press conference at that level has received that amount of global interest apart from, perhaps, when former England and Lazio coach Sven Göran Eriksson was appointed as Notts County’s director of football in 2009.

CNN, The Times, The Guardian all carried the news. And rightly so. Forest Green Rovers’ achievement is an extraordinary one that took vision and endeavor. The club now stands alongside giant corporations, like Microsoft, Sony and BNP Paribas, who have all taken the UN’s Climate Neutral Now pledge.

More importantly, the UNFCCC is banking on bigger names in sport, with greater resources, to walk in the footprints of the small provincial club from Gloucestershire.

“Engaging with sport gives us the capacity and opportunity to raise awareness among the general population and across value chains in the sector, all the providers and clients. It’s enormous,” Naranjo tells The Sustainability Report.

“If you consider the emissions generated by the cement or steel or chemical industries, their footprint is much bigger than any soccer club. But sport is a critical sector for us because it gives us an unbelievable opportunity to communicate a positive message to the masses. Plus, big sporting events like the Olympics and a whole Premier League season will still have significant total emissions.”

Although Forest Green Rovers is the only standalone football club to be part of the UNFCCC’s Climate Neutral Now project, FIFA has also been involved since 2016. The world football governing body has been offsetting emissions related to travel and hosting tournaments at various points since the 2006 World Cup in Germany, but now has a firm commitment to become greenhouse gas emissions-neutral by 2050.

During the 2014 World Cup in Brazil alone, FIFA financially supported several deforestation prevention projects in the Amazonian nation to account for the 331,000 tonnes of carbon emissions generated by the tournament.

And as a result of offsetting 243,000 tonnes of emissions generated by FIFA and the local organising committee during the 2018 World Cup in Russia, sustainable development projects in India, Thailand, Brazil, Chile, Kenya, Pakistan and the host nation benefitted. See all projects here.

The International Olympic Committee and National Hockey League in North America are among the other major sporting organisations in talks with UNFCCC about commiting to the project, says Naranjo, adding that an overarching Sport for Climate Action framework is likely to be unveiled at the COP24 climate change summit in Poland in December.

Forest Green Rovers owner Vince was among the group of sustainability-conscious sports executives to piece together the framework last November at the UN headquarters in Bonn, Germany, and Naranjo hints that both the UNFCCC and the football club will work on additional sustainability activities to heighten interest ahead of December’s gathering.

However, getting other football clubs to make similar climate neutral pledges may be a hard sell for the UN.

While Forest Green Rovers has won fans across the globe (the team has a supporters club in Norway), rival fans closer to home aren’t so generous with their admiration. In fact, a fan poll carried out last month before the start of the season found that Forest Green Rovers is the 23rd most-liked team in League Two. There are 24 teams.

It could that fans of opposing teams resent the attention Forest Green Rovers receives because of its unique philosophy and outspokenness of Vince when it comes to issues like climate change, renewable energy, food and health.

It should be noted that while the majority of Forest Green Rovers fans are enjoying the limelight and success Vince’s presence brings, a small but vocal minority of supporters have been known to voice their displeasure at the all-vegan menu and jibes from rival fans about the club’s green credentials who claim it’s all for PR purposes.

Hopefully, for the ambitions of UNFCCC and the planet in general, these factors won’t stop other sports clubs addressing their carbon footprint or increasing their sustainability operations. Forest Green Rovers’ climate neutral achievement should not be misconstrued as a publicity stunt, but as a signal of good governance and community stewardship.

It also demonstrates what can be achieved at a small club with limited resources – a message that should be heightened as the majority of the club’s English Football League (EFL) counterparts struggle to address sustainability issues.

Earlier this year, the UK’s Environmental Audit Committee wrote to the chairman of the EFL, Ian Lenagan, to urge him to encourage the league’s 72 member clubs to phase out single-use plastics via deposit return schemes and fan engagement. The Sustainability Report understands that the EFL is currently seeking advice to see how it can implement some of these recommendations.

Time will tell if Forest Green Rovers’ influence and the Sport for Climate Action Framework will convince football clubs – and sports organisations in general – to mitigate their own footprints and put sustainability closer to the heart of their operations. But they’ll have no excuse not to.

TSR: How does climate neutral differ from carbon neutral?

MN: We use the term climate neutral instead of carbon neutral because climate change is caused by more than just carbon emissions. We found out about Forest Green Rovers because we were looking for organisations in the sport sector that were already active in sustainability, and in particular climate issues.

TSR: How easy/challenging is it to become climate neutral?

MN: I would say that the process is quite straightforward once you decide it is important to you. The first step is to know how much you emit, and from where. You have to do inventory of your greenhouse gas emissions. There are many experts around and you don’t have to do it on your own.

The next step is to make a decision on where you can reduce those emissions. In some cases, there is a cost involved in upgrading your building – changing light bulbs, changing car fleets etc – and its up to the organisation, depending on its resources, what can be done immediately in terms of reduction.

Once you know what you cannot reduce, it’s just a matter of taking the decision and saying ‘we’re going to compensate’ via offsetting projects via accredited carbon credits organisations.