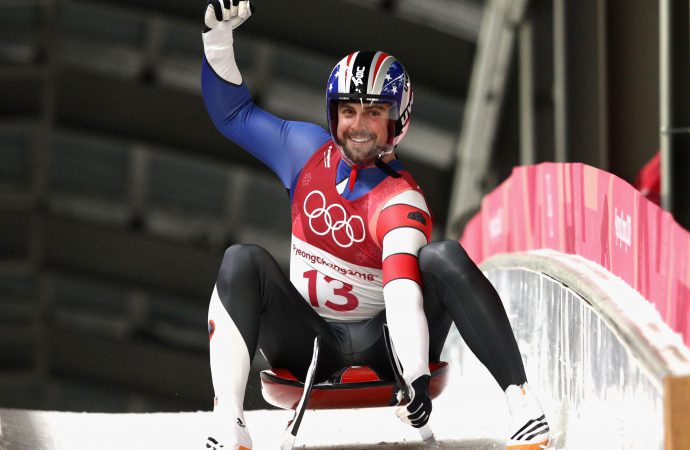 With more than 2,500 medals won across Summer and Winter Olympics, the United States of America can legitimately refer to itself as the most successful nation in the history of the Games (although that status could be argued by the Soviet Union, which has the best medals to Games ratio).

The icons – Michael Phelps, Shannon Miller, Jesse Owens – will long be remembered for their unrelenting pursuit of success and consistent capture of medals. Others etched their names into history by being the first: when Chris Mazdzer collected his silver medal and stood on the podium during last year’ Winter Olympics in Pyeongchang, he became the first American in history to win an Olympic medal in the sport of luge.

With that win, Mazdzer catapulted himself into the public’s consciousness, becoming a household name and being invited to feature on prime time entertainment show, Dancing with the Stars.

And in a nation obsessed with sport, Mazdzer is hoping to use his growing profile to increase the public’s awareness about a topic that is hugely important to him and his sport – but a divisive subject in the US: climate change.

“It’s frustrating that it is such a polarising topic in the US, but at the end of the day, we all have a responsibility as human beings and I’m in a position now where I do have a voice and people will listen,” he tells The Sustainability Report.

“But I think we’re seeing a change in the way people think – they’re more accepting of the idea. Unfortunately it took some really big hurricanes and droughts – big natural disasters – to put climate change in people’s minds.”

Mazdzer’s platform will take on extra significance after being named as the International Olympic Committee’s first sustainability ambassador as part of the organisation’s new athlete ambassador project. Still in the pilot stage, sustainability is the first topic being addressed by the programme, which has been designed to bring globally significant issues like climate change and ocean plastics to wider audience, and to give athletes a voice in something that they’re passionate about.

And after growing up just a stone’s throw from Lake Placid, Mazdzer is very aware of the changing climate, and is passionate about keeping a lid on it.

“I’ve been competing outside for the last 23 years and I grew up in northern New York, where it was literally winter for six or seven months of the year. We would get snow anywhere from October until April,” he explains. “However, there’s been a decline in the length of winter, especially around Lake Placid, which is having milder winters, bigger storms and more rainfall.”

The change in weather patterns is obviously bad news for the owners and operators of ski resorts and other winter sports facilities in the area. It’s also hugely inconvenient for the sports and athletes, particularly in luge where consistency levels the playing field.

“You’re all using the same track from the first athlete to the last athlete, so if we have really cold temperatures it’s really consistent for every single athlete. But the second it gets a bit warmer athletes won’t have the same track,” he adds. “It becomes a big issue trying to figure out how we can make the competition as fair as possible.”

The issue hasn’t gone unnoticed in the wider luge community. At this year’s Luge World Championships, Mazdzer was part of a group of 10 luge athletes who created a video aimed at spectators and urging them to take climate action by signing the Citizen’s Climate Pledge.

“What drew me to Michael’s framework was the fact that he was trying to connect athletes to fans,” says Mazdzer. “Most people have a hard time believing scientists and politicians, but for some reason the really connect with athletes, and if athletes have a message fans will listen to it.”

It was Mazdzer’s central role in this project that first alerted the IOC to his suitable as an ambassador, he says. As well as searching for athletes with the passion and profile to speak about topics like sustainability in an authentic and impactful way, the ambassador programme also serves as a way to help athletes successfully transition out of sport by giving them more skills.

Described as a “tailored approach”, the athlete ambassador programme will provide training to athletes so that they can develop a new career while still competing in elite sport.

As the current chair of the Athletes’ Commission for the International Luge Federation, Mazdzer is taking his first steps in sports administration, and has put himself in a position in which he can influence the sport he fell in love with and help it become a more sustainable organisation.

He has just been re-elected for another four years, beyond the 2022 Beijing Winter Olympics – after which he will retire from competitive sport.

“It’s a legacy thing,” he says. “A huge part of this is about creating a better sporting environment than when I first got involved. Sustainability during competitions is something I am looking at currently. How can we make our competitions more sustainable from an International Federation and organisational standpoint?”

And now, with the IOC’s backing, Mazdzer feels he can make some real progress for luge and sport in general.