“Going into the unknown”: Where next for athlete climate activism? 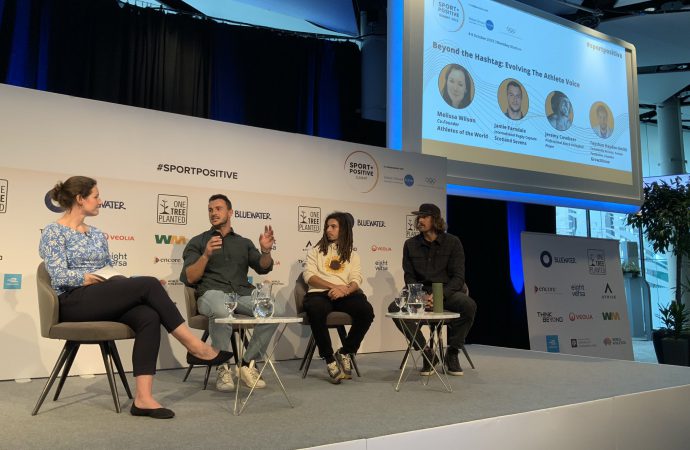 Sport revolves around athletes, not least as primary vessels for communicating about issues like climate change. Athletes hold a majority share of global cultural influence at over 50%. Moreover, a survey conducted by World Athletics found that 70% of athletes are concerned about climate change, making the move from care to action upon this tremendous platform one of the key issues in the sector.

A message will be much more impactful in the form of an athlete social media post, who’s picked a meaningful initiative to support via purpose-driven engagement, compared to a press release from the team they play for.

This was the analogy provided by professional beach volleyball player, Jeremy Casebeer, during the ‘Beyond the Hashtag: Evolving The Athlete Voice’ panel at Sport Positive Summit 2022. Casebeer was joined on stage by Jamie Farndale, Scotland Rugby Sevens captain, Tayshan Hayden-Smith, community activist and former footballer, and Melissa Wilson, ex-GB rower, who moderated the session.

All the panellists are active in the sustainability space. Wilson co-founded Athletes of the World to harness the collective voice of athletes and remove barriers to athlete engagement. Since 2020, she’s brought over 500 elite athletes together across various campaigns, including a letter to the UK government with 320 GB Olympian and Paralympian signatories

Inspired by Wilson, Farndale co-wrote an open letter signed by hundreds of professional players urging World Rugby to take a leading role in sustainability. He has since become involved in the governing body’s 2030 Environmental Sustainability Plan, and recently begun a Masters in Sustainability Leadership at Cambridge University.

Hayden-Smith grew interested in horticulture and its connection to community, especially after the Grenfell tower fire, where he was “forced to know my neighbour and my space.” This led to founding Grow2Know, an NGO empowering and inspiring young people through gardening.

Casebeer grew up spending time outdoors in Southern California, studying environmental sciences before the opportunity to pursue professional beach volleyball, which he’s done for 12 years. He is involved in many projects, including as project manager for the AVP Tour and Waste Management (WM) Climate Action Plan.

One of the key issues explored by the panellists was overcoming fear to participate in the space.

“Sure, some athletes have lavish lifestyles,” Casebeer said, “but if you look at the lifestyles and footprint of business and business travel, athletes are tiny compared to that, but we’re more visible.

“I was so worried about not being an expert. It really wasn’t until a few years ago I started being more vocal about it on social media, which is, for better or worse, an athlete’s main voice, and then trying to find different ways to just get over that initial fear. ‘I’m not perfect, but here’s everything I’m trying to do. Do you have any suggestions?’ And there’s definitely comments and DMs of people calling me out for travelling and flying. And yes, I do. But that’s part of my job. That’s how I pay the bills. But I’ve been measuring my carbon footprint, I’m working with non-profits and all these different projects, ‘Is there anything you would suggest anything I’m missing?’ And usually, you don’t get a response. So just be open and honest about what you’re doing and what you’re trying to achieve, and where you’re starting and where you’re trying to go.”

“I feel like there’s a stigma and a bit of an embarrassed approach to having a conversation about the environment,” Hayden-Smith added. “Especially around young younger athletes, because there’s so many pressures on them already. A lot of people in my community are just trying to survive.”

Wilson added that, in elite sport, athletes also find themselves “quite far from the community” that they originally came from and that one of the most “authentic” ways to engage on climate is through challenges keenly felt where they grew up or spent the most time.

“No one’s going to put you down for having a purpose and seeing the things that you believe in,” added Farndale. One of the reasons the Scotland Sevens captain became disillusioned with how he was being engaged on sustainability issues were ‘tick-box activities’, based upon which player was free on a particular day, for example, rather than sincerity.

Farndale also touched upon his hesitancy to engage with sponsors that look like they’re using athletes as mitigation to speak about an issue before continuing business as usual, while Casebeer reiterated that sponsors aligned with his values simply don’t have the financial clout of companies more inclined to greenwashing, such as those reliant on greenhouse gasses.

SailGP’s Impact League, where athletes compete on sustainable behaviours in addition to what happens on the water, was posed to the panellists as an example of incentivising green behaviours amongst athletes that could be replicated.

While Casebeer was keen to see concepts like the Impact League developed on a larger scale through different sports and leagues, even stating that this could be the “missing piece of the puzzle”, Farndale and Hayden-Smith stressed there was more than one way to involve athletes, who have different personalities, strengths and interests.

“We’re going into the unknown here,” said Hayden-Smith. “There needs to be a model, and we need to pilot new things and think outside the box on how we can do things.”

Rather than trying to make athletes care about environmental sustainability, Wilson asked whether sporting stakeholders should invest in individual climate champions and ambassador programmes for people who already care.

“Ambassadors are the way to do that,” Farndale responded, “because when you get the people that are so motivated to stick their head above the parapet, then more will come. And I think it’s about creating spaces. As an organisation, can you sit down your athletes for 30 minutes or an hour at lunchtime and say this is the climate crisis, this is why it’s an issue, this is why you should speak about it?”

Wilson believes such sessions could reinforce the point that athletes don’t need to be climate experts to participate, and that information should be distributed over time so that athletes can connect with issues more authentically, rather than during rigorous training schedules or while focusing on upcoming fixtures.

“Some of them [sporting organisations] have really great education programmes around gambling, mental health, diversity and inclusion,” she added. “I think that there’s still a gap to be crossed where most athletes feel like sustainability is something that has relevance to them.”

An obstacle that remains significant is that, compared to social injustices, both in society and sport, climate issues aren’t present enough to spark large-scale action.

Casebeer urged caution that a 30-minute session isn’t going to make an athlete who has never studied climate change feel comfortable about talking out about it.

“As an athlete myself, it took me 10-15 years to figure out my voice. So finding resources and pointing athletes in the right direction, I think is really important, but also realising there’s different levels of commitment and different ways to engage athletes,” he said.

Team Scotland supported some of its Birmingham 2022 Commonwealth Games athletes to speak about environment and sustainability, and Farndale was selected as one of the team’s ‘sustainability captains’.

“Using our old model of how we use athletes,” Farndale explained, “what they would have done is put out a nice press release about the environment, and then pick the player out of a hat, got a picture of them planting a tree and that would have been that.”

But after finding out Farndale was passionate about the topic, he was enabled to talk about what he wanted for a few media activations, making the transition from care to action more genuine than ever.

“It just felt much more authentic, but Team Scotland had to go out there and say, ‘Right, which of our athletes or our activities area?’ which is a difficult thing to go about. But the effort you put in there, I think you make back massively.”

“It’s not just about educating the athletes with the nuts and bolts of climate and their role in this, which I think is absolutely crucial,” Wilson said. “But how do you then allow that to be translated into them communicating effectively about this through the media activations that you’re talking about?”

Ultimately, effective athlete communication needs to prompt action in others. “A lot of this engagement, it’s just talk, it’s just ideas,” Hayden-Smith warned. “We actually need to see the change. We need to create and showcase and exhibit how we can change things internally within our communities and then go, ‘Why aren’t we doing this elsewhere?’”

As the panel concluded, Wilson encouraged the panellists for one line of wisdom that stakeholders should use when engaging with athletes.

“Don’t treat athletes as an afterthought,” was the simple message from Farndale. Rather than trying to impose ideologies, Hayden-Smith encouraged conversations with athletes because “they might already be interested in a certain concept or idea.”

With several stakeholders at the summit, Casebeer reminded everyone that “athletes are at the centre of every stakeholder in sport”.

“We have a direct and trusted relationship with fans, other athletes, leagues, teams, venues, sponsors. The right athlete who’s passionate and in alliance with the cause is a perfect messenger and way to amplify that message and bring more people in.”