This week in sustainable sport (26 May) 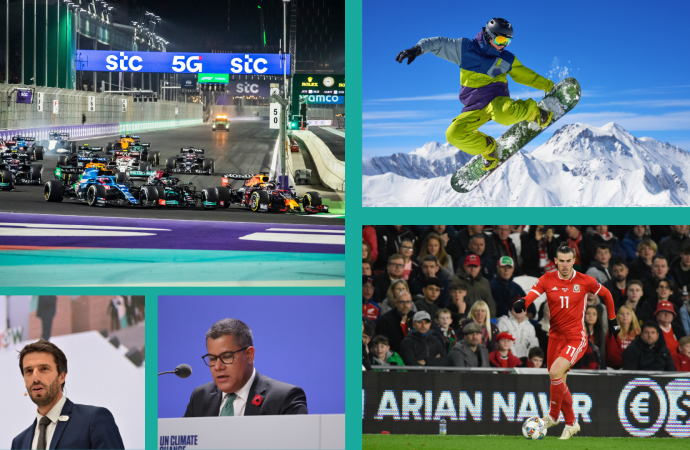 In this week’s sustainability and sport news roundup, F1 looks to group races by region, Envision Racing teams up with the COP26 president to push zero emissions vehicles and Paris 2024 unveils its sustainable ‘Food Vision’.

Back in 2019, when F1 published a wide-ranging sustainability strategy, a few eyebrows were raised. Could F1 reposition itself as a sustainable sport? The fact is that the cars going around the track only account for 0.7% of the organisation’s carbon emissions and, like many sports, much of the negative impact comes from business travel and logistics (72.7% in the case of F1).

As first reported in Autosport, F1 plans to make good on its strategic promise of making its logistical operations more efficient by grouping races together geographically by 2023 to avoid criss-crossing around the world several times per year. Chief executive Stefano Domenicali refrained from offering more details, but knows such a policy is crucial for F1 to achieve its aim of becoming net zero by 2030.

…and will have its most sustainable teams recognised

Grace Influential, an initiative set up by the Princess Grace Foundation, will award F1 teams who display leadership in both the fields of environmental and social sustainability. Teams have until March 2023 to make their case and will be judged through a set of evaluation and general positive impact metrics.

The former includes planning, innovation, shared value, engagement and alignment with the F1 sustainability strategy, while general positive impact metrics include alignment with the UN SDGs and the UNFCCC Sports for Climate Action Framework, philanthropic spirit, quality of submission assets and impact beyond the motorsport community. Winners will be announced in May 2023.

During the Formula E team’s Race Against Climate Change Live event (24 May), Alok Sharma, the COP26 president, called on leaders around the world to sign the Zero Emissions Vehicles Declaration (ZEV). The ZEV is a pledge to ensure that all new car and van sales will produce zero emissions by 2040 globally, with Greece, Vancouver and La Plata in Argentina already signed up.

Sylvain Filippi, the managing director and chief technology officer at Envision Racing, reinforced that zero emissions vehicles are “a vital part of the solution in the fight against climate change”.

“Through Formula E racing, we are showcasing the true potential of the very best electric vehicle technology that will make its way to the electric cars we will drive on the roads in the near future.”

Protect Our Winters grows its reach

The 2021 Annual Report from Protect Our Winters is out with several nuggets of positive information and key insights. The worldwide network of pro athletes, outdoor enthusiasts, scientists and winter sport resort owners – all united by their passion to save winter in the face of climate change – grew its reach by 25% from 2020 (16.7 million).

Its ‘Motivating Lifestyle Driven Advocacy’ report also demonstrated that “the majority of Americans…are on high alert regarding climate impacts on the places they escape”, with 75% searching for guidance on how to advocate and 73% eager to push policymakers to act on climate.

Paris 2024 aims to be a carbon neutral Games, with less than half the impact of previous Summer Games in London and Rio. And with 13 million meals being served across the Olympic and Paralympic Games, how food is prepared and disposed of will play a role in hitting that target.

– There will be twice as many plant-based foods per meal

– Zero food waste will be the objective, with a focus on sizing quantities and recipe design to reduce risk of non-consumed food

– 80% of food supplied from France, 25% coming from within 250 kilometres of competition sites

– Half the amount of single-use plastic in catering

Every year the Urdd Gobaith Cymru (Welsh League of Youth) produces a peace and goodwill message. This year the focus is on the environment, calling on politicians to take urgent action with the message: “It’s time to wake up.”

To keep on top of the latest news at the intersection of sport and sustainability, opt in to our weekly newsletter