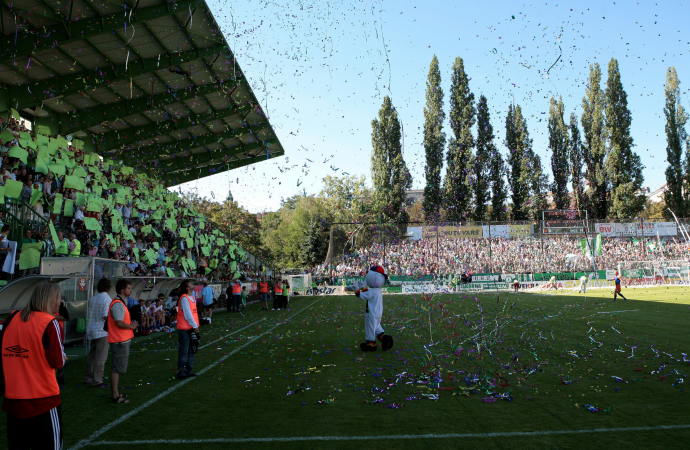 Football and the environment have always been a part of my life. But until recently they were separate. I watched football and became involved in it, and I began to be active and work in the environmental field from my early days at university.

Football has been a love story from the beginning. As a child, I started going to my local football club, Hapoel Kfar Saba, where my father had been a youth team player. For many years I followed the good and bad times, and thoroughly enjoyed being a part of its community. But I never really asked any philosophical questions about the game until I started my degree in my early twenties.

I decided to focus my studies on geography and urban planning. I had dreams of influencing Israel’s long-term planning, so it could be more environmentally sustainable. Above all else, I wanted better air quality so my asthma would not limit the places I could live. Chasing this dream, I became an environmental student activist in a local group. Later, I became this organisation’s national chief executive.

Over this period, my football club kept finishing in the middle of the Israeli Premier League. In the 2005/6 season, the club almost got relegated but was saved by an aggregate goal, despite not winning the crucial game. After celebrating the achievement I asked myself: what is my role in football as a supporter? Only to support the players and the team, and on worse days maybe scrutinise the club manager? Or is it more?

I got inspired by one of the theories I learned in university – Sherry Arnstein’s ‘Ladder of Citizen Participation’. I started researching “public participation and football”, and that magic moment happened. I discovered Supporters Direct. An organisation whose mission statement was to assist every supporter that wants to get involved in their club.

From this point, I became involved in European football. In Israel, we established Israfans, the umbrella organisation for members-run clubs and later I became a board member of Supporters Direct Europe. Football kept being part of my life’s passion while my day job was mostly environmental.

In 2008, we established the “Green Movement”, the Israeli Green Party, in which I was a founding member and chief executive. We didn’t succeed in the elections, but I continued for some years after to be involved in various environmental NGOs, green politics, and more.

A few months before Covid struck, myself and two colleagues established “Inclusion” – a public policy expert group that focuses on equality and social policy. We worked on various public policy projects, some of them environmental-related, and others about community resilience.

When the Covid crisis started, like many others, I was shocked and confused. After a few weeks, I thought that the situation is similar to what might happen with climate change and I suggested a project to Supporters Direct Europe.

The project was based on four strategies that the clubs had during the first months of the pandemic, and were mostly symbolic: some had messages like “stay at home”, others tried to entertain their fans with one-time activities, some produced public relations with random actions to help the community. Only a few promoted a relevant agenda with much more strategy-based action.

I assumed that football clubs would act the same regarding climate change. But we still needed more info, about different strategies of mitigation and adaptation.

As part of the research, I consulted with a colleague from my days as an environmental activist who now works for the Ministry of Environmental Protection. She suggested that we apply Israel’s Green Kindergarten sustainability initiative (which focuses on environmental education and immersing subjects in the natural environment) to football.

The result was a six-pillar model for a football club that wants to become climate-friendly, in a simple, understandable way. We had exciting initial interviews and talked with other stakeholders in Brussels and at UEFA. It was clear we needed to develop it more. We needed to expand our research, and build a more holistic strategy.  We understood that this is an optimal beginning for change. New funds and resources will be allocated, new partnerships will arrive, regulations will change, and more. The best approach to facilitate this was to write a policy paper.

In 2020, Supporters Direct Europe’s members decided to make environmental sustainability one of the organisation’s priorities, with specific reference to the climate crisis. It was a good base to start with; I interviewed, met and listened to many stakeholders. The core was based on the national supporters’ organisations, but also other European and worldwide initiatives.

We wanted to gather as much relevant info as possible, develop tailor made tools, and find a way for easy implementation.  My personal experience in both the football and the environmental world produced some interesting insights about climate change and the current and future situation in sport.

Sports fans know clubs and players from all over the world. The football industry is 24/7. Everyone knows everyone, knowledge and info spreads everywhere. The same goes for environmental activists. They know other countries’ policies, climate regulation, campaigns, and they exchange knowledge.

But somehow, when it comes to the combination of sports and climate change, information is not flowing in the same way. Amazing initiatives within Europe are not disseminated effectively. Language barriers could provide an explanation to a lack of joined-up thinking.

The information flow has another point of view. Lots of the data that the sports industry is based on, especially those on climate actions, comes from very specific geographical areas. Mostly from the northern hemisphere. We need to better connect the dots between climate data from other places to influence sports.

Another insight that is not only for supporters or community clubs, but all of sport is that lots of the solutions and the projects that are being offered are technical, and replicated from other industries. They are important, but they avoid the inevitable behavioural changes that must happen in order to tackle climate change – the adaptive challenges.

Technical solutions, such as changing the concepts of away fans, will not work and there is likely to be a backlash as seen in reaction to the European Super League. Fan attendance is a fundamental part of the game. Therefore, the adaptive challenge needs to be addressed. The whole concept of adaptive challenges relate to climate change and sport must develop.

Overall, a deeper dialogue with more partners is needed. No single stakeholder can act alone to create a lasting impact. Stakeholders need to be cooperative to leverage each other’s strengths.

Shay Golub is an entrepreneur and an expert in sport, community and environment