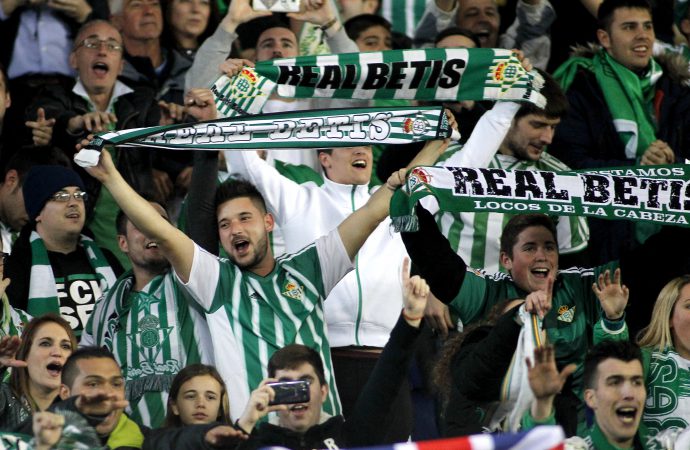 Over the last few weeks, it could be argued that coverage on The Sustainability Report has been a little ‘football heavy’. In September, we published our first white paper, ‘The football executive’s guide to sustainability strategy’, and followed it up with articles focused on Forest Green Rovers, the changing attitudes of European football fans relating to the environment, and Arsenal’s landmark recyclable cups partnership with Ball (as part of a larger deal with Kroenke Sports & Entertainment).

There seems to be a little bit of momentum happening in the world’s most popular sport around climate action. And this is only a good thing for obvious reasons.

It’s often suggested that sport can synthesise complex topics in a digestible manner for large proportions of the population, and if the message is crafted correctly football, because of its popularity, has a wonderful opportunity to bring climate action to the masses.

Of course, there have to be leaders. Real Betis, the La Liga football team based in Seville, has positioned itself as one of the undoubted trailblazers, particularly over the last week in which is has signed The Climate Pledge – a joint venture between e-commerce giant Amazon and Global Optimism, encouraging businesses to achieve the goals of the Paris Agreement 10 years early (2040) – and developed its own platform, Forever Green, an open-source website designed for companies to share environmental best practice.

From a personal point of view, I’m delighted to see Betis setting an example. Growing up, I was enchanted by the team’s distinctive green and white striped kits, and the sight of Denilson, the Brazilian dribble-master, and Nigerian international Finidi rampaging down the wings.

And, without wanting to sound too cliché, it’s great to see the emerald green of the team’s shirt increasingly reflected in its business operations: alongside Forest Green Rovers, Real Betis is one of only two football clubs to have adopted the UNFCCC’s Climate Neutral Now programme, and celebrated the achievement by launching a commemorative shirt manufactured out of recycled plastic.

“We want to be the most sustainable football club on the planet,” said club president Ángel Haro during the unveiling of Forever Green at the La Liga headquarters in Madrid last week. “This is not about being fashionable and positioning our brand. This is our strategic vision.”

Haro has been a champion of renewable energy and sustainable innovation in his professional life, and many of his principles have been reflected by the club. The Forever Green platform has five pillars, the first of which is climate action, and the objective that Real Betis will continue to source more renewable energy for its 50,000-capacity stadium and other properties.

Becoming the first football club to sign The Climate Pledge is also a significant step, both for Betis and for the movement. The joint venture has obviously identified sport as key industry (culturally more than operationally, perhaps) to drive climate neutrality and make the concept understandable for the general public. Amazon’s acquisition of the naming rights for the venue to be used by newly-established NHL Seattle Kraken, and naming it The Climate Pledge Arena, was a clear and high-profile indication that sport is an important method of spreading the word.

Sally Fouts, director of The Climate Pledge, said that she “hoped” that other sports teams would “follow Real Betis’ leadership” and make the commitment.

By making the pledge to be net zero carbon by 2040 – 10 years ahead of the commitment made by most nations during the 2015 Paris Accord – also puts Real Betis in distinguished company. Not only is it the first sports team to make the pledge, it is one of only 11 pioneering organisations in the movement. The club can count Amazon, Best Buy, Infosys, McKinstry, Mercedes-Benz, Oak View Group, RB Consulting, Schneider Electric, Siemens, and Verizon for company to date.

The other four pillars of Forever Green are: recycling, mobility, nature and sustainability within the club. All of which have an outward focus.

Forever Green’s recycling element, for example, is centred on “creating a recycling culture among fans”. Similarly, its mobility strategy is about enlisting fans “to be the club’s main allies in the fight against the climate crisis” by using electric vehicles, public transport or cycling to matches.

In a show of unity, Haro was flanked by Spain’s secretary of state for energy, Sara Aagesen, and (virtually) by La Liga president Javier Tebas and Real Betis goalkeeper Claudio Bravo during the programme’s unveiling.

The former threw her support behind the club’s proposals, including those focused on energy efficiency and renewable energy. Earlier this month, Aagesen unveiled Spain’s national €8.9bn strategy to become a hydrogen superpower as one of its methods to achieve carbon neutrality by 2050.

Bravo’s involvement highlighted Real Betis’ plans to put players at the heart of its communication and advocacy. Indeed, Bravo was able to articulate the link between the club’s sustainability work, and his home country of Chile positioning itself as a “renewables powerhouse”, with almost half (47%) of the nation’s power supply coming for alternatives to fossil fuels.

However, perhaps the most interesting piece of information from the press conference was delivered by Tebas, who acknowledged that while Real Betis was indeed a sustainability leader in Spanish football, his vision is to see this replicated among all of the top teams.

One initiative detailed by Tebas is a guide created by the league to help its clubs navigate through the complex world of non-financial reporting. The sustainability reports, he said, would help clubs “show what they are doing for the environment and society”.

If Real Madrid and Barcelona – the two most popular teams in Spain, if not the world – were encouraged to adopt the same sustainability mindset of Real Betis, that could be hugely significant in engaging millions of people. That’s not to mention other high-profile teams playing in the league, such as current UEFA Europa League champion (and Real Betis’ fierce city rival) Sevilla, Atletico Madrid, Valencia and Basque giants Athletic Bilbao and Real Sociedad.

Then, if La Liga clubs demonstrate a united front, with all or the vast majority publishing non-financial reports and becoming systematic about climate action like Real Betis (perhaps even becoming signatories to The Climate Pledge, then the onus will be on other leagues – the English Premier League, Italy’s Serie A, the Bundesliga, and Ligue 1 in France – to not only put pressure on their clubs, but support them in achieving clear objectives.

These leagues, of course, have their own trailblazers; Arsenal in the Premier League, VfL Wolfsburg in the German Bundesliga, Juventus in Serie A, Olympique Lyonnais in Ligue 1.

But if a significant proportion of clubs in these leagues can do half of what Real Betis is trying to achieve, then the potential impact in terms of reaching people is great. Because of its cultural significance across the world, it’s important for the sport and sustainability movement (indeed, the whole shift to the low-carbon economy) that football is seen to be part of the solution to climate change. When teams like Real Betis move the needle and force others into action, that can only be an immensely positive thing.