The next evolution of football’s greenest team 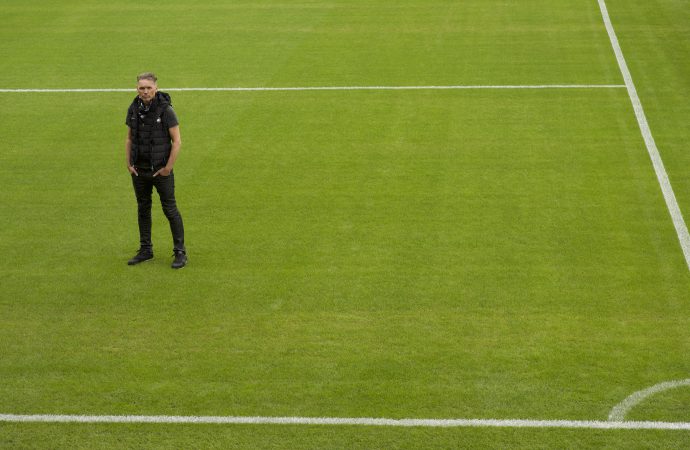 The benchmark. That’s what Forest Green Rovers is when it comes to environmental sustainability in sport.

More than any other entity in football (perhaps even sport in general), Forest Green has carved out a core purpose that goes way beyond winning matches. A purpose that focuses sharply on climate change, and using its platform and influence to drive climate action among its stakeholders.

For more than two years the club has been climate neutral. Its stadium has been powered by renewable energy since it was acquired a decade ago by renewables company Ecotricity, which has its company logo emblazoned on the team’s 50% bamboo kit. And all of the food it serves is vegan.

But even benchmark organisations have to evolve to keep themselves ahead of the pack. And as Forest Green’s platform and influence grows, so does its ambition.

The fourth-tier provincial club for the south-west of England, however, doesn’t really do things in a conventional manner. Even so, it raised eyebrows when Héctor Bellerín, the Arsenal and Spain defender, and Robert ‘3D’ Del Naja, of Massive Attach fame, joined the club as shareholders in the space of a month.

Both Bellerín and Del Naja (below) are high-profile environmentalists. The former has used his platform as one of the most recognisable footballers in the Premier League to consistently discuss the perils of climate change and to advocate for a more sustainable lifestyle. He is vegan. He drives an electric car. And he planted 58,000 trees in the Amazon Rainforest after pledging 3,000 per Arsenal victory at the tailend of the interrupted 2019/20 season.

Del Naja wrote in The Guardian last year about the environmental problems posed by live music events and grappling with the 93% of carbon emissions generated by audience transportation. As a result, Massive Attack commissioned the Tyndall Centre for Climate Change Research to “map the full carbon footprint of typical tour cycles”, looking specifically at band and travel production, audience transport, and venue.

Indeed, before the Covid-19 crisis threw the live events industry, including sport, into disarray, the famous British dance act had been preparing for a “super-low carbon gig” in Liverpool in 2020. The gig has since been postponed.

Talking to The Sustainability Report, Vince explains that Del Naja, Forest Green Rovers’ new artistic director, can help the “world of sport and the world’s of art and creativity” collaborate to further systematic climate action.

“And with Héctor, it’s been about finding interest from the elite levels of sport,” he adds. “Players, at that level, using their platform for good like Héctor is a fab thing. He saw what we were doing and wanted to be involved.”

Bellerín and Del Naja instigated contact with Forest Green Rovers, and both now own stakes in the club. The latter started speaking with Vince around the time Massive Attack began to plan its low-carbon gig and, once he saw the Arsenal footballer become a shareholder, Del Naja – “a massive football fan” – also wanted to “pump some money in”.

“I said to him, why not actually get involved? I had this feeling that there was something he could bring to the club. So I asked him to be our artistic director.”

Vince continues: “Currently, we don’t really know what that actually means. It’s just a new area to explore, and some great things are going to come of it. It’s a bold step into the unknown really; let’s see if we can overlap the fields of art and music with the field of football to see what we can get.”

One conversation Vince and Del Naja are having is around improving the sound system at the stadium, which is “rubbish in musical terms” and will make “sound an important part of the football experience”.

The pandemic has so far limited Vince’s meetings with Bellerín to Zoom encounters, but the pair have talked about collaborating on a sustainable clothing line due to the right-back’s keen interest in fashion.

Forest Green’s footballing ambitions are focused on the club reaching The Championship, the second tier of English football, one below the Premier League (the Forest Green Rovers kit has one filled star and two empty symbolising its one promotion to League Two and the two needed to reach The Championship). Asked if Bellerín – one of the world’s most sought-after defenders – could eventually don the green and black of Forest Green on the pitch, Vince indicated that it could be a possibility in the distant future.

“Héctor said to me we should be thinking about the Premier League one day. I think The Championship is quite ambitious, but once you’re there then your horizons change, don’t they?” he muses. “But I think it’s possible that we might meet in The Championship; by the time we get there he might be ready to play there.”

During a panel session at the Sport Positive Summit in early October, Vince stunned delegates by revealing that Forest Green Rovers had seen its sponsorship revenue double over the last year, despite Covid-19 rocking the sports industry and traditional sports sponsors alike.

Due to Forest Green’s unique approach to sustainability, many of the companies that are partnering with the club are not necessarily traditionally involved in sport. Vince explains that many new partners come from “the emerging or developing field of environmental products and services”.

Its current crop of partners includes: Grundon, a family-owned waste management firm with aspirations to recycle 100% of its waste; Quorn, which helped the club achieve its vegan-only menu; Sea Shepherd, an international nonprofit focused on marine conservation; and Ecotricity, the renewable energy company founded by Vince, which is the majority owner and principal sponsor of the club.

The club’s latest partnership – a stadium naming rights deal with smoothie-maker Innocent Drinks – is probably the most eye-catching. Last month, the company acquired The New Lawn’s naming rights, but instead of calling the venue The Innocent Drinks Stadium, it will give fans the opportunity to vote on the name of their choice with season ticket-holders getting the final say.

“I guess they’re (sponsors) being drawn to us because we stand out in the crowd as a football club breaking this ground,” says Vince. “We never really pursue the business case, but it follows. I’m a firm believer that if you do the right things for the right reasons, then good things will follow.”

Although the club has seen an upturn in fortunes, Vince acknowledges that the coronavirus pandemic has hit the sports industry hard. Forest Green Rovers was a founding signatory of the UNFCCC’s Sports for Climate Action Framework in December 2018 – and while that movement has experienced momentum over the past two years, with many sports entities pledging to measure, reduce and offset their carbon emissions, there have been some concerns that action on climate change could take a back seat to addressing the pandemic that is currently dominating global discourse.

Vince made it clear during the summit that the “fingerprints of the Covid crisis” – the way we eat, the way we travel and the way we power ourselves – are the same for the climate crisis, and addressing human health and environmental issues have similar solutions.

He explained that Forest Green’s new stadium complex, Eco Park (which was approved earlier this year), was an example of a project that took into account all aspects – economic, social and environmental – of sustainable development.

The £100m development includes a modern wooden stadium designed by Zaha Hadid Architects and a business park that will provide 4,000 jobs. Biodiversity in the area will be boosted by 16%, with wetlands, canals and miles of trees and hedgerows incorporated.

“Eco Park will push the boundaries of sustainable development.”