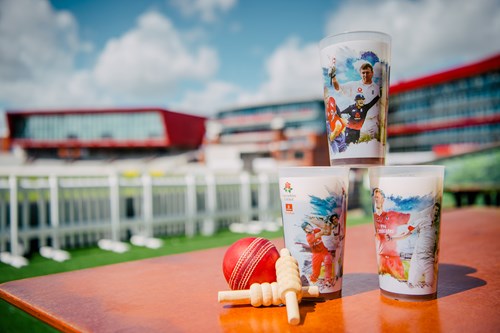 Lancashire County Cricket Club, the stewards of the stadium, has partnered with manufacturer Green Goblet to launch the cups

Lancashire County Cricket Club has launched a reusable cup system to reduce its reliance on single-use plastic ahead of next year’s Cricket World Cup.

The cups, which will cost fans a £1 deposit, will be used for the first time on 24 June, when England hosts Australia in the fifth Royal London One Day International.

To incentivise spectators to use the cups, they have been designed with pictures of England players. Fans will also be able use the cups outside the ground.

“We estimate that we use about 250,000 single-use plastic cups every year, which is something we’re determined to change,” said operations director Anthony Mundy.

“With major fixtures heading to Old Trafford, 2018 is the perfect opportunity to introduce the new cups. It’s also a great trial, before rolling the initiative out on a massive scale for the World Cup and Ashes in 2019.”

The club is expecting 65,000 spectators to attend games over the summer, and has prepared a special club version of the cups for county cricket spectators.

To support the project, Lancashire CCC has launched its #TakeMeHome campaign to encourage fans to share pictures using the reusables cup, with one entrant winning a signed cricket bat. Spectators will also have the chance to donate their deposit to charitable foundations.

“The club will benefit from having less clear up and the supporters will benefit by having a sturdier cup to drink out of, meaning less spillage and a cleaner stadium to enjoy,” added Alex Hopkinson, director of Green Goblet, the manufacturer of the cups.