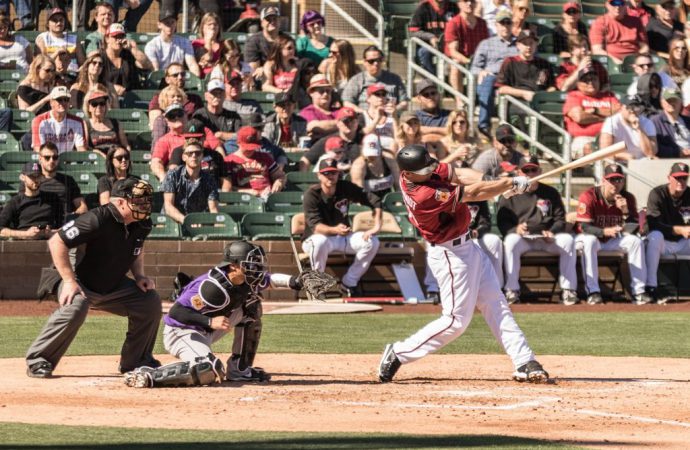 When Salt River Fields opened in 2011 it set the standard for modern baseball facilities. Seven years later, the LEED Gold venue is being made even more sustainable – and the results will be reviewed by Major League Baseball

When Colin Tetreault was devising policy as head of sustainability for the Mayor of Phoenix, he knew that developing another generic government recycling programme was not going to cut it with the natives. He understood that to make the scheme a success he had to create a genuine emotional connection. So he searched for partners in two industries he knew were close to the heart of most local people – healthcare and sport.

Being a Phoenix native, Tetreault was friendly with the leadership at the Arizona Diamondbacks, the state’s Major League Baseball (MLB) franchise. He was aware that the club had been trying to make its Chase Field stadium as eco-friendly as possible, so he spotted an opportunity to engage the masses with recycling. Once he caught wind that the hugely respected healthcare provider Mayo Clinic would also be on board, he concocted a plan to develop a major recycling and diversion programme (focused on materials management and circular economy) for Phoenix, backed up by two household names.

“So we built the programme. If anyone said this was not the real deal they would have had to tell one of the most respected Major League clubs and the best healthcare organisation in the world. These are smart medical and business people. If these guys do it, maybe we should listen up. So we built a case of support.”

Tetreault has since swapped the Mayor’s office for Arizona State University (ASU), where he heads up the Julie Ann Wrigley Global Institute of Sustainability, but his relationship with the Diamondbacks endures. His latest project was a sustainability partnership with MLB and the owners of Salt River Fields – the training facility of both the Arizona Diamondbacks and Colorado Rockies – to help the venue hit its ambitious target of becoming a zero waste facility.

It was a significant endeavor given two circumstances: (a) the project took place during the Spring Training season (the busiest time of year for Salt River Fields), and (b) the project was widely recognised as a pilot project for MLB as it attempts to boost its sustainability credentials.

“We tossed some big juicy ideas to MLB and to the Diamondbacks and asked if ASU could act as an honest broker, and everyone was happy with that,” explains Tetreault. “I knew they want to do more but MLB has a pretty efficient shop in terms of the number of people who work there from a sustainability perspective.

“So we said ‘let’s get our toes wet’. We wanted a case study – a pilot – to provide data that would perhaps assuage the concerns of other clubs thinking that becoming more sustainable is scary stuff. Actually it’s not. We want to show that it’s safe, we can add value on a small scale and do it all on a shoestring budget.”

There are few sights more appealing to local baseball fans than Salt River Fields during Spring Training. The venue is one of 10 ballparks in Arizona to host Spring Training matches of the 15 Cactus League MLB franchises (MLB splits off into two leagues – Cactus and Grapefruit – for the spring off-season ahead of the commencement of the full league season). For Arizona, the Cactus League has a huge economic impact, bringing in $600m to the state in tax dollars and sports fan spending every year.

Part-owned by the Salt River Pima-Maricopa Indian Community, Salt River Fields is the only Spring Training facility to be built on Native American land. It was also the first to be rated to a LEED Gold standard following its opening in 2011 (see below). Sustainability is woven into its DNA.

But there’s always room to improve, and after seven years in operation the time was right to develop a strategy to make the facility even more green.

“Since we got going we’ve always tried to have a good recycling plan, but we wanted to take it a step further this year with our partnership with the ASU,” Salt River Fields general manager Dave Dunnetells The Sustainability Report. “We’ve had pretty good numbers with recycling and green waste, but we weren’t doing a lot with things like compost, for example.

“I also don’t think we engaged fans quite enough. People would go up to the garbage can with recyclable material, and unintentionally they might put it in the wrong container.”

So Tetreault came forward with a plan: set 11 of his best senior and graduate level students to work on creating concrete initiatives to address the few flaws in the venue’s environmentally sustainability practice.

“We got dropped here three weeks before opening day of Spring Training and began messing up all of their best laid plans,” Tetreault laughs. “It was like ‘meet the nerd from ASU who’s coming to mess things up’. But I didn’t get a ‘no’ from anybody. Everyone rolled up their sleeves and said ‘let’s do something awesome’. It’s very refreshing, and great leadership of a tight team.”

Step one was to get buy-in from the fans. Even the most enthusiastic defender of the environment is keenly aware that to get a bunch of sports fans onside requires an incentive other than ‘saving the planet’.

And the best way to talk to fans is to get the players – their heroes – involved in a meaningful way, and to create events they can all rally round and enjoy.

“We shot a PA with a former pro player talking about the power of sustainability,” explains Tetreault. “We branded it: ‘If you want to be a recycling All Star do this, don’t be a recycling rookie. Hit a home run.’ It’s cute, but at the same time we’re trying to approach fans like that. It’s my dream to get a pro or an ex-pro at each club to do this.”

The ‘Recycle Rally’ – a mass clean-up orchestrated by the PA system and jumbotron, where fans pass their recyclable goods to the end of their row during the eighth inning of every game – has also helped to get spectators engaged without “feeling preached to”. The activity managed to save a significant amount of money in operational costs because cleaning up after the match was less laborious.

Measuring fan engagement was not limited to the anecdotal observation that people tended to be smiling when taking part in the initiatives. ASU students went after cold, hard data using fan engagement surveys, as well as broader primary and secondary research about fan preferences and expectations. After all, the MLB needed to see something tangible when the partnership came to an end.

The partnership officially ended in April 2018, with a report of the results sent to MLB for scrutiny. But the relationship between ASU and Salt River Fields will continue in the future with some longer-term strategies for sustainability.

A comprehensive compost programme is the next strategic priority for Salt River Fields, with leftover hot dogs and lots of green waste from grass clippings (the facility is 140 acres with 13 full playing fields and four half fields). Dunne also reveals that he is in talks with the venue’s concessions partner to make napkins, disposable cutlery and plates all compostable

“We’ll continue this partnership and continue to do a better job, really raise the profile, awareness and our numbers. It’s important the Salt River community looks after Planet Earth,” he continues. “We want zero waste here at Salt River Fields. It’s a tough one to achieve, but that’s our goal.”

If the target of zero waste is achieved, and the study can prove sustainability lowers operational costs, then MLB can’t afford to ignore it. Tetreault’s plan is to spread the strategy “across the entirety of the Cactus League” and “save money for clubs, demonstrate strong environmental leadership and add value to fans”.

He adds: “We’re trying to build a robust ecosystem around the power of sport, starting in a very modest way with Spring Training, and building from there.”

When it was announced that a new training facility was to be built for the Arizona Diamondbacks and Colorado Rockies, there was a palpable feeling that this facility would set the standard for modern baseball venues – particularly from an environmental aspect.

And so it came to pass. When Salt River Fields opened to the public in 2011, it became the first LEED Gold baseball facility in the world – and almost hit Platinum.

“The honest truth is we wanted to hit (LEED) Silver,” says Mo Stein, principal at HKS, the architecture firm behind the facility. “But we found that we could hit Gold fairly easily and we weren’t that far from Platinum.

“It came down to consistency, belief and communication. As a design team we had sustainable goals in mind. Our client supported these goals and when you have that kind of alignment it’s easy to have a conversation about sustainability and what it means.”

Another huge advantage was the wealth of natural resources in the area, which meant that building materials were locally sourced and sustainable. The concrete blocks were quarried in the Arizona area and the aggregate came from the Native American community (the venue is the only training facility built on Native American land).

Stein explains: “We were dealing with a culture that had sustainability rooted in it for centuries. We talked about sustainability and we spent time in the community to understand why sacred places were important to them.”

Other sustainable features include: a lake created from reclaimed rainwater and recycled water to keep the pitched green; the salvation of more than 100 trees on site; recycling waste building materials; and temperature controls to conserve energy.

And while the main motivation for keeping things sustainable was “environmental stewardship”, it doesn’t hurt that operational costs are significantly lower than before, or when compared to other training facilities.

“We have two teams here the year round playing in 110 degrees (fahrenheit) of heat in the summertime,” explains Dave Dunne. “Each team has a 90,000st ft building, which are in use between 5am and 10pm. But the energy bill is remarkably lower than what I was paying in a much smaller venue I managed previously that wasn’t used as often.

“That’s a huge advantage not only for the environment, but the pocket book too. We’re not paying outrageous sums every month.”