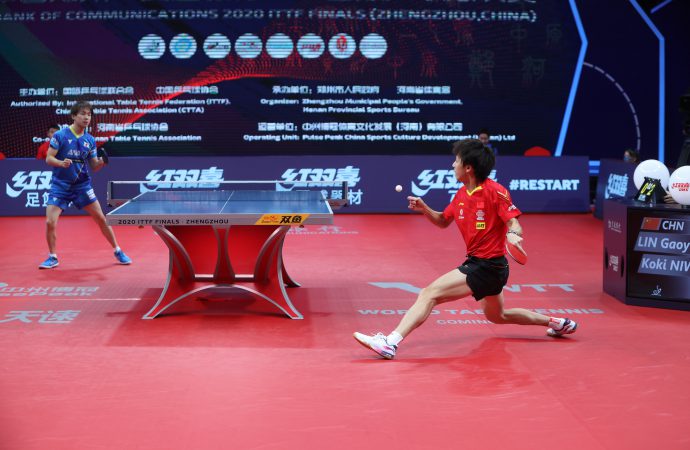 The beauty of the Olympic and Paralympic Games is the breadth and diversity of their events, but one area of commonality among many of the sports on show at the Tokyo 2020 Summer Games is a greater focus on environmental sustainability.

The Sustainability Report is exploring some of the recent work and initiatives of the international sports federations being represented. In this edition, we’re focusing on table tennis (ITTF), athletics (World Athletics) and taekwondo (World Taekwondo).

Over the last five years, the International Table Tennis Federation has consistently one-upped its environmental sustainability efforts. In 2016, during World Table Tennis Day, the organisers of an event in Nairobi, Kenya, planted 200 trees to showcase that the table tennis community takes care of the environment. The 2017 iteration of the event at the beach of Santa Marta, Colombia, a sign was displayed saying ‘Let’s take care of our planet’.

At the 2018 World Table Tennis Championships in Halmstad, the ITTF launched the ITTF Foundation to guide its sustainability efforts, among other projects, and distributed a souvenir at a cocktail reception: In little wooden boxes attendees were gifted a small spruce tree, one of the world’s oldest known living trees stating “Let’s make a change and grow together!”.

In 2019, the ITTF Foundation launched a Table Building Course with the support of Ping Sans Frontières. The course instructs participants on how to build table tennis tables. The vision of the program is to increase self-reliance in the communities around the world that play table tennis, and to reduce shipping and waste; if tables can be built in the communities where they’ll be used, with locally sourced materials, the transportation and shipping costs of raw materials and finished products is vastly reduced. Further, in some cases, table making can serve as a source of income for local builders.

In 2020, during the Covid-19 pandemic, the International Table Tennis Foundation doubled down on its commitment to sustainability, forming a Sustainability Working Group and holding two meetings in July 2020 with members of the ITTF Executive Committee, ITTF Foundation and Professional Staff in attendance.

In the first meeting, a strategic approach was outlined focusing on the “3 P’s”: planet, profit and people, identifying key areas of focus from event, equipment and operational perspectives. At the second meeting, attendees worked to align the ITTF’s approach with the IOC’s sustainability efforts and the UNFCCC. All signs point to consistent progress toward environmental and social sustainability goals.

Few sports organisations have made themselves synonymous with a particular sustainability issue in the same way World Athletics has with air quality. Since 2018, the international federation has monitored air quality at a number of events, integrated air quality monitors within several tracks, and conducted research with the ultimate objective of discovering the strength of the correlation between poor air quality and diminished health and performance of elite and recreational athletes.

It’s a good example of an organisation identifying an environmental issue that is material to its main stakeholders (i.e. athletes) and playing its part to make a positive difference.

Indeed, World Athletics’ sustainability strategy (published in early 2020) features air quality as a key element, with some of its most eye-catching targets focused on establishing low emissions zones around stadiums and athletic arenas, and insisting that air quality targets are “understood and monitored” by event hosts.

But the wide-ranging document doesn’t stop at one issue; World Athletics has a number of ambitious 2030 targets. In terms of climate action, the UNFCCC Sports for Climate Action Framework signatory has committed to carbon neutrality, with a 10% reduction of emissions annually compared with its 2019 baseline (it also wants 100% of its sanctioned events to commit to carbon neutrality targets).

More broadly, World Athletics expects all of its sanctioned events to commit to its Sustainability Charter, with all World Athletics Series events delivered to ISO 20121 standard by 2030. The organisation is also keen to make an impact on stakeholders within its sphere of influence by asking all of its corporate partners to “engage and activate” around sustainability during the same timeframe.

When the strategy was unveiled, Seb Coe, the president of World Athletics, said he wanted the organisation to contribute to a “cleaner, greener and more equitable future for everyone”.

“In the modern world, it has become apparent that our athletes and fans expect more from us than good governance of our sport,” Coe added. “They also expect us to be good global citizens, to take a leadership role in issues that affect the wider world and communities. Sustainability is one of the great global challenges.”

At the signing of the Framework, World Taekwondo president Chungwon Choue said: “Climate change is an issue that affects all of us and is something we all have a responsibility to take action against. That is why we have committed to implementing the principles of the Sports for Climate Action Declaration which are aligned with key recommendations of our Sustainability Strategy.”

The first World Taekwondo event under the new strategy – the Manchester 2019 World Taekwondo Championships – featured several sustainability initiatives including, for example, that all 14 hotels housing 3,000 participating athletes were within walking distance of the venue. From an equipment standpoint, the mattresses used for the sports competitions have since been reused by the British Taekwondo Federation.

Toward the end of 2019, World Taekwondo was among ten Olympic and non-Olympic sports federations to be awarded the “Carbon Initiative Award” by the IOC and its Worldwide Olympic Partner Dow. The award was created to incentivise international federations and National Olympic Committees (NOCs) to work towards a tangible framework that reduces their greenhouse gas emissions.

In order to comply, International Federations are required to present detailed data on their annual carbon footprint, as well as carbon reduction plans. World Taekwondo was recognised for its Sustainability Strategy, its commitment to the Sports for Climate Action Framework, and for early progress toward sustainability reporting and carbon reductions goals.

With the 2020 and 2021 World Championship events cancelled due to the pandemic, World Taekwondo got creative with event delivery and began hosting online competitions. The first iteration of the Online World Taekwondo Poomsaw Championships was held in November 2020. It was deemed a massive success, attracting 1,560 people from 98 countries, without producing emissions from travel or additional waste, typical of in-person events.

The 2021 edition of the event went one step further, hosting the event quarterly with different target audiences at each iteration (e.g. registrants were divided into their respective age categories, para categories, and open categories, and attended one or more of the four events accordingly). The intention of the Championships was to open the event to families and people of all ages as part of World Taekwondo’s commitment to contributing to a healthy society, while reducing the environmental footprint of the sport. Maximising the opportunities presented by virtual competitions, World Taekwondo has committed to hosting more online events in future, such as the World Taekwondo Super Talent Show.