Houston, the energy transition, and its World Cup bid 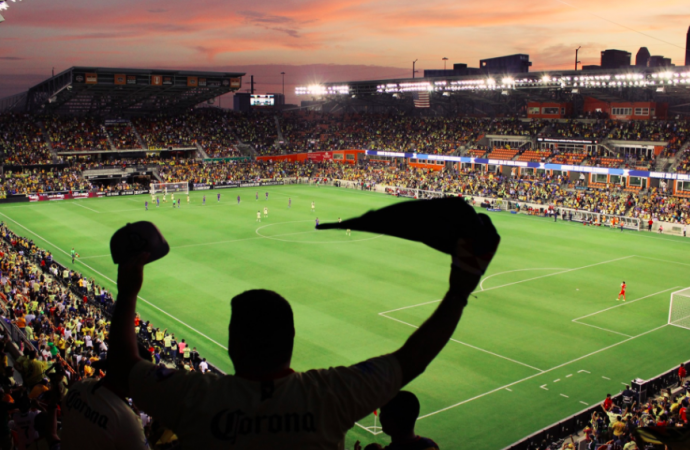 President of the Houston 2026 bid committee, Chris Canetti, wants a low-carbon future to be the legacy of the football tournament in the ‘energy capital of the world’

There’s no way around it; Houston is, and probably always will be, synonymous with the oil and gas industry. Dubbed ‘the energy capital of the world’, the Texan city is home to 600 exploration and production firms, and large bases for companies like BP, Shell, ExxonMobil and Chevron.

But according to its mayor, Sylvester Turner, that association actually positions Houston as the city best-equipped to tackle climate change.

Houston finds itself in a unique position: its economy is based primarily on the energy sector, most notably oil, but the city is facing significant climate change-related threats. Tropical storms and floods have been common over the last few years, and extreme weather is likely to continue. In a worse case scenario, where global emissions remain high, Houston can expect a high temperature of 106°F by 2050 (compared to 99°F between 1970-1990), 23 days above 100°F (1 day), and heat waves lasting 27 days (2.5 days).

Therefore a seamless transition away from fossil-based energy to renewables is going to be crucial for Houston to keep its economy robust, but also take the action needed to keep its residents away from the worst climate peril.

Although this will be easier said than done, the energy transition forms a major part of Houston’s Climate Action Plan – a “science-based community-driven strategy” taking the city down a “more sustainable path”.

The main ambition is for Houston to be carbon neutral by 2050, in line with the Paris Climate Agreement, but there are a number of shorter-term targets the city will try to achieve in the interim. For instance, by 2025 Houston wants to build 500 miles of cycling lanes, double the current rate of PACE (Property Assessed Clean Energy) projects, and incubate 50 ‘Energy 2.0’ companies that focus on green energy.

A year later, the city is hoping to host matches during the FIFA World Cup 2026, which is taking place in the US, Mexico and Canada. And while sport doesn’t feature heavily in the Houston Climate Action Plan, a successful bid for the world’s most-watched sporting spectacle will move it up the agenda.

“If we’re awarded the World Cup, we will definitely become part of the Climate Action Plan strategy,” Chris Canetti, Houston 2026 president, tells The Sustainability Report. “The city is going to look at everything from the airports to the hotels – all the different places that will be impacted by the World Cup.”

The Houston 2026 organising committee will find out later this year if its bid to host the tournament has been successful. It’s up against a host of US cities, including LA, New York, Washington DC, Dallas, Kansas City, Denver, Baltimore, Atlanta, Philadelphia, Nashville, Seattle, San Francisco, Boston, Cincinnati, Miami, and Orlando. Ten cities from the US will be chosen alongside three apiece from Canada and Mexico.

Canetti highlights a number of benefits to hosting matches in Houston: being the fourth largest city in the US, its diversity, its central location, and its pedigree hosting major sporting events and competitions.

“But we didn’t want to take any of that for granted, and we felt like we needed to be more strategic and come up with a great legacy strategy,” Canetti says.

Sustainability, he adds, is a “big part” of that strategy, with the organising committee working with Lara Cottingham, Houston’s chief sustainability officer, to kick off this piece of work.

The first part of the puzzle is to align with the sustainability goals of FIFA and the wider organising committee. United 2026’s winning bid book had a significant section on ‘sustainable event management’, featuring commitments around sustainable procurement, stakeholder engagement, GRI reporting, as well as a number of human rights and social initiatives – another key issue Houston 2026 aims to help tackle.

Indeed, as part of Houston’s three-pillar strategy – growing the game, fan experience and social and environmental responsibility – the organising committee will submit a 200-page report to FIFA outlining the human rights risks and opportunities of hosting matches in the city’s NRG Stadium.

On the recommendation of Cottingham, Houston 2026 instigated a partnership with the Council for Responsible Sport, a nonprofit that independently verifies the social and environmental aspects of sporting events. It has certified events such as the Bank of America Chicago Marathon, the NCAA Final Four, and the Chevron Houston Marathon.

During the initial phase of the partnership, a team of graduate students identified by the Council, that attends the University of Oregon’s Lundquist College of Business, conducted a “comprehensive feasibility study” against the organisation’s newly-developed Standards for Organisations.

The Council for Responsible Sport’s Standard for Organisations are built around four core principles: leveraging the power of sport, resolving climate change, enabling social justice, and the ethical business of sport. It includes 21 indicators and 96 actions across five broad scopes, including planning and communications, procurement, resources management, access and equality, and community legacy.

One of the key planning and communications actions includes “a public statement of accountability made by the president or chief executive”, for example, while a procurement requirement is to “request fuel use information from vendors and suppliers”.

And while the assessment will help “identify the viability” of Houston 2026 achieving certification, Canetti stresses that the committee won’t yet be certified “six years in advance”.

“We felt it would be good to work with an organisation that knows all the best practices and standards, so we reached out early on in the process and proposed the concept of us working together and picking their brains as we built up our strategy,” he explains.

As the home of NASA and Texas Medical Centre, the largest of its type in the world, innovation will play a key part in the delivery of a sustainable legacy, says Canetti, adding that playing a role in the transition to renewable energy is an ambitious objective.

“A number of major energy companies based out in Houston are partners with our World Cup Bid Committee – Shell, Chevron, NRG, Enbridge,” he says. “Obviously, they’re all going to be leaders in green energy solutions into the future. All of these organisations are very engaged and working with us, and one of our missions is to have the greenest World Cup event that we can possibly have, reducing carbon emissions. And those folks are going to engage with us and be key stakeholders in the process of how we think that through.”