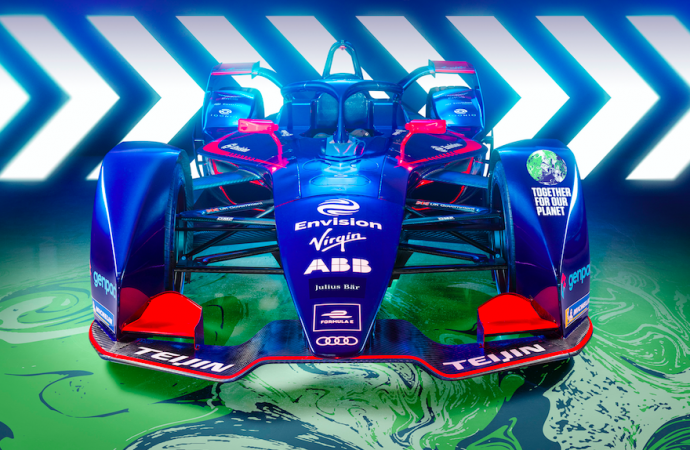 Climate change movement first, sports team second. That’s how Formula E team Envision Virgin Racing bills itself. So it’s no surprise that during the now rescheduled COP26 taking place in Glasgow this November, the team will be flying the flag for sport’s role in the low-carbon transition.

Formula E, the competition in which Envision competes, has been advocating for e-mobility, climate action and cleaner, less-polluted cities for the best part of a decade.

But with its Race Against Climate Change platform, in which it advocates for the acceleration of that transition through its events, campaigns and partnerships, Envision Virgin Racing is one of the only sports properties that can legitimately claim to have a genuine purpose beyond results on the track.

As a result, it will be present at the major climate change conference, and will use its own platform to promote COP26 during the Formula E season.

What does that look like? Well, Envision’s cars will be branded with COP26 branding and its ‘Together for our planet’ slogan. And, as expected, the team will be a vocal endorser of not only electric vehicles, but also renewable energy (Envision, the team’s owner, is a Chinese windtech company).

“The car is the biggest asset and collateral we have,” Jennifer Babington, the team’s operations director and general counsel, tells The Sustainability Report. “So we took a step back and said, ‘In an ideal world, who would we want to partner with? Who’s got a message that they need to get out this year? And how do we support that?’

“So, we offered COP26 a space on the car. That’s collateral that we could be selling and making revenue from, but we wanted to make a strong commitment. We’re the only team in the competition that doesn’t have a car or product to sell, so winning for winning’s sake isn’t enough. We have to win for a purpose.”

For Babington (above right, next to managing director, Sylvain Filippi), who previously worked at the UK Green Investment Bank, collaborating with the UN is “like a dream”, particularly in the “sweet spot” of racing and sustainability.

Envision Virgin Racing was actually the first motorsports team to adopt the UNFCCC’s Sports for Climate Action Framework, committing to measuring, reducing and offsetting all of its carbon emissions. Indeed, the team has been carbon neutral since last year, embarking on a “very stringent” reduction programme with the Carbon Trust and obtaining Gold Standard carbon offsets for the emissions that it can’t avoid.

But in actual fact, this partnership has been a number of years in the making. According to Sylvain Filippi, the team’s managing director, conversations around COP have been happening since 2016, when a Formula E race and COP21 occured over the same period in Marrakech, Morocco.

“We have the same shared objective,” Filippi says. “To accelerate conditions to win on climate change. Of course, sustainable transport and e-mobility are huge levers to achieve that. Everything is in place for a really exciting partnership in which we will leverage our strengths.”

One of the main themes of COP26 is the transition to electric cars, with the UK Government showcasing its roadmap to phasing out the sales of combustion engine vehicles by 2030. Globally, the number of electric vehicles purchased has mushroomed from the 330,000 during Formula E’s debut season in 2014 to just over two million in 2019. And while those numbers are still small, the UN and Envision are hopeful that COP26 can keep momentum going in this space.

As well as the technical expertise around electric vehicles, the team will try to harness Formula E’s “gigantic media platform” to get fans and those interested in the sport engaged with COP and wider actions and policies built around climate action.

More than that, Envision Virgin Racing’s status as a climate change movement is also important when it comes to credibility. From the work Babington oversees in operations, to Filippi’s leadership, climate change is at the heart of every conversation.

“We’re only a 40-person team,” says Babington. “Our people are doing day-to-day jobs running a team that’s racing around the world. Pulling all the sustainability data together and creating a strategy is late night and weekend work for us. We’re really committed.”

“For sure, we are one of the very few sports teams whose sole focus is to work on climate change. Our marketing and commercial teams talk about sustainability all day long. Our engineers, mechanics and drivers are dealing with electric cars all day long as well.

“Being totally fair, there’s a very small distance to travel between our core business and talking to COP about climate change. We’re working to make cars faster and more fuel-efficient so that people can drive better electric cars sooner rather than later.”

Although there’s uncertainty about the activations the pair can do in the run-up to November in light of the continuing Covid-19 situation, both Babington and Filippi are keen to generate as much positive impact as possible, including utilising sport’s cultural power as a convener for other industries and companies.

“We identified COP26 and the UN connection as two pieces that we really wanted to pursue,” Babington explains. “There are lots of crossovers and connections and there’s a lot more of this partnership to come.

“We have an incredible facility up in Silverstone that we’d be delighted to host people at to help facilitate discussions about climate change that are perhaps harder to have when you’re sitting opposite each other at a desk. Why not use the excitement and passion generated from Formula E to make great B2B business connections? Let’s use our machine to help connect and make a better space in the sustainability world.”