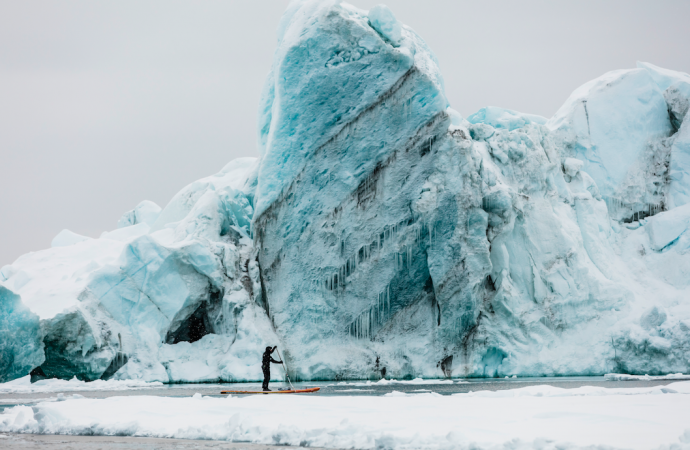 As Michael Walther stood on his 34 inch-wide paddleboard, staring at the melting Greenland ice cap in front of him, then turning his gaze to the Arctic waters below, he found himself overcome with terror. His fear did not stem from the possibility of falling into the dark, freezing ocean, however; Michael is an experienced paddleboarder used to the cold waters of Northern Germany. No, his fear was brought on by the fragile and uncertain future of our planet, brought on by climate change, and encapsulated by the overwhelming sight facing him.

But Walther admits that it wasn’t the physical landscape that sent shivers down his spine. He is too young to have seen the ice sheet in its full glory to make comparisons. What scares him most, he says, is the indifference of people.

“If you know something is wrong, the next step is to change it,” he tells The Sustainability Report. “But many people forget about taking the second step. Many people know about climate change but nothing happens. People are buying the same cars. Before the coronavirus, they were flying all over the world. That scares me a lot.”

Walther’s pilgrimage to Greenland was motivated by the desire to get people to act. He paddleboarded 200 kilometres along its west coast to bring the topic of climate change to a whole new audience of people. He shot a movie to chart his adventure, which was well-received by many international film festivals.

And he continues to use his paddleboard as his weapon of choice for climate activism. Most recently, Walther paddled 1,300 kilometres between Basel in Switzerland to his hometown of Kiel, talking to people as he crossed Germany via the Rhine river. But, disappointingly, he feels the vast majority – around 70-80% of people – are “not interested” in engaging.

“That’s why I’m happy talking to the media, like the tabloid newspapers. I don’t like these newspapers, but they are reaching these people,” Walther says. “That’s also why I combine eco-projects with sport. We have to reach these people who are outside our bubble.”

Walther is one of several athletes and sports entities to have signed up to the Sports for Future movement devised by sustainability and sports marketing expert Stefan Wagner, who helped German Bundesliga club TSG Hoffenheim establish a climate ticket and sustainable textiles brand.

Sports for Future is, more or less, a sporting response to the Fridays for Future movement led by teenage climate activist Greta Thunberg. It has a number of objectives, such as encouraging sports organisations to adopt the commitments of the Paris Climate Agreement and challenging high-profile clubs, leagues and federations to aim higher and do better.

TSG Hoffenheim, Bundesliga rival Werder Bremen, the German Football Association and several notable German athletes are ambassadors to the cause.

Sport, symbolically, has a strong connection to the general public. One of the objectives of Sports for Future is to leverage sport’s popularity to focus the minds of those previously oblivious or disinterested in the climate crisis.

However, Walther believes that sport can make a more profound mark by offering the planet practical support. His own organisation, Zero Emissions, aims to teach people about climate change through water sports and the extreme adventures he embarks upon. He highlights the work of Boris Herrmann, a climate-focused professional sailor who transported Greta Thunberg across the Atlantic Ocean from Europe to New York for the UN Climate Conference in 2019, and The Ocean Race as sport’s leading lights, with the former changing its rules for the 2022/23 edition of the competition to make sure teams incorporate more sustainable features, such as renewable energy.

Walther took to his paddle board again to shoot a promotional video for Sport for Future’s latest project, Sports4Trees, which encourages sports fans to donate change at their local sports clubs or organise charity events with all the proceeds going towards tree-planting and education projects in Senegal, Nigeria, the Democratic Republic of the Congo, Tanzania and Kenya.

The project is being backed by some high-profile names and institutions in German sport, such as Herrmann, FC Bayern Munich executive Karl-Heinz Rummenigge, Deutsche Sportjugend, TSG Hoffenheim, as well as the Dietmar Hopp Foundation (founded by the billionaire SAP founder), Development and Climate Alliance, and Cologne Business School.

Nike Lorenz (above), the German international field hockey player, is also an ambassador to both the Sports for Future movement and the Sports4Trees campaign, and has become one of German sport’s most prominent climate activists.

Triggered by a change in the international hockey calendar, which meant lots more international travelling and, therefore, more carbon emissions, Lorenz and her teammates decided to establish their own reforestation project with the ambition to plant a whole forest in South Africa.

“We used to have tournaments once or twice a year, but then the FIH (International Hockey Federation) created a new league last year and we started playing nations from all over the world,” Lorenz tells The Sustainability Report. “We started travelling to Australia, New Zealand and Argentina just for one game. Once we had a game in Australia, the flew to New Zealand, then also on to China.

“We didn’t really feel comfortable with it. So I started typing this into one of those calculators where you can check your carbon emissions when you fly, and to compensate for those trips was a huge amount of money. So we had to think about different options.”

Lorenz made contact with The Grootbos Foundation, a nonprofit that protects and conserves the natural environment on a piece of land close to Cape Town. The organisation reserved a patch of land for the new forest. Each player from the team pitched in to buy trees for the forest (at €25 each), but Lorenz realised she could take it a step further and launched a crowdfunding page.

Although the crowdfunding campaign was postponed during the Covid-19 lockdown, it managed to generate €20,000 in the months leading up to February 2020, with the 800 trees getting Lorenz and her teammates close to the symbolic 2,021 target ahead of the Tokyo 2020 (now 2021) Olympic and Paralympic Games.

Away from the campaign, Lorenz continues to encourage her teammates and those around her to act more sustainably and, like Walther, finds different levels of concern about climate change in her immediate circle.

However, she is positive that her profile as a world-class athlete has enabled her to reach more people with her message.

“When we talked about the Hockey Forest the experience we had was that the intersection between sport and climate change helped us reach many more people than if we were just planting trees,” she acknowledges.

“I feel that you often lose people when you want to just talk about climate change. I can’t explain it – it’s just what I’ve experienced so far. People feel emotionally connected to sport and I feel there is a lot of potential there. If you come at them from a sports angle they may invest in it a little more than if you just approach them as an individual.”