Sport should examine its role in ‘The Great Reset’ movement 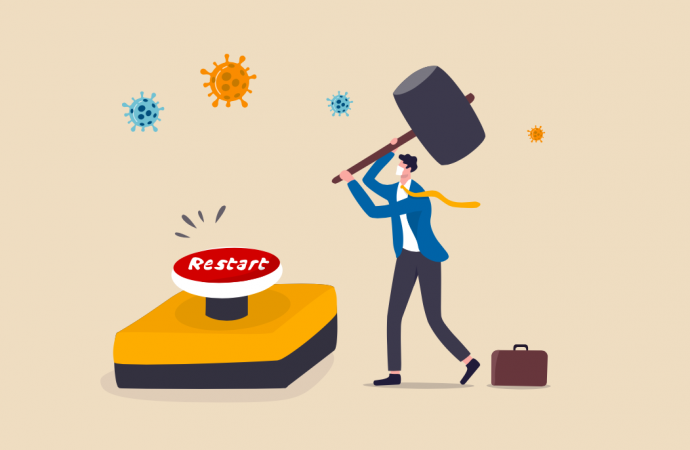 World Economic Forum has put forward a vision of a world reimagined to transform the pain of the Covid-19 pandemic into a positive change for all. Where can sport contribute?

“Are you ready to change now?”

That was the question posed to the entire sports industry during Global Sports Week by Max Patrick Fomeju, one of the event’s Young Sports Makers, to bring the maiden conference to a close.

The question was a fundamental one then at the beginning of February but, a few months later, appears even more profound. Even in the unlikely event that Fomeju’s simple but impactful call to action fell on deaf ears, a few weeks later the whole sector found itself in the position where it had no choice; it had to change.

Scores, if not hundreds, of articles have painted a picture of sport’s bleak present and short-to-medium-term future. The disruption has been unprecedented, but it’s what we do now that really counts.

The introduction of the Young Sports Makers was one of the most enjoyable aspects of the first Global Sports Week in Paris. With the carefree abandon that some of the panellists, guest speakers and moderators couldn’t indulge in, this selection of inspiring and aspiring young sports executives asked the questions many were afraid to ask, prodded, cajoled and inquired further if they weren’t satisfied with the answer.

What’s clear is that if sport wants to ‘reset’ in an optimal way during and in the aftermath of the Covid-19 crisis, young people with intelligence, ambition and courage will have to be at the heart of the conversation.

In the past few weeks alone, the influence of Gen Z has made the headlines. Marcus Rashford, the Manchester United striker and one of the most recognisable faces in European football, used his high-profile to pressure the government and help secure free school meals for children in the UK on or below the poverty line. Across the pond, the hundreds of empty seats visible during Donald Trump’s rally in Tulsa was credited to young TikTok users claiming free tickets to stop people from attending.

Back to Global Sports Week for a moment. Unveiling a new format for its second edition next year, in which several locations around the world will be involved (Paris, Milan, Beijing, Tokyo, Dakar and Los Angeles), the event’s co-founder and president, Lucien Boyer, stressed that “multilateral action is needed” to make sure sport is more inclusive, resilient and sustainable when we come out the other side.

The first edition of the conference tackled issues like climate change, urbanisation, engaging young children in sport, and leveraging science and innovation. From that perspective the content was extremely progressive for a sports conference.

But Boyer insists that in the current situation, Global Sports Week needs to have the ambition of going further and “shaping this new era in sport and society.”

More widely, sport as an industry needs to adopt the same mindset and “unlock its collective imagination”. There were so many fundamental issues in sport that needed to be changed even before Covid struck. Now is the ideal opportunity to right those wrongs.

Earlier this month, the World Economic Forum established its ‘Great Reset’ platform, in which it calls for organisations across industries and the globe to find solutions to the “inconsistencies, inadequacies and contradictions” that have been drastically exposed by the coronavirus pandemic, and will likely be exposed further by climate change and other seismic issues that await us.

“Our challenges are greater, our fragilities exposed, our system needs a reset.”

The above statement, crafted by the World Economic Forum, applies to sport as much as any other industry. Indeed, sport was one of the first sectors to be affected by coronavirus and is likely going to be one of the last to fully recover.

Throughout history, sport has been shaped by industrial revolutions. This current revolution, catalysed by Covid, could shape it beyond all recognition.

But that doesn’t have to be a bad thing. The World Economic Forum stresses that tragedy doesn’t have to be the legacy of this pandemic – indeed it’s a “rare but narrow window of opportunity to reflect, reimagine and reset our world to create a healthier, more equitable, and more prosperous future.”

There are three major components to The Great Reset. The first is that governments implement “long-overdue reforms” to “promote equitable outcomes”, such as wealth taxes and withdrawal of fossil fuel subsidies.

The second is the investment in shared goals, such as equality and sustainability. Funding, such as the European Commission’s €750bn recovery fund, should not be used to “fill the cracks in the old system” but “create a new one that is resilient, equitable and sustainable.”

Thirdly, innovations should be harnessed to address health and social challenges.

These three pillars can easily be adapted to guide us in rebuilding the sports industry.

The review identified specific areas that need to be addressed. For instance, in the area of transparency, international federations received the lowest mean score for reporting allowances and financial benefits for elected officials and senior executives. The most pressing integrity issue was the general lack of gender balance on boards. Having no term limits for officials was highlighted as the biggest concern in terms of democracy, while legacy programmes is the area of development most neglected.

One caveat has to be made, however. ASOIF found a distinct correlation between the international federations that scored highly when it came to governance issues and the amount of resources (financial or human) that they have at their disposal.

That segues nicely into the second component of The Great Reset: where investment in sport must be focused henceforth.

Obviously, the current situation has raised doubts about whether a number of sports organisations can stay afloat, let alone invest and thrive. A number of sport’s leading organisations, such as the International Olympic Committee and UEFA, have provided solidarity payments to international federations and national member federations respectively. Much of that money, of course, will be used to plug holes in the budget and cover running costs.

But to build sport back better, forward-thinking organisations would be wise to use the resources they have to build stronger foundations.

In the words of ASOIF, “sports need to be well-governed to give themselves a better chance of thriving” and, although long-term strategies may be at the very bottom of the priority list for many currently, investment in education programmes, legacy projects, sustainability strategies, athlete wellbeing initiatives, and workforce development would make them less vulnerable if and when crisis strikes again.

If we take climate change as an example of one of these potential crises, a report published by renowned sports journalist, David Goldblatt, and the Rapid Transition Alliance this week painted a sombre picture for the whole industry.

In England, 23 of the 92 Football League clubs face partial or total flooding by 2050. One in three British Open golf courses will be damaged by rising sea levels. From cricket to winter sport, everything will be impacted in one way or another.

Sport is a significant contributor to the climate crisis, says the report, which claims that the industry’s carbon footprint is equivalent to that of Tunisia or Angola. Not only does sport have to invest in climate mitigation strategies to protect itself from the associated risks, it has to put resources forward to make sure its own impact on climate change is as small as possible.

This requires an investment in sustainable innovation, such as renewable energy, and low-carbon transportation for players, employees and fans. It also requires new thinking and a total detachment from the status quo.

The Sustainable Sport Research Collective – established by sport and sustainability professionals Aileen McManamon, Monica Rowand, Kristen Fulmer and Dr. Madeleine Orr – is advocating for the integration of environmental sustainability into sport, specifically venues, when things start to open up again. Its initial focus is gameday logistics, back of house opportunities, and new communication and partnership opportunities.

Those within the industry with the ambition to drive this kind of transformative change could also do worse than reflect on and adopt the ‘business benchmarks’ outlined in the UN Global Compact’s latest piece of literature, ‘Uniting business in the decade of action’:

– Gender balance at all levels of management

– 100% of employees earning a living wage

– Science-based emissions reduction targets in line with the 1.5°c pathway

There’s no question that sport was required to move towards targets like this, even before th Covid-19 outbreak. The UN Global Compact principles and the Sustainable Development Goals are quickly becoming priorities for major partners of sport, as well as a large proportion of fans and athletes.

To what extent sport changes will be the interesting thing to observe. Will clubs, leagues and federations opt for the bare minimum, or really adopt the spirit of The Great Reset and move towards a model totally unrecognisable from the one we’re used to?