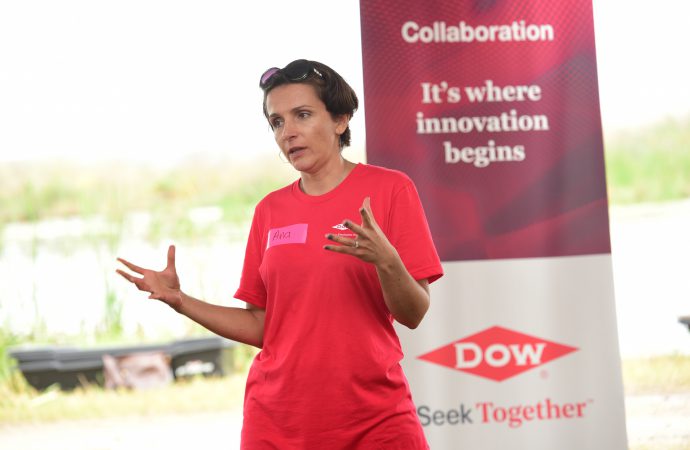 Fledgeling sports events may not have sustainability at the top of their priority list. Launching an event from a standing start in an extremely competitive world is a gargantuan task, and making provisions for environmental and social impact may seem like a complicated and unwanted distraction.

In this scenario, sustainability policy can be limited in scope and uncoordinated at best, nonexistent at worst. And working without existing data from previous events can add another layer of complexity when trying to understand and manage its footprint.

Last year, the LPGA established its latest competition, the Dow Great Lakes Bay Invitational, a team event taking place annually in July in the title sponsor’s home state of Michigan. Facing many of the challenges outlined above, Dow decided to take affirmative action and map out a five-year sustainability strategy for the event and allocate a concrete budget to move that strategy to action.

“When you talk about sustainability, I think it’s harder to have success in the first year,” Anastasia Behr, technology and sustainability leader at Dow, tells The Sustainability Report. “I want to give credit to those who were pitching the event and to our senior leadership team for funding it. This is the first time I’ve seen an actual budget line item that says ‘sustainability’ from the very first day of the conversation.”

The first step, adds Behr, was to develop an understanding of things that the event could directly influence and, conversely, what was out of their control. From that, the organisers chiseled out three “spheres of influence”: event operations, community impact, and what could be done alongside the LPGA.

Below these overarching spheres are six pillars designed to focus the team’s efforts on specific areas of sustainability. These included nature protection and enhancement, procurement, resource management, access and equity, communication, and legacy.

“The pillars are still at a relatively high level,” Behr explains. “The specific tactics used each year in order to achieve our goals are more flexible and can be adjusted depending on how previous results turn out, without necessarily dramatically changing the strategy.”

Working with the GEO Foundation – an organisation advocating for sustainability and conservation through golf – the Dow Great Lakes Bay Invitational team came to the conclusion the first 12 months of the five-year strategy should primarily focus on gathering data to paint a picture of the event’s negative impact.

Behr calls this the “foundation-setting year” to set up baselines by which future events can be measured against and compared. The rationale for this is partially driven by economics. Taking the time to identify the key areas in which the event can have the greatest impact saves time trying to cover all bases right from the off and, as a result, stops the budget being spent on low impact initiatives.

“We have never had an event like this here, so understanding the footprint was a key step,” says Behr. “We had no idea what issues we were going to run into. We learned a lot after our first year though, and measurements taken will inform our decisions from now on.”

Analysis of the first event showed that food, for example, contributed to a large chunk of the event’s negative impact, so that will be a focus in the coming years.

But impact measurement wasn’t the sole focus of the first event. Behr wanted the event to achieve something of note right away and, as a result, secure GEO Certification – a sustainability standard developed specifically for golf courses.

A group of volunteers (dubbed the ‘green team’) was assembled to help sort waste and support spectators with managing their own garbage. A back-of-house team contributed to that particular project, going through and sorting all of the waste following the event, achieving an overall 68% diversion from landfill rate. In addition, more than 1,000 pounds of unused prepared food was donated to a nonprofit, Food Bank of Eastern Michigan.

Dow produced a sustainable procurement code that was sent out to all suppliers at the start of the process. As a result, the event managed to source compostable plates, bowls and cutlery, staff uniforms manufactured from recycled materials, and reusable signage.

“Our goal is to leave a positive legacy, and one way to achieve this is when you get suppliers in any category and you bring them to the forefront of sustainability,” says Behr. “That’s the legacy. That’s why the procurement codes went out with specific requests to send the message through your supply chain that ‘business as usual’ will not work.”

Environmental efforts were complemented by a handful of social initiatives. In particular, a focus on access – with the integration of elevators, scooters and accessible toilets – made the event friendly for people with physical disabilities.

The public had free access to the action on the Monday and Tuesday, which contributed to a bumper crowd of more than 6,000 spectators. More than 5,000 students were given the opportunity to attend companion workshops, and the tournament facilitated a number of philanthropic endeavours, with $500,000 donated to 59 charities.

Through these policies, guided by the overarching strategy, the Dow Great Lakes Bay Invitational garnered 45 out of a possible 55 points across six categories to achieve GEO certification, becoming the first golf tournament to receive the recognition during its first year of operation. Significantly, the competition is the first LPGA affiliated tournament to be fully certified.

Not bad considering the primary goal of year one was to gather statistical data and create benchmarks. Indeed, a high benchmark has already been achieved and has set the tone for the next four years.

“Our first year was focused on working out what we were doing badly, and so the next two years are focused on trying to rectify this and turn the tables to start having a positive effect,” Behr explains. “Then the last two years of the events will mimic Dow’s 2025 sustainability goals (see more here).

“Our vision from day one was to position the event and sustainability initiative as a blueprint for others to leave a longer lasting legacy, not only locally, but also in the LPGA circuit, if not further afield.”