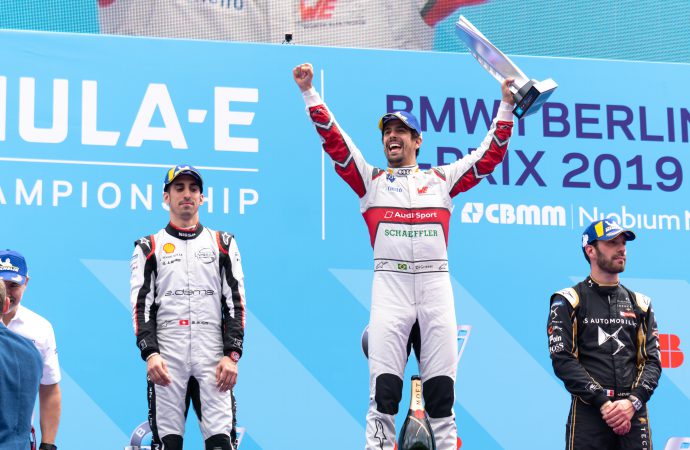 It was almost a case of history repeating itself as BMW i Andretti Motorsport clinched a win during the first Formula E weekend of season six in the Saudi capital of Riyadh, just as the team did last year to kick off the fifth edition of the electric car racing series.

But, in keeping with Formula E’s growing reputation for unpredictability, Maximilian Guenther – who achieved second behind teammate Alexander Sim to give BMW a one-two finish – was stripped of his podium for overtaking behind a safety car, handing the place to Mercedes-Benz EQ driver, Stoffel Vandoorne.

It is, in part, this penchant for serving up the unexpected that has seen the motorsport grow in popularity since its inception in 2014. The first eight races of last season threw up eight different winners, while both the drivers’ and teams’ championships were in the balance right up until the finale in New York in July.

According to figures produced by Formula E, season five drew a cumulative audience of 411 million, up 24% on season four. That’s still some way behind the 1.59 billion achieved by Formula One, the FIA’s flagship competition, in 2018, but the profile of Formula E’s audience and its growing commercial strength is cause for optimism.

When Formula E was established by current chairman and former chief executive Alejandro Agag, it was positioned as a motorsport for the young who, in general, most actively engage with issues like climate change and sustainability. Almost three-quarters (72%) of Formula E’s followers on social channels are under 35 years-old.

Data released in 2018 further demonstrated Formula E’s sway with young fans: half of the engagement on Formula E’s Facebook page comes from individuals either in the 13-17 age category, or 18-24. During season four, there was a 347% rise in the number of 13-17 year-old fans engaging with the sport’s online content.

The sporting spectacle, of course, has played a central role in increasing those spectator numbers. But there’s no doubt that the competition’s alignment with sustainable development – particularly in urban areas – and the growing electric vehicle market has contributed significantly to its surging popularity.

Formula E’s growth has been sufficient enough to warrant a response from its closest competitor and motorsport behemoth, Formula One, which has recently unveiled its first-ever sustainability strategy and pledged to become carbon neutral by 2030.

But while Formula E has a long way to go to achieve the worldwide appeal of Formula One from a sporting context, the latter is nowhere near the former when it comes to sustainability credentials. And, going into season six, Formula E’s ambition in this regard is only getting stronger.

However, for Formula E’s senior sustainability consultant, Julia Pallé, season six will be an opportunity for evolution rather than revolution.

“Last season was a very important one for Formula E because there’s been a huge amount of work to reposition the brand regarding sustainability,” she tells The Sustainability Report. “The championship is really demonstrating its purpose, which is really centred around electrification.”

World Health Organization statistics reveal that approximately four million deaths annually are being caused by poor outdoor air quality. Road transport is responsible for up to 30% of air pollution in European cities, and as much as 50% in OECD (Organisation for Economic Cooperation and Development) countries, a list of nations that includes Chile, Mexico, Italy, France, South Korea, Germany, the US and the UK (all host locations for the sixth series of the competition).

“Air pollution is a huge problem in cities and we have a game-changing role to play here,” adds Julia Pallé. “Air pollution and climate change are interlinked, so if we reduce air pollution we would also improve the levels of greenhouse gas warming.”

There are two parts to that game-changing role: “inspire people” to make more sustainable choices when it comes to transportation, such as investing in an electric vehicle, and leverage the sport’s technological and engineering nouse to develop the solutions to make electric mobility a more attractive proposition to consumers.

Formula E’s effect on the first is hard to quantify. While there’s no specific data linking the growing popularity of Formula E and electric car sales, Pallé explains that research done by the company’s insight team shows that fans are “increasingly more interested in sustainability while watching or attending our races” and are likely to bring that awareness back to their everyday lives.

A Cox Automotive study found that in the US, only 10% of electric vehicle buyers are in the 25-34 age bracket because the price was prohibitive. The cost gap, however, is beginning to decrease, making the acquisition of an electric car for today’s Generation Z and Millennials more accessible in the future.

One of the main barriers to purchasing an electric car for all demographics is a concern about the battery and, more precisely, anxiety that the battery will run out of power before it can be recharged. This is an area Formula E can influence through its own research and development capabilities.

The Gen2 car that was launched at the start of season five was built with a new battery capable with nearly double the capacity of the Gen1 battery, enabling cars to complete a race without any mid-race car swaps. Pallé says that innovation like that, which shows that batteries can last for hundreds of miles, should make those consumer anxieties a “worry of the past”.

Indeed, the “next key technology” that the championship is currently trying to tackle is ultra-fast charging – another innovation that would surely improve consumer confidence if rolled out universally.

Promoting electrification to the wider public is one of three key sustainability pillars carved out by Formula E. But more than demonstrating technology through high-powered cars hurtling around a racetrack, the organisation uses its accompanying fan zone to showcase the technology for the 20,000-plus spectators that come to an event.

The dedicated fan zone, known as the Allianz E-Village, is also an area to expose the public to other elements of environmental stewardship and social development that Formula E has made a priority.

Hydration stations were installed at many season five tracks alongside reusable water pouches to save save 200,000 plastic bottles. In addition, Formula E’s growing focus on air quality has become a major point of interaction for fans, who will be introduced to experiential oxygen bars during season six.

“Having clean air is as important as drinking,” Pallé stresses. “People die because they’re breathing unsafe air, so we want to try to push that message out a bit stronger. We will have a moment of amplification around COP25 and try to raise even more awareness by going a step further with our air quality focus.”

During season five of the championship, Formula E contributed to the FIA’s programme to increase gender equality in motorsport, called Girls on Track. The programme was piloted during races in Mexico City and Berlin. Pallé expects a wider rollout during the current series, with at least on programme in each continent promoting motorsport as a viable career for girls and young women.

But it’s Formula E’s first pillar of sustainability – minimising its own negative environmental impact – which will be its most challenging. The competition’s series four sustainability report (series five’s will be available before the end of the year) revealed a carbon footprint of 45,000 tonnes, with freight responsible for 72% of the impact.

Only 10 cities hosted 12 races during that series, compared to 12 cities hosting 14 races in series six.

While Formula One’s annual carbon footprint is much higher (256,551 tonnes), like Formula E, the lion’s share of those emissions come from logistics rather than fuel usage for competing cars.

“The problem at the moment is we are growing in terms of cities being added to the calendar,” Pallé explains. “The last few seasons we’ve had some inconsistencies in how the calendar was being established. It’s something the management is very aware of. It has a double impact on the environmental and financial side of things.”

To counteract this. Formula E and logistics partner DHL have tried to “optimise” travel routes to reduce carbon emissions as much as possible. But in the future Pallé is keen to implement science-based targets – the first time that these types of targets have been adapted to an events company.

Setting science-based targets means, essentially, moving your company’s greenhouse gas emissions targets in line with climate science – in this case, the Paris 2015 Climate Agreement, which has set the objective of limiting global warming well below the 2°c needed to avoid climate catastrophe.

“I’m really interested in science-based targets because I believe that it’s going to become something that’s mandatory for all businesses,” Pallé says. “We all know there is a climate emergency and we need to act, but the problem is we don’t know exactly the size of the action we need to take.

“We’ve not yet implemented them, but we’re looking at the system and how to apply it to events. It’s something which is fairly new and normally for a big corporate with industrial focus.”

Backed by a new chief executive Jamie Reigle and having turned its first profit since launching in 2014, Formula E is well positioned for the next stage of growth as a sporting spectacle. If the competition has a genuine impact on city air quality, introduces science-based targets and continues to push innovation in the field of electric mobility, its status as one of sport’s most sustainable entities should also be enhanced further.