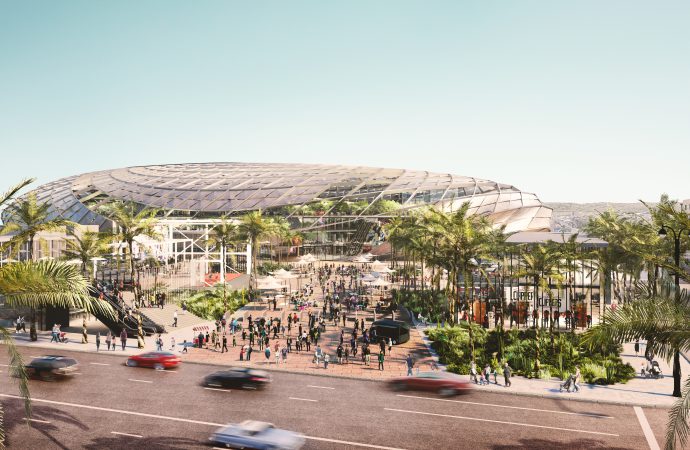 A new LEED Gold-certified entertainment district – that will achieve “net zero greenhouse gas emissions – is being planned by NBA franchise, the LA Clippers.

The privately-financed development has been scheduled for 2024, when the team’s lease at the Staples Center expires, and has “environmental sustainability at the core of its design.”

According to AECOM, the architect behind the design, the project will be built “using state-of-the-art environmentally friendly technology” and “sustainable construction practices”. The campus will be constructed by developer Wilson Meany.

To achieve its target of net zero greenhouse gas emissions the facility will generate a portion of its energy via solar panels via a 700-kilowatt photovoltaic system (which has the capacity to generate more than one million kilowatt hours per year).

The team has also pledged to offset all unavoidable emissions generated by the new venue via carbon credits.

To achieve LEED Gold certification, the Clippers will have to gain 60-79 points, out of a possible 100, related to requirements such as water efficiency, energy efficiency, waste management, human wellbeing and site management.

An additional Environmental Impact Report will be conducted – in line with California’s Environmental Quality Act – to assess the impacts and benefits of the arena and surrounding complex.

The process, says the Clippers’ leadership team, will be “transparent and include extensive community input”.

Bill Hanway, AECOM’s global sports leader, will head up the project. Hanway is also leading the design project for the LA 2028 Olympics, which is focusing on revamping existing facilities instead of building new venues, in line with the sustainability element of the International Olympic Committee’s Agenda 2020 strategy.

As well as the environmental sustainability element of the plan, the Clippers leadership team has also put forward its social and economic benefits.

With regards to the former, the site – which is being built on a vacant piece of land on West Century Boulevard – will include facilities, such as basketball courts, dedicated for wider community.

Around 10,000 construction jobs, and 1,500 permanent jobs, will be created as a consequence of the project. Around 30% of construction jobs and 35% of permanent jobs will be filled by local people. It’s also estimated that the complex will bring in $268m to Inglewood every year and $190m in tax revenue from 2020-2024.