The sustainable ‘stadium of the future’: An ambitious and feasible vision – if we continue to innovate 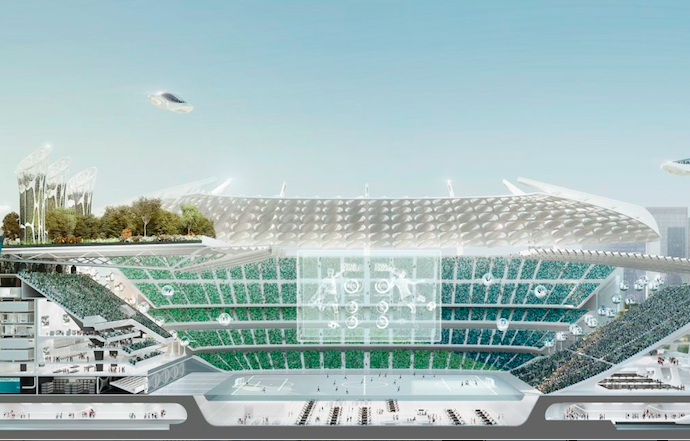 While innovation in sport is currently skewing more towards fan engagement, there’s a huge opportunity for emerging technology to accelerate the sustainable sport movement

Around 18 months ago, sports architecture firm Populous (the design team behind Tottenham Hotspur’s impressive new stadium) and National Geographic put their heads together to imagine what the stadium of the future would look like.

Check it out if you haven’t yet seen it. Although it may be fantastical to expect the majority of sports venues (or even a small proportion of them) to incorporate every single element devised, the concept offers a staggering glimpse of what could be possible if and when sport totally embraces cutting-edge innovation.

Holograms, with the latest scores and stats, hovering over the field via augmented reality. Electromagnetic hospitality pods that move around the stadium, giving spectators views from all over the pitch. Viewing platforms overlooking the stadium, allowing fans to watch from an elevated tailgate party. A transparent field that can be watched from underneath.

Even in the context of the drastic alterations currently being made by major sports venues to boost fan engagement (swimming pools, microbreweries and tunnel lounges, anyone?), these additions indicate a huge step up in ambition.

But aside from fan engagement, there is another area in which Populous and National Geographic believe that the stadium of the future can take the lead in innovation: you guessed it – sustainability.

Imagine, for a second, an 80,000-capacity stadium that has a retractable roof holding trees, wind turbines and a vegetable garden. A rainwater collection facility (a feature that, admittedly, has already been incorporated by a handful of forward-thinking venues) and a hyperloop station under the stadium encouraging fans to take public transit.

To maximise the stadium’s use, the proposed playing surface would seamlessly change texture (from grass to artificial turf to wood) so that a number of professional teams from different sports could use the same venue. The building includes residential units and public athletics facilities to keep it in use for 365 days of the year.

And it will all be powered by photovoltaic panels integrated into discs in the stadium roof and the aforementioned wind turbines.

It’s a wonderful and ambitious vision. The challenge now is to find the innovators able to help sport make this vision a reality.

It was encouraging to read that when newly-crowned English Premier League champion Manchester City hosted a start-up challenge a few weeks ago, ‘sustainable stadium’ was one of the main topics, with a selected number of start-ups tasked with finding ways to reduce waste, improve energy efficiency and tackle the carbon footprint of large venues. SEaB Energy – a UK-based company that turns waste into energy via anaerobic digestion units – was one of the finalists taking part in the contest.

A handful of world-renowned venues have shunned the status quo to reinvent their stadiums as hotbeds of innovation. Ajax’s Johan Cruiyff Arena has famously transformed second life Nissan car batteries into an efficient energy storage and distribution system. Energy that is not required for a match day is sold back to the grid. Melbourne Cricket Ground diverts tonnes of food and garden waste away from landfill by turning it into soil additive for the surrounding Yarra Park.

Solar panels and wind turbines have been integrated by several venues in the US to harness the natural elements to generate renewable energy. But to achieve the vision laid out by Populous and National Geographic, companies – from start-ups to well-established entities – will need to crank it up a notch in terms of ambition.

Currently, it feels like innovation in sport is skewed heavily towards fan engagement. That’s natural. Fans are the lifeblood of any sport. And in an era when an increasing number of activities are competing for their time and attention, sports clubs and bodies have to do whatever they can to keep bums on seats and the match day experience relevant.

I was honoured to be invited to be part of the judging panel for one of the start-up competitions during The Spot sport and innovation conference, organised by ThinkSport in Lausanne in May. Every single one of the 12 start-ups pitching were extremely impressive, with convincing ideas and compelling business models to back up their enthusiasm. But only one of the start-ups in the bunch – Project B64, a company that takes old petrol go-karts and transforms them into electric ones – were involved in sustainable innovation in its purest sense.

The number of innovation hubs specific to solving problems within sport is blowing up. Le Tremplin in Paris, leAD Sports Accelerator in Berlin and Colosseum Sports in Tel Aviv are among the largest. But there are few fledgling companies focused on making sport a more sustainable sector currently being incubated.

FC Barcelona, one of the most recognisable brands in sport, has its own innovation hub that brings together scientists, entrepreneurs, students, athletes, investors and academics to find innovative solutions in seven main areas. Three of those topics are health and wellness, smart facilities, and social impact.

The FC Barca Innovation Hub has recently investigated the feasibility of integrating a kinetic energy system into the Camp Nou pitch and club training facilities to source electrical power from the players’ movement while playing football – a concept devised by British engineer Laurence Kemball-Cook and tested in Brazil’s Morro da Mineira community football facility since 2014.

Formula One 2016 champion Nico Rosberg has also established the Greentech Festival, bringing sustainable technology companies, major brands and Formula E racing together over a weekend. Since its inception, Formula E has probably done more than most to bring the worlds of sustainable innovation and sport together. Mainstreaming electric mobility is of course its number one priority, but the racing series has additionally worked with companies like Umicore and CSM Live to recycle lithium-ion batteries and develop sustainable non-PVC signage for races respectively.

There’s a huge opportunity to bring these worlds even more closely together. Supply will dictate demand; and while fan engagement will probably continue to be the primary driver of innovation, sport’s increasing focus on sustainability (the impact of climate change, energy and cost efficiency, etc) should see companies of all sectors and sizes attempt to help the industry address challenges in this growing area of concern.

Populous’ vision of the stadium of the future brought together the needs of the fans and the needs of the environment in a seamless fashion. More efficient public transit, greener spaces and the stadium as a community hub ticks both boxes. It’s a future vision that I think everyone in sport can buy into. Now, let’s make it happen.

What can sport do to effectively foster innovation in the area of sustainability? Let us know in the comments below.