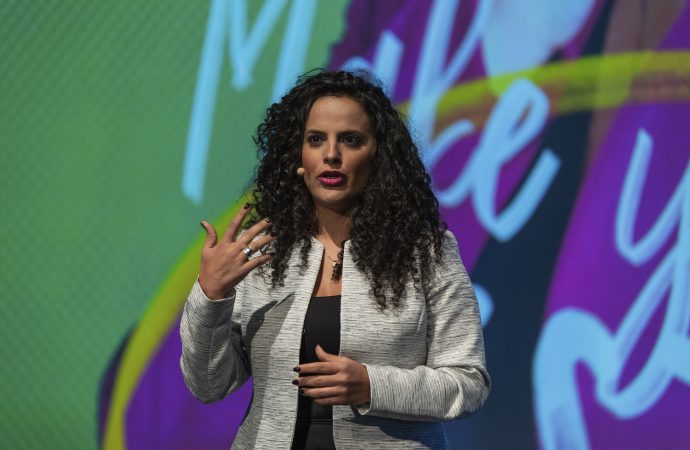 After growing up in occupied Palestine and co-founding its first-ever women’s football team, FIFA’s corporate communications manager is determined to make the beautiful game a fairer and more diverse place

The record-breaking numbers recorded in the lead-up to the 2019 FIFA Women’s World Cup – over 720,000 tickets sold as of mid-April, with the opening match, two semi-finals and the final all selling out within 48 hours – point to the ever-growing popularity of the women’s game, with this summer’s tournament in France also expected to reach new heights in global broadcast figures.

For all the excitement surrounding FIFA’s flagship women’s football championship, there remains an acknowledgement within the sport’s world governing body that more must be done to close the gap to the men’s game.

As a corporate communications manager at FIFA, Honey Thaljieh is an important presence in the organisation’s efforts to promote gender equality and female empowerment in football, while she is also heavily involved in its peace initiatives.

Since taking up the role, Thaljieh has established the FIFA Annual Conference for Equality and Inclusion and has overseen a number of social development projects at international youth tournaments. But how does the Palestinian envisage FIFA expanding its commitments in these areas in the years to come?

Growing up in Bethlehem in the West Bank, Thaljieh was a pioneer in the development of the women’s game in Palestine, co-founding its women’s national team and going on to captain the side.

A succession of injuries brought an end to her playing career but not her ambitions of making a difference in the world of sport. After becoming the first woman from the Middle East to earn a FIFA Master’s degree in Management, Law and Humanities of Sport, she joined the organisation in 2012, first as a project management intern in the Women’s Football Development department and subsequently as a corporate communications manager.

Besides her responsibilities with FIFA, Thaljieh remains a key figure in the growth of football in her homeland as a member of the Palestinian Football Association’s Women’s Football Committee and through her work on the Supreme Council of Youth and Sports.

“Palestine is a great example among the Arab Member Associations and the Arab world, because there you can see that the role of women has progressed a lot,” Thaljieh tells The Sustainability Report during the UEFA #EqualGame Conference, a two-day anti-discrimination and diversity summit held at Wembley Stadium in London.

“When I helped establish the women’s national football team in 2003, there were zero women involved in football. But when we started the women’s football revolution, it was phenomenal. For example, I have been to villages where women and girls were not even allowed to walk in the streets. But when we brought football there, they started a football team, and now two of the girls from that village play for the national team.

“The president of the Palestinian Football Association is a big fan of empowering women and giving them a role and a voice in football, and the vice president is now a woman.”

In addition to her address at the UEFA #EqualGame Conference, entitled ‘What it means to be a woman in football’, Thaljieh regularly speaks at summits all over the world, including a TEDx talk in Zurich and appearances at events run by the United Nations, UNESCO and UNICEF. She is the Peace and Sport organisation’s ‘Champion for Peace’, and acts as an ambassador for a number of social sports bodies such as Save the Dream and Football for Peace.

Thaljieh has worked hard to raise the profile of women’s football and draw attention to important social issues in her role as FIFA’s corporate communications manager. At the 2016 FIFA U-17 Women’s World Cup in Jordan, she was part of a campaign to involve children and young people from the Al Zaatari refugee camp, donating shirts, balls and bags and giving the refugees the opportunity to have their photographs taken with the competition trophy.

During the same year at the FIFA U-20 Women’s World Cup in Papua New Guinea, Thaljieh helped organise the #EndViolence social media campaign to highlight the country’s problems with violence against women and children.

Significant achievements though they are, the Palestinian feels that her work at FIFA is far from over. Through the appointment in 2016 of Fatma Samoura as the organisation’s first female secretary general, however, Thaljieh feels her employers are on the right path in creating a more equal and diverse footballing community.

“Until 2012 we had no women sitting on the FIFA Council. Now we have seven, and it’s a step forward, but of course, it’s not enough. We need more,” explains Thaljieh.

“We have the first female secretary general of FIFA who is a black African from Senegal. That’s a great achievement. She has opened the doors for so many women to dream that one day, they can be there, and they can influence change in so many ways.

“It’s not only women we need, but also competent women. It’s important to have competent, confident and courageous women to make the changes.

“We should push Member Associations to have more women in leadership positions, like presidents and secretaries general. Even today, we only have 19 among 211, and that’s the work we’re trying to do through the FIFA Women’s World Cup and the Women’s Football Convention that we will host before the tournament kicks off. Through such initiatives, we hope to increase the number of women in decision-making positions.”

What more should be done by FIFA and the wider footballing community to bring about gender equality in the sport? Let us know what you think in the comments below.