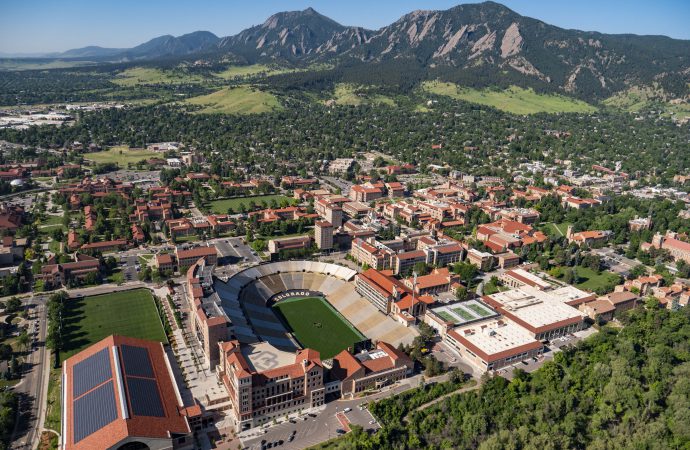 Collegiate sport sustainability pioneer, University of Colorado Boulder, “thrilled to be an early adopter” of the Sport for Climate Action Framework

The University of Colorado Boulder has become the first educational institution to adopt the UNFCCC’s Sport for Climate Action Framework.

In 2016, the university’s athletics facilities were upgraded to achieve LEED Platinum certification (the highest possible level awarded by the US Green Building Council), thanks to its “net-zero-energy” indoor practice facility, which has an 850-kilowatt rooftop solar panel.

Its basketball and volleyball practice facility was also built to LEED Platinum standards. CU became the first major college in the US to implement a zero waste programme in all gameday venues, while the athletics department has made strides in reducing the amount of pesticides used on turf fields.

As an institution, the University of Colorado Boulder became one of 12 founding members of the University Climate Change Coalition in 2018, which has “committed to mobilise members’ collective resources and expertise” to accelerate climate action in partnerships with businesses, cities and states.

The school’s earth and atmospheric sciences are also ranked No. 1 in global university rankings.

Philip DiStefano, the chancellor of the University of Colorado Boulder, said committing to the Sport for Climate Action Framework was “just the latest example of the great work going on at our university to positively impact humanity through leadership and innovation in sustainability.”

“Athletics provides an excellent platform for raising the profile of these efforts and we’re proud to be at the forefront of this new framework,” he added.

The university is the latest organisation to commit to the framework, which now has signatories in the form of leagues (the NBA), venues (AEG), events (Tokyo 2020 and Paris 2024 Olympics), major professional teams (New York Yankees, LA Kings) and world governing bodies (IOC and FIFA).

“We’re thrilled to be an early adopter of the UN’s Sport for Climate Action Framework,” said CU athletic director Rick George. “This is consistent with the leadership and excellence expected by CU Boulder students, faculty, staff, alumni and fans as we confront the critical issue of climate change.”