Omar Mitchell, NHL: “We want to ensure that hockey is around for future generations” 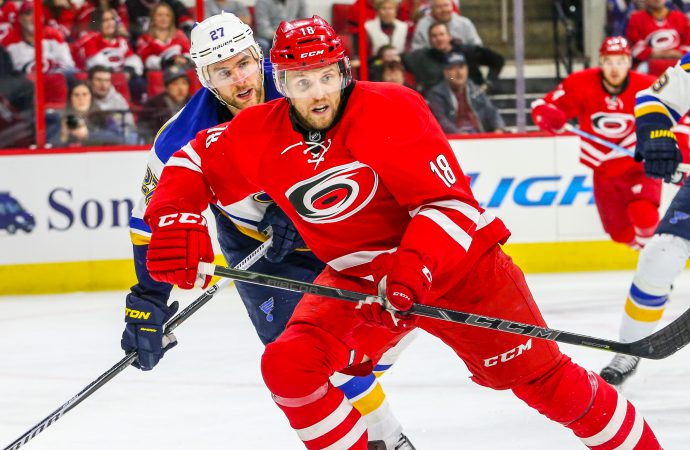 The three key concepts driving the five-year goals set by NHL’s Green division. Innovation and transformation, in particular, are often driven by necessity more than anything. A need to change in the face of existential threat. When the status quo is no longer fit for purpose.

This need for change speaks to professional ice hockey on two levels. The first is a bigger-picture examination of the rapidly changing climate and what it means for the health of the game. According to Wilfrid Laurier University, the average length of the outdoor skating season in eastern Canada may reduce by one-third over the coming decades and by 20% in western Canada.

Frozen lakes are the training grounds for tomorrow’s professional players. And because of climate change those lakes are remaining frozen for a shorter period as the years roll by. It’s the reason hall-of-famers Mike Richter and Viacheslav Fetisov are among sport’s loudest voices desperately trying to raise awareness of the damage being caused by global warming.

The second, more practical, issue driving change in the hockey community is totally regulatory: that the production of hydrochlorofluorocarbons (HCFC) chemicals used to keep rinks cool – otherwise known as refrigerants – is being phased out in 2020 under the ‘Montreal Protocol on Substances that Deplete the Ozone Layer’.

For hockey, the protocol is part blessing, part curse. On the one hand, a large piece of global legislation like that leaves nowhere to hide; owners and operators of rinks have no choice by to find refrigerants that are better for the environment and, by definition, better for the future of the game.

But on the other hand, a change of that scale can be hugely disruptive to an industry like ice hockey, where alternatives have to be sought out, equipment may have to be altered at significant cost and the people in charge need to re-educate themselves.

And while a number of NHL franchises – including Detroit Red Wings, Edmonton Oilers, Toronto Maple Leafs and Vegas Golden Knights – have installed ammonia refrigeration systems, which have “zero ozone depleting and global warming potential”, one of the league’s priorities is to help both professional teams and community rinks switch to environmentally-friendly, cost-effective alternatives to HCFC before the phase-out leaves them vulnerable.

Omar Mitchell, the NHL’s vice-president of sustainable infrastructure & growth initiatives, calls this element of the organisation’s sustainability strategy “NHL Green 2.0”. Out of approximately 5,000 community rinks in North America, NHL estimates that between 30-50% of facilities are yet to switch refrigerants. So a large-scale process of education, support and dialogue is one of Mitchell’s foremost responsibilities.

“The phase-out of HCFC in 2020 is going to be seismic,” he tells The Sustainability Report. “Across North America, but especially in the US, a lot of rinks use a particular HCFC refrigerant known as R22 to create their ice sheet.”

To develop a sustainable and “cost-effective” refrigerant option for community rinks, NHL has partnered with chemical company Chemours (formerly of DuPont). The league has hosted webinars to educate venue owners about procurement strategies when it comes to finding an alternative to HCFC, and in Minnesota, which has “geographically, the highest proportion of rinks in the US”, the NHL hosted two industry events for the purposes of education.

And now Mitchell is preparing to hit the road to spread the message further afield.

“I’m planning to go to almost every single major local or state rink association spring conference to educate them on what the NHL is doing,” he explains. “We want to ensure that hockey is around for future generations, so we’ll tell them how latest innovations like refrigerants apply to that.

“And then I’m going to big conferences like the North American Rink Conference and Expo, which is the largest kind of associational gathering of these stakeholders to really drive that message home.”

A website and digital banners have also been launched by NHL, which link to case studies and “success stories” about rinks adopting alternative refrigerant technology.

But there are a few significant challenges. Firstly, around 80% of the rinks across North America are more than 20 years old, meaning that many have ice refrigeration systems that were “built in the 1970s and 80s”. Major upgrades and retrofits are expensive. However, retrofitting an existing system is far less costly than integrating a brand new system. And when combined with the installation of LED lights, building automation systems and smart dehumidification systems, the NHL can sell the long-term cost savings that will be made from energy efficiency.

The second biggest challenge is educating the relevant stakeholders about the marketplace and HCFC alternatives, says Mitchell. As well as the Opteon refrigerant developed by Chemours, rinks can also opt for “natural refrigerants” like ammonia, which has low global warming potential but can be expensive. However, there are other things to consider.

“Rinks should be thinking about cost of ownership over a lifetime, including cost of maintenance because that’s all part of operational sustainability,” Mitchell says. “They should definitely think about environmental sustainability from the global warming potential perspective. But achieving a 50-to-60% reduction in global warming potential is significant – it may not be zero, but they have to factor in all the other aspects.”

He continues: “We’re not saying that this solution or ammonia is good, bad or indifferent. We’re trying to educate the marketplace and get them to choose the right solution.”

The professional league, he adds, should be seen as the “aggregator of best practice”, with NHL expecting franchises lead the way on the sustainability front and provide an inspirational reference point for community venues.

LA Kings and its Staple Center venue (above), for example, are currently helping NHL to track data following the installation of a new energy-efficient dehumidification system installed in the facility to “see how it performs” and to judge if that type of sustainable innovation can be effective for community rinks as well as professional arenas.

Part of the league’s own innovation programme is finding the renewable energy sources and technologies to reduce its own carbon emissions. Over the two-year period from 2014 to 2016, the league reduced its carbon footprint from 189,503 tonnes to 182,355 tonnes, with carbon offsetting projects used to balance out unavoidable emissions.

“NHL Green 2.0 goes beyond just sharing awareness around environmental concerns for hockey,” says Mitchell. “What we’re trying to do is show that our environmental sustainability initiative ultimately impacts the growth of the our game. Through community rinks, through innovations, through adoption of best products and services.

“And I think a lot of people forget about the social sustainability component. Once the operating costs of rinks go down, hopefully the price of time on the ice does too so that we get more people into our sport. Particularly from disadvantaged backgrounds.”

To accelerate this commitment to access for all, NHL established a street hockey rink in Boston last November named in honour of the NHL’s first black player, Willie O’Ree. Another temporary street rink was built in San Jose for the 2019 All-Star Game to create spaces that are “diverse, accessible, inclusive and safe”.

“They are places where we believe that kids can learn life values through hockey,” Mitchell explains. “I bring all of this up because our NHL Green efforts are tied to our initiatives to grow the game and their tied to our ultimate goal: to really positively impact the communities where we play.”

What other sports leagues or organisations are helping grassroots clubs and venues become more sustainable in a practical way? Let us know in the comments below.