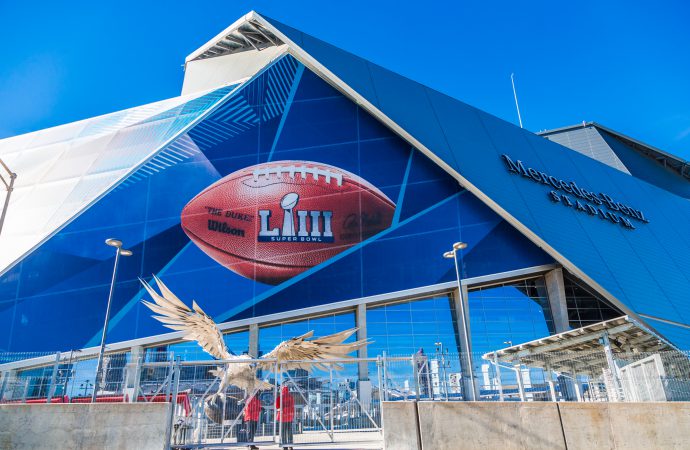 Twenty-five years after establishing its first sustainability project in Atlanta for Super Bowl XXVIII, the NFL is back in the city and delivering its most ambitious programme yet

Atlanta is a special place for Jack Groh. It was here he says, during Super Bowl XXVIII in 1994, that the sport and sustainability movement began in the US with a “small recycling project” he helped develop for the Georgia Dome.

Six years later, the director of the NFL’s Environmental Programme (NFL Green), was back in the city for Super Bowl XXXIV, where he established the first Super Kids-Super Sharing project, in which school children donated unwanted but serviceable items, such as sports equipment and stationery, to low-income schools in the local area.

In 2000, three schools participated with a “couple of hundred” items donated. A few weeks ago, ahead of this weekend’s Super Bowl in Atlanta’s impressive new Mercedes-Benz Stadium, 120 schools participated and donated 40,000 books, pieces of sports equipment, games and school supplies for schools, community centres and youth centres in need.

Although Super Kids is just one of a number of projects developed around the Super Bowl, those numbers perfectly demonstrate the extent to which the NFL’s sustainability arm has grown over the past 25 years. And this year Groh is taking that ambition up another notch by delivering a pilot project that aims to get fans engaged in recycling by making it part of the game day experience.

“Every time we come to Atlanta we have a sea change,” Groh tells The Sustainability Report. “We want to get the message to folks, but we have to turn that into something that enhances their experience so much that they go home and talk about it.”

Around two dozen members of the NFL Green team will roam around the stadium on game day, distributing Super Bowl-branded hats to those they see recycling. The environment-conscious winners will then have their photographs taken and posted from the NFL’s official social media accounts, where they’ll be portrayed as “recycling champions.”

“When that person comes home from Super Bowl and their friends ask them about the game, they’ll say: ‘The game was great – and I won this hat for recycling a can.’ That’s the message we want to spread. We want to make it such a cool thing that people will want to recycle. I think that’s the way you build sustainability into fan engagement.

“We’re looking at unique ways to engage fans,” he adds. “An awful lot of organisations get athletes to talk about recycling or energy use, or issue big reports or public service announcements telling people what they should be doing. We looked at that with a very jaundiced eye and said that’s not getting the job done. People want to be entertained, not preached to.”

If the pilot goes well, Groh expects the initiative to be built into the Super Bowl LIV sustainability programme ahead of the game in Miami next year. Provisional named ‘Recycle and Win’, the scheme will be branded around the stadium on game day and promoted on social media extensively.

Groh is hoping that Recycle and Win will encourage sponsorship, and has plans to develop a custom-made hat for next year’s Recycle Champions.

But because the Super Bowl is the most important date in the American sporting calendar, Groh knows that the spectators he’s trying to engage are not all necessarily ‘die-hard’ football fans. And that can be even more powerful.

“The audience is likely to include corporate executives, sponsors, VIPs – real decision makers and movers and shakers,” he explains. “These are folks who run convention centres, sports leagues. They own sports teams. They come to the Super Bowl to see how we manage entertainment, ticketing, security, officiating. And they want to learn from us because it doesn’t get bigger or better than this.

“When they saw us recycling, within about five or six years we began to see recycling bins popping up at facilities all across America. These folks go back to their operations people and say they want to emulate what they saw at their own events.”

Groh is talking to The Sustainability Report from an e-waste recycle rally at Atlanta Zoo, in which local people can bring discarded televisions, computers and other electrical items to be recycled responsibly. It’s the third year in a row that the NFL has partnered with a zoo local to the Super Bowl venue (after Houston in 2017 and Minneapolis in 2018) to host the event.

The e-waste rally, Groh explains, is particularly poignant for the zoos as much of the minerals that are used to create electronics like laptops and smartphones are mined in gorilla habitats that are destroyed by the extraction process. The more stuff recovered and recycled, the less raw material that has to be sourced from the ground.

Making much of NFL Green’s projects possible is funding and support from telecommunications company Verizon, which has sponsored its work for six years. Indeed, Groh mentions that a huge part of his annual budget each year come from Verizon, allowing him to expand the scope and ambition of the NFL’s work in this area every year.

“The real key for us is that Verizon is not just using the environment as a marketing tool,” says Groh. “It’s not about green marketing, but what they can do by rolling up their sleeves and doing stuff in communities. That’s what it’s always been for us – what real-world impact we can make.”

One of the “jewels in the crown” of the NFL Green’s programme this year is the creation of a ‘food forest’ in Atlanta in an urban area with limited access to fresh produce – also known as a ‘food desert’. The seven-acre plot will provide free produce, such as vegetables, berries and pecans, for the local community and represents one of 15 urban forestry projects that have come to fruition ahead of Super Bowl LIII.

Other projects under this banner involve urban tree planting, pollinator habitat restoration and the development of community gardens.

The lynchpin of sustainability

Groh, who works alongside his wife Susan (associate director of NFL Green), says he’s less concerned with making things “green” and more interested in making a positive environmental, social and economic difference in the community he serves ahead of each Super Bowl.

That philosophy is perhaps demonstrated best by the aforementioned Super Kids project that Groh describes as “the lynchpin of sustainability for us.”

“To take something that appears to have no value and move it on, or change it, or do something with it to turn it into an item of value is what we aim for,” he says.

Environmentally, Super Kids ticks the box as most of the items that are donated were probably destined for the landfill, while on the economic side of things, those items are freeing up parts of the budget for teachers in the low-income schools that benefit (which is practically non-existent anyway).

“The social element is a little harder to dig down on,” Groh admits, “but when you drill down a bit you can see kids coming from all over the metro-Atlanta area, from different neighbourhoods, religions, races, economic groups. Kids generally hang out with people in their neighbourhoods and, oftentimes, people in your neighbourhood are very much like yourself. Here’s an opportunity for kids to be exposed to other kids who appear very different, but who are all working together towards the same objective.”

Penn State University is so impressed with the scheme that it’s trying to develop a variation of Super Kids – with the help of NFL Green – that can run throughout the year. The organisations are also working together to devise an educational programme that will train people in the field of sustainable event management.

Creating impactful sustainable development projects around the Super Bowl is one thing. But minimising the environmental impact of hosting the event is another thing entirely. Every year, the circus comes to town in a different US city, which requires the use of a lot of different materials.

The NFL, says Groh, has developed a “very aggressive programme” to make sure the majority of those materials are reused, remanufactured and repurposed. To do this, NFL Green spends around a year building up a “material recovery network” alongside local nonprofits to teach local organisations how to make the most of those items to give them another life.

Ahead of Super Bowl LII, hosted last year in Minneapolis, Groh spent 18 months building up such a network before passing that knowledge and those contacts onto the X Games – also occurring in the city a few months later – so that their materials could also be reused and repurposed in a similar fashion.

Around 170,000 pounds of food and beverages were also recovered from last year’s showpiece and donated to soup kitchens, shelters, community groups, churches and food banks. In fact, 91% of all trash generated was diverted away from landfill.

“That’s a tremendous amount of stuff that would have ended up in landfill in past years. Think of all the people that get fed as a result of that and the economic benefit for shelters that would have had to purchase all that food if it hadn’t been donated,” says Groh reflecting on the impact of the projects.

“The whole thing started with a really tiny contract to do this recycling project at the Georgia Dome. Now it’s a part of Super Bowl and has become an integral part of how we manage events,” he adds.

“The culture of the NFL has changed dramatically in 25 years. This is the NFL way of doing things – we don’t throw stuff away, we don’t source styrofoam. Many organisations who are contracted by the league may have done multiple events, but we take them aside and say, ‘we are the NFL, we have a different approach to this kind of stuff.’ We think about sustainability in everything.”

What are other major sporting events doing to broaden awareness around sustainability? Could the Super Bowl’s projects be adapted by other sports organisations in other regions? Let us know in the comments below.