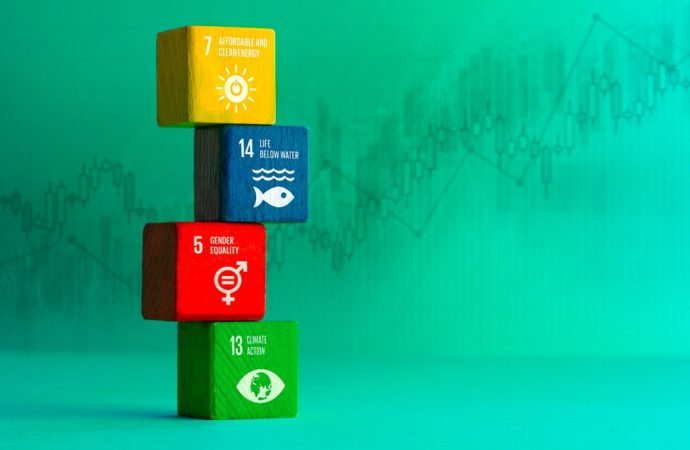 Twelve trillion dollars. An estimated 10% of global GDP in 2030. That’s what’s on offer to private sector companies through earnings and savings if they can contribute to the achievement of the Sustainable Development Goals (SDGs).

Can the sports sector claim a piece of that pie? The Business and Sustainable Development Commission, which referenced the $12 trillion opportunity as part of its Better Business Better World report, earmarked 60 fast-growing market opportunities in four areas that could generate most of the economic impact: food and agriculture, cities, energy and materials, and health and wellbeing.

Sport isn’t directly related to these four areas (apart from, in some instances, health and wellbeing), but professional sports organisations can absolutely play their part in the 60 opportunities referenced.

Clubs and teams operating or owning venues that cater for fans on a regularly basis are well-placed to helping reduce consumer food waste, for example. They can also take steps to make their facilities more energy efficient, or convert to 100% renewable energy like Arsenal FC and Forest Green Rovers.

Arsenal has made an economic opportunity out of both. In November, the Premier League club installed an energy-saving battery storage system in its Emirates Stadium that allows it to sell energy back to the National Grid. Fan food waste is also turned into energy via anaerobic digestion to compliment wind and solar energy.

Affordable housing (via large stadium developments), electric and hybrid vehicles, public transport in urban areas, cultural tourism, and even timber buildings (both Forest Green Rovers and newly-formed Canadian soccer club York 9 FC plan to build stadiums out of wood) are among the sustainable development opportunities listed that could feasibly be pursued by professional sports bodies, clubs and leagues.

But these opportunities will only exist for organisations that are wholehearted, strategic and targeted about making sustainability a core part of their operations – and that totally understand the business case for doing so.

Last December, I witnessed a keynote speech in which Oliver Dudfield, the Commonwealth Secretariat’s head of sport for development and peace, stressed the need for the sports sector to become targeted in its pursuit of the SDGs. Dudfield suggested, quite rightly, that sport had often been “vague” about its potential to stimulate sustainable development, and that clichéd phrases like ‘the power of sport’ contributed to the sector’s largely undefined approach.

The Kazan Action Plan, which identifies 10 out of the 17 SDGs and 36 out of the 169 targets that sport was best placed to positively impact, was the right approach to take, argued Dudfield, adding that concrete KPIs were the only way to measure real progress.

Singling out sport for its ‘undefined’ approach to SDG attainment is probably slightly unfair. Sectors such as energy, healthcare and transportation are undoubtedly better equipped to catalyse the seismic change the needed to achieve the 2030 goals. It’s also true to say that most organisations across the board are unsure about how they can effectively integrate the Sustainable Development Goals into their business strategies, creating a disconnect between good intentions and execution.

A PwC study into the private sector’s approach to SDG attainment found that while 72% of companies mention the goals within corporate or sustainability reporting, only half (50%) have identified priority SDGs, 23% disclosed meaningful KPIs and 27% mentioned the SDGs as part of their business strategy (below).

For organisations to make the SDGs a genuine business opportunity and bridge the gap between intentions and execution, they should follow four key steps, according to PwC: involve all parts of the organisations, not just CSR; chief executives and senior leaders must drive progress; reporting on progress must be of the same quality as financial reporting; and meaningful KPIs must be established to measure progress.

Energy company SSE, which conducts materiality assessments of all 169 SDG targets to identify priority areas in line with business prerogatives, and Danone’s approach of splitting SDGs into three areas of priority, were referenced in the report as good practice.

But the sport sector is a different kettle of fish. Success on the field, organising the next major event and attracting maximum sponsorship money are priorities that speak to a more short-term or linear mindset. That’s why concrete KPIs, as suggested by Dudfield and PwC, are crucial for turning intangible aims into business objectives that can be measured regularly.

Indeed, Dudfield may play a significant role in sport’s approach to the SDGs, overseeing the Commonwealth Secretariat’s work in creating a mechanism to quantify the sport sector’s contribution to sustainable development.

In the early part of 2019 the Commonwealth Secretariat is expected to lay out the terms of reference for that mechanism, although the project is expected to take more than a year to complete. Alongside that piece of work, the Kazan Action Plan and the Sport for Climate Action Framework, revealed at COP24 last month, provide sports organisations with a couple of reference points to help them build solid KPIs and more effectively integrate the SDGs into their business strategies so that they are seen as crucial to success, not a philanthropic add-on.

The question is, who will step forward in 2019 and take the opportunity?