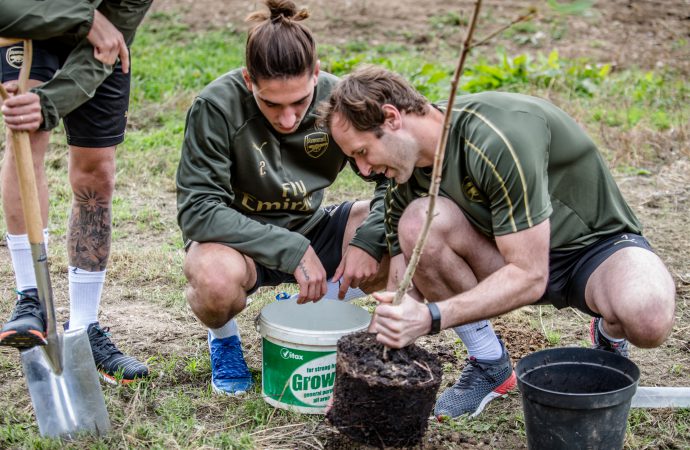 After switching to renewable energy through its partnership with Octopus, the 13-time English champion wants to cement its sustainable reputation through tree planting projects

A wood of 500 trees will be planted by Arsenal Football Club at its London Colney training ground in a bid to enhance its reputation as the Premier League’s sustainability pioneer.

The first 100 trees of ‘Colney Wood’ have been planted by first-team players Hector Bellerin, Petr Cech and Aaron Ramsey, alongside two young fans. An additional 400 trees will be planted throughout the 2018/19 football season.

Last year, Arsenal planted almost 2,000 trees in 50 schools across the UK with the support of its energy partner Octopus, which provides renewable energy to all three of the club’s main facilities – its 60,000-capacity Emirates Stadium, London Colney and Hale End youth development centre.

Octopus has been providing ‘green’ electricity to Arsenal since 2017, helping the club save seven million kilograms of carbon over that period – enough to fill the Emirates Stadium almost four times.

It has also installed a water recycling system at London Colney to reuse water that comes from the pitch, leading Arsenal to position itself as the “first Premier League team to go green”.

Bellerin, the club’s Spanish defender, is quickly becoming professional football’s poster boy for climate action after discussing his veganism, the threat of climate change and the issue of plastics in the ocean during recent interviews.

“It’s important for us to leave the planet as clean as we can, and it’s positive to take these steps,” said Bellerin who, like his teammate Cech, drives and electric car.

The players agreed that while planting the wood was an important but small step, the overriding motivation behind the project is to encourage Arsenal fans to do their bit for the planet. On social media alone, the club has 37 million Facebook fans, 14 million Twitter followers and 12 million followers on Instagram.

“The planting of the trees will not make a huge difference now but if everybody does their bit then we can start changing for good,” added goalkeeper Cech.