The England hockey player who volunteered to green the World Cup 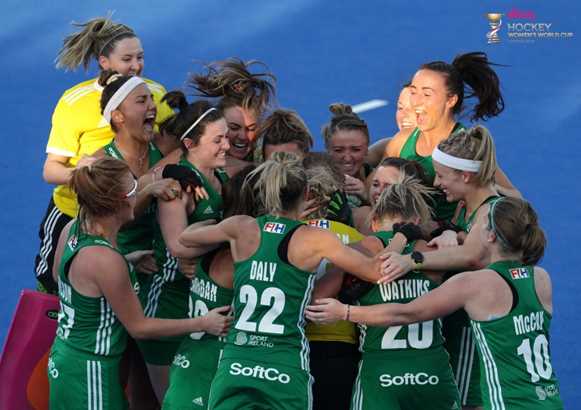 When Joie Leigh suggested that sustainability should be at the heart of the 2018 women’s showpiece, she walked out with the chance to shape the strategy

It was a sweltering evening in east London when the Netherlands beat underdog Ireland in the final of the 2018 Women’s Hockey World Cup. With the temperature peaking at around 27°C, the athletes could count themselves unlucky for having to contest what was probably the biggest match of their careers on one of the hottest days of the year.

But this is the United Kingdom in 2018. And 27°C has been par for the course all summer long.

To the people living on the stereotypically grey and chilly island in north-western Europe, it’s pretty clear that something is changing. Summers rarely get this hot on a sporadic basis, let alone for a sustained period of time.

Europe in general has suffered with uncharacteristic heat for practically the whole season. And while the evening of the 5th August 2018 will live long in the memory for both the Dutch and Irish fans of hockey (no Ireland team had ever made it to the finals of any senior tournament), the rising heat will be of concern to both nations.

A combination of an increased number of storms, flash-flooding and sea level rises has Ireland braced for potentially disastrous damage to coastal areas – where approximately 40% of its population lives. In the Netherlands, the rising sea level is an even more pressing concern. Around one-quarter of its total land mass lies below sea level and its government is tirelessly searching for solutions to protect the 10 million–plus inhabitants who could be affected so drastically.

In fact, all four nations competing in the semi-finals of the Women’s Hockey World Cup – the Netherlands, Ireland, Spain and Australia – are grappling with significant environmental impacts. The latter, currently in its winter months, is experiencing one of the worst droughts in living memory, while parts of Spain saw temperatures edge towards 50°C during its summer.

It’s only natural that hockey involves itself in the environmental conversation. And what better stage than the World Cup?

Joie Leigh, the former England midfielder who was part of the gold medal-winning squad at the 2016 Olympic Games in Rio de Janeiro (and geography graduate), knows all too well through her studies that the planet is in peril, and saw an opportunity to make the pinnacle of the women’s game the perfect platform to enact change.

And when she went to England Hockey, the national governing body and tournament organiser, to suggest making sustainability a key feature of the tournament, she received no resistance. In fact, she was offered a job (albeit on a voluntary basis).

“England Hockey is well resourced, but not that well resourced. So I started a conversation with its head of events to see if I could get involved and bring a really strong message around sustainability. She was keen and knew it was important, but admitted there wasn’t the time and resources to do it. So she asked me if I wanted to take the lead.

“I said ‘ermm, yeah. Cool,’” she says, laughing. “I walked out of that room taking on the role and having to learn quickly what they had already done.”

Although hockey has “never really had a sustainability emphasis before”, Leigh wasn’t working from a completely clean slate. The Olympic Park’s Lee Valley Hockey and Tennis Centre, a legacy of the 2012 Games in London that it was originally built for, was chosen as the venue for the tournament. It’s pitch was manufactured to use one-third less water per cycle than traditional pitches, so Leigh was off to a head start on water use reduction straight away.

And in terms of social sustainable development, England Hockey had already made the pledge to grow the sport in West Africa as part of its bid to host the tournament. It’s TAP (Targeted Assistance Program) provides much-needed equipment and resources to clubs and schools across West Africa. It also trains officials and coaches so the game can grow organically, while the Ghanaian women’s national team also receives support.

But Leigh was keenly aware that to make a splash the tournament’s sustainability operations couldn’t rely on a few unconnected initiatives. She knew that to embed sustainability in the World Cup she would have to develop a comprehensive strategy with objectives, priorities and responsibilities. And after taking on the voluntary role in September 2017, she had less than a year to get organised.

“He helped give me a bit of direction,” she explains. “After our chat I based our strategy on the One Planet Principles (see below) because it’s easy for people to understand and break down. I looked at those principles and mapped them against what I knew about hockey events and previous policy, then I laid out our objectives.”

Objectives were broken down into three sections: strategic objectives, operational objectives (see below) and accreditation objectives (to achieve as close to ISO 20121 as possible).

Creating Leigh’s narrative were the four strategic objectives: making sustainability part of the process; bringing to life a strong and impactful narrative; deliver on operational objectives; and seek positive partnerships and collaborations.

On the latter point, though, Leigh found that compromise was necessary. Plastic bottles – that Leigh was trying to eradicate – are a key component in the business model of one of the World Cup’s main sponsors, Harrogate Spring mineral water. While it was impossible for the company to ditch plastic for the event, it did buy into Leigh’s vision for affecting the behaviour of spectators be installing an activation area designed to engage them in conversations around recycling. Most of the bottles and bags Harrogate Spring gave out were made from recycled plastic.

Leigh had more luck on the plastics front with the tournament’s catering partners, Kerb, which didn’t provide customers with a single piece of single-use plastic. Her target of zero waste to landfill was also achieved as the competition’s waste partner managed to separate all waste on its Northampton site. Under Leigh’s watch, public transport became the most attractive means of reaching the venue as she convinced the organisers to opt against offering car parking spaces.

But the time constraints and lack of resources made implementing the strategy a challenge.

“I didn’t have the capacity to influence everything, so I tried to influence those who were already in their roles to start asking questions about sustainability,” she tells The Sustainability Report. “But I came into the planning a year ahead of the competition while the organisations had been planning for three years – so there were things in place that I couldn’t shift.

“People were already really stretched, but they were still open and willing to take the sustainability agenda on board. I didn’t need to sell it, but it was a challenge keeping everyone on track with objectives when they already have a lot on.”

Pulling together a report reflecting all that work will be the next challenge for Leigh on her sustainability journey, particularly considering the effort it will require to collect data from all the event’s stakeholders – all while taking on two new endeavors in a foreign country.

Somewhat ironically, it is the Netherlands that Leigh now calls home after securing the chance to continue her playing career in Amsterdam. She has simultaneously agreed to become a representative for Dutch sustainable water nonprofit Join the Pipe, which has installed 2,000 water refill stations around the Netherlands and Belgium, including 35 major events, to encourage people to stop buying plastic bottles.

“I want to keep working with events and the goal is to have events that are single-use plastic free by providing refillable bottles and water stations,” she says. “From a hockey perspective, I’d like to keep building the project we started at the World Cup and take it into the Pro League. That would be more of a voluntary role, but I definitely want to keep my hand in with that.”