Integrated approach the next frontier 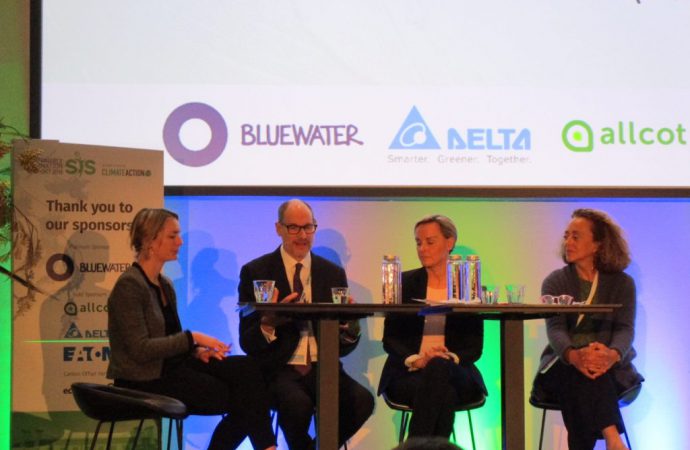 Conference season demonstrated a raft of good sustainability work in sport – but lasting change is likely to come via an integrated, unified approach

Before I go any further, I want to take this opportunity to thank you for reading The Sustainability Report during its embryonic stage. Hopefully the content has been valuable thus far – and will continue to be. For those of you who took the time to get on the phone (or Skype) to offer me crucial nuggets of advice before I launched the publication, I’ll always be grateful.

Fortunately, I had the chance to meet many of you at Sustainable Innovation in Sport two weeks ago in Amsterdam. It was the first of three sports conferences I attended over the space of a week at the Johan Cruijff Arena (formerly the Amsterdam Arena), and to some extent, all three revealed the challenge facing those fighting to make sport an industry synonymous with sustainability.

Sustainable Innovation in Sport opened up with a keynote address delivered by Michelle Lemaitre, the International Olympic Committee’s (IOC) director of corporate development, brand and sustainability, and she asked a question that was consistently revisited over the course of the two-day conference:

“How can the sport sector move from ad-hoc initiatives and projects done in isolation to integrated sustainability?”

If there was one thing demonstrated beyond doubt by every single one of the keynote speeches and panel sessions, it’s that there are several, high-quality sustainability programmes being implemented by a number of sports organisations across the planet. From team sports to motor sports, small organisations to FIFA and the IOC, there are committed people making a difference through their work, day in day out.

But when it comes to sustainability being at the core of an organisation’s mission, the examples become fewer and further between.

There are a few reasons for this, many of which were explored during a session on building a successful sustainability strategy, chaired by David Stubbs, the man behind London 2012’s sustainability plan.

The first question mark is around the appetite of sports organisation to change, and change sufficiently enough so that protecting the environment, and contributing to other societal issues, are at the heart of their mission.

“Sport itself is one of the most innovative fields. If you have the same tactics, you soon get whipped. Every team, every player, every athlete is looking to improve, find that edge that makes the win,” said Stubbs during the session. “Why is it that sports organisation, the governance of sport, is one of the most conservative, rigid things in the world?”

In the UK, for example, the launch of the Code for Sports Governance, which is forcing national governing bodies to make their boards more diverse in terms of race, gender and skillset, may become the catalyst for a more holistic approach to sustainability in sport. However, the UK’s sports policy document, Sporting Future, has no mention of environmental sustainability.

And this doesn’t take into account the number of private organisations who own professional sports teams that are not bound by strict obligations to improve their sustainability credentials.

As SandSI co-founder, Dr Allen Hershkowitz, said, sports organisations are “complex” and “multi-layered”. And their missions are not driven by sustainability.

A few days later I was back at the Johan Cruijff Arena, the home of Ajax Football Club, first for the Sport Analytics Conference, then for the World Stadium Congress.

The former started off well enough, with the arena’s chief innovation officer Henk van Raan using his keynote speech to reveal how the venue uses analytics to make sure it’s being efficient and sustainable. But similar content was sparse thereafter.

During the World Stadium Congress, Sébastien Duprat, who worked on the sustainability strategy when France hosted the 2016 European Football Championships, and Steven Wilbrenninck, who is helping to design the renovated Camp Nou in Barcelona, flew the flag for environmental sustainability, while a number of projects with innovative approaches to sustainability were demonstrated.

But there was nothing that spoke to a truly integrated move to limit sport’s significant impact on the environment.

However, many people I spoke to during and after the events indicated their hopefulness that the tide was turning on this. They pointed to the work being done by the United Nations to create a standardised framework for all sports organisations trying to battle climate change.

This document will be published next month. And hopefully it will give the sector the much-needed platform to build on the great work already being done in a number of quarters, but pulling together in a consistent way.