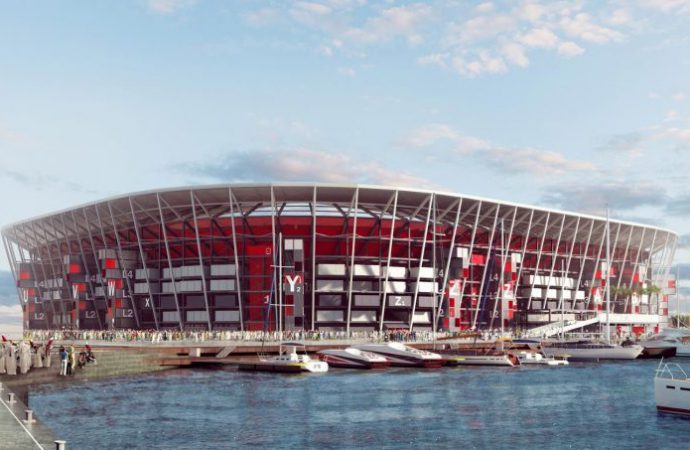 Engineers working on a demountable stadium for the Qatar 2022 World Cup have championed the liberal use of temporary infrastructure at mega events.

The Ras Abu Aboud, being constructed in the Qatari capital Doha, is the first and only FIFA-compliant demountable stadium. Matt Kitson, the Qatar regional director for global engineering firm Hilson Moran, said the concept would challenge the notion that “white elephants” had to be built to host World Cups and Olympics, and create more sustainable legacies.

Kitson commended FIFA for implementing sustainability reporting following the 2014 World Cup in Brazil, although he caveated that the reporting had to improve to avoid future hosts developing “ghost stadiums” similar to the venues standing empty in the South American nation four years after the showpiece.

He said that the Ras Abu Aboud, and other partially demountable stadiums being constructed in Qatar, had a business plan for the materials following the World Cup, and predicted the structures would be the catalyst for a big improvement in sustainability reporting to FIFA.

“What’s the purpose of building structures that are not used later? Structures that are considered socially and economically poor,” asked Knut Stockhusen, managing director of the project’s structural engineer, Schlaich Bergermann Partner.

“There’s nothing worse for creative people to see their own work being destroyed or not being used.”

Stockhusen said the stadium was “modular, easy to construct, transportable and plug-and-play” to make construction and dismantling as easy as possible. All horizontal and tangential beams are the same size, as are the roof beams, so that the whole stadium can be loaded onto one container ship and moved on following the tournament.

Plans for the materials, which include shipping containers, have not been finalised. However, it was suggested that the Supreme Committee, Qatar’s World Cup organising body, may donate the materials as a permanent stadium to a less economically mature region of the Gulf state.

Following an extensive period of testing and research (with a particular emphasis on climate), the prototype for the facility is being constructed in China. The venue will be totally made of steel.

“We really have to mention the progressive thinking of the Supreme Committee, who were very supportive of this endeavor,” said Stockhusen. “When the competition was launched they asked for a sustainable idea for an existing stadium, but as a team our three offices (Fenwick Iribarren is the architect) decided to extend the idea with a fully demountable stadium.”

But he added: “This of course is not the answer to all the sustainability questions out there. It cannot be that all stadiums are like this (demountable) because, suddenly, we’ll have a lot of containers travelling around and that’s not sustainable.

“It’s one contribution, and if we combine it with different solutions we’ll get a little better.”