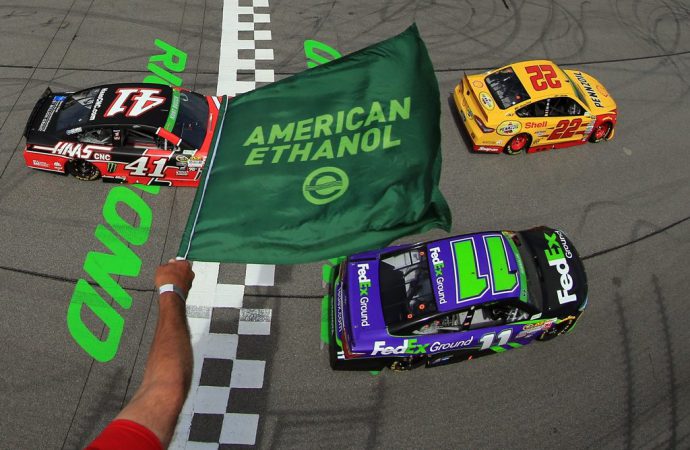 “If we can take 1% of our 80 million fans and change their behaviour, that’s impactful”

In August 2017, The Boston Globe headed to Tennessee to interview a bunch of NASCAR fans. The subject? Donald Trump’s presidency. Seven months after his election to office, the majority of those canvassed were positive about his position on trade, political correctness and his vision for the future of the USA.

Text was juxtaposed next to images of Confederate flags and National Rifle Association plaques, illustrating a stereotypical view of NASCAR fans.

But, no matter their political persuasion, there is one area of policy the majority of NASCAR fans and President Trump don’t appear to agree on: climate change.

Trump’s skepticism of global warming is well documented, even pulling the US out of the landmark Paris climate agreement. However, the vast majority (88%) of NASCAR fans disagree, believing that the Earth is indeed going through transformative climate change, with 76% of those feeling personally responsible for combating it, according to NASCAR statistics.

“Our fans are outdoors men and women,” Catherine Kummer, NASCAR’s senior director of green innovation, tells The Sustainability Report. “They care about the environment. They show up to the track on a Wednesday and they camp until the next Monday after an event on Saturday or Sunday.

“They spend a significant amount of time outdoors and know that our sport is directly affected by weather.”

NASCAR has been doing its bit for the planet for a decade, launching NASCAR Green in 2008 to make the motorsport as environmentally sustainable as possible. A large part of the work that Kummer and the NASCAR Green team have been doing is leveraging the strength of feeling fans have for the outdoors – and the sport – by creating initiatives that give them ownership for tackling the problem.

Alongside its title sponsor, Monster energy drinks, and Pocono Raceway, NASCAR launched the Monster Energy NASCAR Free Friday campaign in which fans can enter the Friday night race for free if they bring an empty Monster can to be recycled. In 2017, during its inaugural campaign, 4,000 cans were collected and recycled.

“Is 4,000 cans a lot of cans in the grand scheme of things? No,” says Kummer. “But if we can take 1% of our 80 million fans and change their behaviour based on what they experienced at a NASCAR race, or what they saw from a NASCAR driver or employee, that’s really special. That’s impactful.”

In 2017, NASCAR Green also rebooted a digital tree planting programme that it initially tested out six years ago – “the first ever in sports”. Originally founded in 2012 alongside conservation non-profit Arbour Day Foundation, the scheme asked fans to pay $1 to plant a tree using social media and email campaigns.

That campaign yielded donations from 1,000 fans over the course of three weeks. But when it was brought back last year, the new campaign encouraged 3,000 people to donate over 48 hours – a 200% increase over a far shorter period of time. And the average pledge was $5, more than the recommended $1 donation.

“I thought, ‘you gotta be kidding me. What NASCAR employee is planting all these trees? There’s no way these numbers are going to be this high’,” Kummer jokes. “Let me be clear: I realise these numbers aren’t gangbusters, but this is NASCAR fans committing their money to something they’re not going to see. They get nothing but assurances from NASCAR that this tree is being planted.”

It demonstrates, in part, that the public’s awareness of the impact of climate change has increased over that five-year gap. To create maximum impact, NASCAR matched the money raised last year and asked its sponsors to do the same.

The fan engagement piece is a small part of one of the most respected eco-friendly strategies in sport. NASCAR cars race on an environmentally friendly biofuel called Sunoco Green E15 (that contains more oxygen than most fuels), there are large-scale recycling and food diversion efforts at all venues, and 120,000 Goodyear racing tyres are recycled annually.

But with races occurring across 38 weekends per year, in different parts of the country, at race venues that NASCAR generally doesn’t own, Kummer admits keeping things sustainable consistently is a “logistical challenge”.

“NASCAR doesn’t own the majority of the facilities that we run on. There are two different ownership groups – International Speedway Corporation and SMI. NASCAR owns one track,” explains Kummer. “That being said, we’ve developed relationships and ecosystems with our drivers, our teams and our tracks that means we’re all rowing in the same direction. If we’re not, we can’t maximise impact (see below).

“Myself and others on the team work with each of those stakeholders to provide operational tips and functions to the best of our ability.”

All venues are different, says Kummer, which adds to the challenge. Some are brand new, hosting 200 events per year, while others were “built in the 1950s”. In “some instances” being more sustainable is saving venues and teams money, but NASCAR Green is “still working to figure it out” how to turn environmental sustainability into a profitable endeavor for everyone connected with the sport, consistently.

Kummer highlights Roush Fenway Racing as a team that is particularly making strides on the sustainability front. All its buildings are sustainably designed and it’s chief sustainability officer, Ian Prince, has been in his role since before NASCAR Green’s inception, making the business case for eco-friendly practice.

On Kummer’s agenda for 2018 is the continued reduction of impacts NASCAR can control, like waste diversion, and offsetting uncontrollables, like developing reforestation and biodiversity initiatives to compensate for unavoidable air travel. Energy efficiency options are being explored for NASCAR’s own premises and the organisation is working closely with sustainability-focused university students to generate ideas for the future – with one particular project focused on making sustainability more economically viable.

“These grad students are the future. They are going to be changing the world and making it a healthier place for generations to come,” says Kummer. “That’s compelling. That’s intriguing. I want to let these individuals dive in, keep us honest, and keep us on other things we should be looking at.”

All in this together

2. Michigan International Speedway president Roger Curtis has vowed to make the track the “greenest” in NASCAR, with work focused on reducing the amount of energy consumption.

4. Roush Fenway Racing recycled more than 98 tonnes of metal, paper and plastic waste in 2014 and also recycles 96% of every race car that comes back from the track.