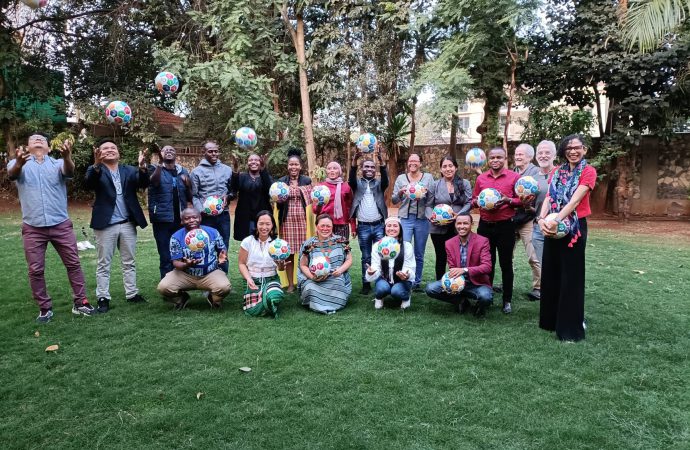 Innovation is pivotal to addressing the climate crisis, but that doesn’t mean every measure to tackle it needs to be swish new technology. Despite the mounting consequences of global warming, the methods of the people living with the lowest carbon footprint on the planet continue to be overlooked.

“Indigenous people are the secret to the biodiversity crisis,” declares Filipino sport for development consultant Valeree Nolasco. “They inhabit and guard the most intact ecosystems on the planet. Even though these are the people who know how to live in harmony with nature, some indigenous communities are not even recognised as indigenous people. It’s very important that their messages are amplified.”

After working on economic policy in the Office of the President of the Philippines, Nolasco recently began working as a consultant for NiaTero, an international organisation that supports indigenous guardianship of their territory. Through this work, she connected with Spirit of Football (SoF) at COP26, a not-for-profit organisation using football to drive social change and development.

“If you come up with any kind of advocacy and you want to engage the youth, it’s hard to pull them in and interest them,” Nolasco explains. “But the moment you use sports, the moment you bring up football, it becomes an opportunity for the youth to converge and discuss important matters. Football is a shared language.”

Forty-four footballs with the SDGs printed on them, sustainably produced by Alive and Kicking in Kenya, were given to Nolasco by SoF to distribute among indigenous representatives around the world. “We’re hoping that using the ball as a tool, they can tell the stories of what they’re fighting for within their different communities”. The stories will be shared in a few weeks at COP27 in Egypt.

One month later, the Post 2020 Global Biodiversity Framework will be finalised at the UN Biodiversity Conference (COP15) in Montreal, where governments will agree upon a new set of goals to provide guidance on protecting and restoring nature through 2040.

The framework provisionally contains 21 targets to achieve by 2030, including:

– ‘Ensure that relevant knowledge, including the traditional knowledge, innovations and practices of indigenous peoples and local communities with their free, prior, and informed consent, guides decision-making for the effective management of biodiversity, enabling monitoring, and by promoting awareness, education and research.’

– ‘Ensure equitable and effective participation in decision-making related to biodiversity by indigenous peoples and local communities, and respect their rights over lands, territories and resources, as well as by women and girls, and youth.’

Nolasco believes the sport community, through work akin to SoF’s, can use its platform to help embed the Post 2020 Global Biodiversity Framework with a greater sense of urgency, but unless there’s an incentive for sport stakeholders to promote indigenous messages, such as leveraging an association with indigenous communities to reach a larger audience, the task could prove formidable.

“The idea of there being indigenous people who have this traditional knowledge, it might be a little bit exotic for them [sport organisations and institutions],” Nolasco remarks. “The first step is informing stakeholders across sport about the Convention on Biodiversity’s targets and why they’re important.”

In 2021, there were 40,000 registered participants at COP26, whereas the first part of COP15 only had 4,500. The fact is that climate change conventions receive greater press coverage and message amplification than conventions on biodiversity, but after attending many environmental conferences in recent years, Nolasco believes there’s now more openness to indigenous knowledge:

“The science is all there, so there’s no need to sell it. It’s just a matter of making people more aware of it. We feel the momentum building.”