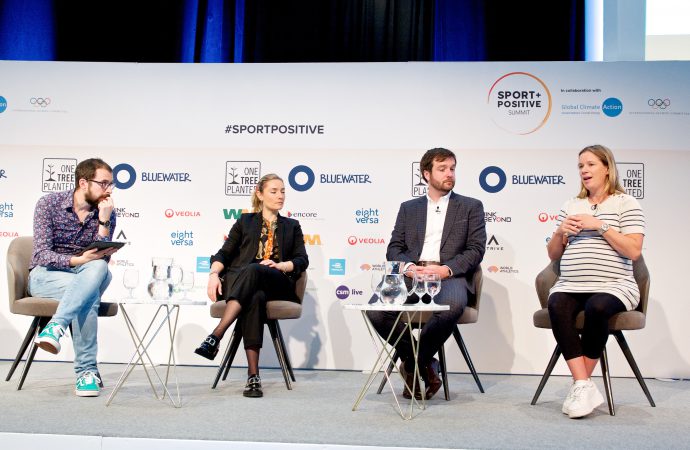 Are Formula E and SailGP double-header weekends in the same city practical? This and many other collaborative solutions to the climate crisis were discussed during panel discussions at Sport Positive Summit 2022

Collaboration was the overarching theme at Wembley Stadium in early October, with Sport Positive participants acknowledging that we cannot act in isolation when it comes to climate change. In the words of Julia Pallé, Formula E’s sustainability director, while sport is an industry that “is, by definition, about competition”, organisations have to collaborate to fend off a common threat.

But, before we start to investigate the feasibility of collaboration between individual sporting entities, both  Lindita Xhaferi Salihu, sectors engagement in climate action lead at the UNFCCC, and Julie Duffus, Olympic Movement sustainability senior manager at the International Olympic Committee, stressed that colleagues and teams within clubs, leagues and federations need to work in a more joined up way to make sustainability a strategic priority.

“We need to move to where sustainability is just mainstreamed across the whole of the organisation,” said Duffus.

If that foundation can be built within organisations, then true cross-company collaboration can be the next step. However, according to Seán McCabe, climate justice officer at Bohemian Football Club, the motivation for doing so has to be authentic.

“We have to be honest with ourselves about what we want to motivate our funds towards,” he said. “That has to be a much fairer future. We have to use climate action as a way to redistribute opportunity and advantage around our communities.

“Everything’s holistic in this challenge. No country reducing its emissions alone is going to cause us to avoid the crisis. And similarly, no institution is, so if we can support our entire community in achieving zero, and if we can share what we learned with others to do so, I think that’s the spirit that we need to tap into.”

This can’t just apply to local areas, but host communities around the world. Pallé talked about the work Formula E was doing at race destinations, particularly in the Red Hook area of New York, one of the poorest parts in the US, where local people are employed for roles associated with the event.

Moving beyond individual events, both Duffus and Fiona Morgan, director of purpose and impact at SailGP, stressed that collaboration with suppliers was among the most effective ways of reducing sport’s carbon footprint. Morgan explained that the league’s strong association with sustainability meant “partners are coming to us” to explore innovative ideas, and while competitions like SailGP and Formula E have been built around purpose and sustainability, Pallé insisted that it isn’t too late for more established competitions to do the same.

“It comes down to the culture of the organisation,” she said. “Building purpose driven partnership is a reality that I think we can all work towards.”

Leveraging partners’ sustainability expertise in that transition is a good starting point. Hannah Simpkins, vice president of club operations at Liverpool FC, discussed their partnership with SC Johnson to address plastic recycling. “We didn’t know everything. [Our partners] offered a really good sounding board and things to avoid.”

SailGP is well established with partners that share their values, but they’re setting ambitious targets to drive further collaboration.

“By 2025, the goal is to have all on-water operations powered by clean energy,” said Olympian and sustainability ambassador of the IOC and SailGP, Hannah Mills. “It’s a really ambitious target because we don’t have all of the solutions yet. The marine industry hasn’t adapted to electrification. There’s so many different options and ways to go about it, but what it does is put pressure on partners, it puts pressure on the organisation, it puts pressure on everyone involved, to actually collectively go, ‘Okay, well, we can see where we’re trying to get to. Yes, it’s going to be hard. But let’s work together to try and get that.’ We generally set quite hard targets on ourselves because we’re ambitious.

“I view sport as a startup. We’re innovative, we can change quickly, we can adapt. I think that for me, it’s quite a powerful thing to utilise, to test partnerships and solutions very quickly and fail fast, which is what we need to do to find the next solution.”

Pallé agreed, adding that Formula E was a platform to pilot projects that “fail sometimes”, but “that’s the whole point of innovation”.

One idea that was floated by Morgan was for sports to team up and host double-header events to potentially reduce carbon emissions around logistics and fan travel. If Formula E and SailGP had a race in the same city or location, she said, it could also be the “perfect opportunity to generate fan collaboration between sports”.

A travel solution that has been discussed at SailGP, which Mills believes can be translated to other sports, is having two simultaneous events – a European and rest of world event – before staging a final where everyone converges.

Asked whether Bohemians could work with traditional on-pitch rival, Shamrock Rovers, on issues like climate, McCabe said that it was the wrong approach to be talking about competition and climate action in the same breath

“I think there’s a great temptation when we get into this conversation to talk about competition because we’re sporting organisations,” he said. “But actually, the one thing that we shouldn’t be competing on is this decision. The challenge of the climate crisis is a challenge of interdependence and it’s a challenge of enlightened self-interest, so we have to have the courage to see that there’s no point in being a leading climate club and lording it over Rovers. That doesn’t make any sense –  it’s counterintuitive. To me, and we’ve spoken about this at the club many times, we want everything we do to be open source and totally available to everyone else.”

McCabe insisted that being unafraid of backlash, whether from fans or co-workers, is a crucial part of our collective journey towards survival: “It might be a little bit daunting and it might be a little bit long, so it has to come down to a personal courage coupled with a conviction that unless we try, even if we fail, we’re going to leave the world in an awful state. Everyone here has to try.”

“Sports can bring together billions of people through their fans to really push the topic of sustainability,” Pallé added. “It’s important to get our house in order. But ultimately, if we do it authentically, then we send a very strong message about living a more sustainable lifestyle. The reality of neuroscience is telling us that we need to send a positive message if you want people to change.”

A reference to Formula E’s multi-year partnership with UNICEF, which focuses on clean air for young people, prompted McCabe to illustrate how the collaborative efforts of sport can help realise a brighter future for younger generations.

“In July of this year, the UN General Assembly recognised that everyone around the world has a right to a healthy environment and our government has to hold that right,” McCabe explained.

“Children have always had the right to play; children are such a big part of what we do; children are such a big part of sport. I’d love to see a global campaign emerge around children’s right to play in a healthy environment where we are encouraging our communities to put pressure on our governments to realise a right that has never been granted to us all.”