Sustainability: Is athletics on track? 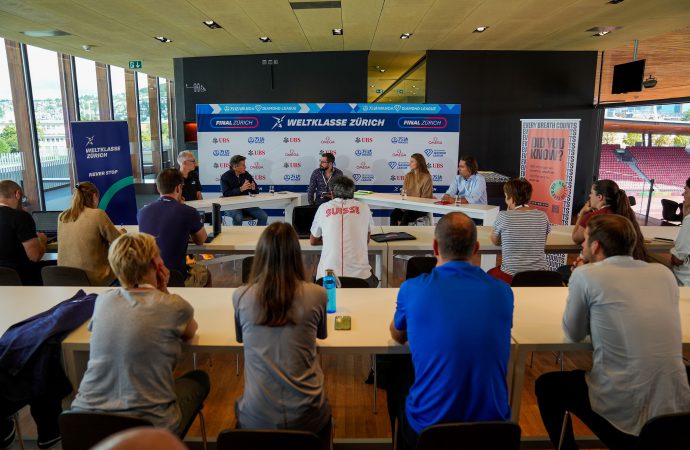 As track and field athletes express their concerns around climate change, with 75% stressing that more needs to be done and 70% claiming that the effects of climate change had impacted their training regimes, the issue is firmly on the agenda for the sport’s governing body, World Athletics.

Ahead of the Diamond League finale in Zürich, on a panel titled ‘Sustainability: Is athletics on track?’ alongside Ajla Del Ponte (Swiss sprinter and 2021 European Indoor 60m Champion), Christoph Joho (co-meeting director of the Weltklasse Zürich) and Tiberio Daddi (associate professor in Corporate Environmental Management at the Sant’Anna School for Advanced Studies in Pisa), Seb Coe, the federation’s president, explained that climate change and environmental issues like air quality were such a crucial topic, it would inform decisions about where World Athletics events could be hosted in the future.

“We have to put them [athletes] into environments where they’re not going to be having long-term implications from the choices we make, and that’s going to be tough,” Coe said. “We came to the conclusion a few years ago that if we’re not about clean air, then we’re probably not about much else.

“The average marathon time is around about four hours. They’re shifting more oxygen and air through their respiratory systems in the time that the average sedentary person is doing between 48 and 72 hours. Even small levels of particulates getting into soft tissues, in the lungs or the alveoli can cause catastrophic damage going forward. So having our air quality monitoring units in some of our big iconic venues, where we’re able to say to athletes that are competing at the elite level: ‘There are times in the day to avoid,’ and we can give that same information, for instance, to runners in those communities.”

Through its Every Breath Counts campaign, and its policy of installing air quality monitors at a number of its certified tracks, World Athletics has identified – and is trying to address – an issue that is materially impacting its key stakeholders. The organisation has also, in some instances, drastically altered the start times of endurance events as temperatures increase. The marathons at Doha 2019 began at midnight when temperatures were coolest, but 28 competitors still ended up pulling out of the women’s event.

Altering start times isn’t always enough. The marathons and race walking at the Tokyo 2020 Summer Olympics were moved to Sapporo, 800km north of Tokyo, because temperatures were deemed too hot in Japan’s capital. And yet, temperatures still reached 41℃ in Sapporo during the events.

Reflecting on those incidents, Coe suggested that if the Paris 2024 Olympics were held this summer, temperatures would have reached 44℃ , emphasising that conversations about making the sporting calendar more flexible are required.

“We need to not only be saying something, we need to show that we are able to break out of our sport silos and be sitting at the table and making a contribution,” Coe said of connecting with younger audiences and resonating with wider society.

“Young people don’t just look at us as an international federation. It may just be a subliminal observation, but I think they’re asking themselves fundamentally a very important question when they look at us and say: ‘Do they reflect the world I live in?’ And if we don’t, then the reality of it is that they’ll move on to something that does.”

Joho echoed this sentiment, remarking that “if you don’t respond or position yourself in the right direction, you will become irrelevant.” He noted that younger audiences can recognise how transparent organisations are within a matter of hours because of digital channels like social media.

Weltklasse Zürich, which is the organising committee of the Zürich Diamond League event, is moving towards net zero across all its operations by 2028 to mark the meeting’s 100th anniversary. Joho said: “We want to be a role model in athletics. We did our first analysis in 2008. I made the whole ecological analysis of our carbon footprint and then we decided to reduce or compensate.

“Last year, we changed the hospitality concept to use food from within an area of around 80km – 10 years ago, the meat came from Argentina. If you do it [positioning as environmentally sustainable] right, it’s also an opportunity to get more sponsors and develop the sport at the same time.”

Del Ponte believes athletes made the point that while athletes are able to use their voice to communicate concerns about climate change, they could also become more involved in governance. However, it would take an open-minded approach from those in governance roles to listen to athletes who aren’t sustainability specialists but want to make a difference.

She acknowledged that, at times, there could be tension for athletes who want to excel at their jobs, but have to travel around the world – increasing their carbon footprints – in the process.

“I’ve always presented myself as wanting to make a change, [but] at some point I had to choose and do my job. It’s not really in line with what I’m trying to achieve. It’s this game that we are now faced to play, and sometimes it’s hard to decide what is best for me, because of course, we’re also representing sponsors, we are representing ourselves as a person.”

Del Ponte added: “I went to Doha [in 2019], but this was an opportunity for me to grow as an athlete. Everyone’s situation is different, and we have to adapt as athletes as well.”

While unavoidable flights for athletes, fans and officials is something of a ‘wicked problem’ for the sports industry, Daddi argued that substantial enough progress can be made in other areas where stakeholders have more ownership.

Last year, Daddi and his colleagues calculated the environmental footprint of a Real Betis UEFA Europa League match, finding that mobility, especially international flights of the away team’s players and fans, were the key contributing factor to the overall carbon footprint at 51%. But this means that the other 49% is composed of every other contributing factor where more progress is feasible. The researchers calculated that planting 2,400 trees would be needed to absorb the carbon equivalent produced from the match.

“Sport in environmental sustainability, according to my experience, is a little bit delayed compared to other sectors like manufacturing,” Daddi says, “but the tension is increasing and ultimately that is good.”

But for athletics to turn this tension into positive action, Christoph Joho emphasised that environmental sustainability needs to be seen as more of an investment rather than a cost.

“We shouldn’t hide from the fact that what we need to do is going to cost,” Coe urged, but this is outweighed by “investing in children and grandchildren by providing a sustainable environment for them.” He also expressed concern at some politicians already beginning to “ease away” from 2030, 2040 and 2050 carbon reduction targets while turning back towards fossil fuels.

Giving future generations a voice in political decision-making is an ongoing issue, but there also needs to be wider recognition that environmental sustainability isn’t just ecological, but social. Weltklasse Zürich is investing in a mentoring programme to employ more women in management roles. Joho expressed his desire to use the annual event as an example to educate the next generation of children; the 1000 UBS Kids Cup athletics events will also be included in their 2028 net zero mission.

Del Ponte also conveyed the responsibility of athletes to educate themselves and use their platform to educate others.

“We were not taught this in school, but it’s something that we can speak about and raise awareness,” she said. “If I begin to send messages, one step after another it will land somewhere.”