Repositioning towards sustainability can rewrite the formula 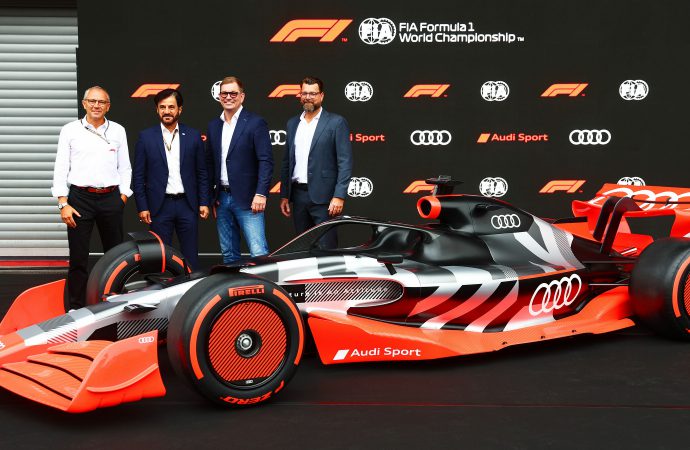 As part of Formula One’s mission to become carbon neutral by 2030, the Fédération Internationale de l’Automobile’s (FIA) new sporting regulations for the 2026 season were approved last week. The framework includes:

– Environmental sustainability: The 2026 power unit will increase the deployment of electrical power to 50% and utilise a 100% sustainable fuel

– Financial sustainability: Financial regulations will reduce the overall cost of power units while retaining the cutting-edge technological showcase at the core of Formula One

After 2026, “no new fossil carbon will enter the atmosphere from a Formula One car exhaust.” This is the green light that the Volkswagen Group, the 25th biggest company in the world, was waiting for. Earlier this year, CEO Herbert Diess confirmed that both Audi and Porsche, two brands falling under the VW umbrella, have discussed entering F1 since 2020.

With Alfa Romeo’s sponsorship of Sauber set to end after 2023, Audi are expected to purchase a majority stake in the company. Although their entry is official, Porsche’s negotiations on a deal to partner with Red Bull have reportedly stalled.

Porsche joining its sister brand in the sport would require the Volkswagen Group to fund two separate engine development programmes, a much more costly feat than “sharing designs and rebadging them.” But Toto Wolff, Team Principal and CEO of Mercedes’ F1 team, believes that developing two engines would be a “dual track strategy” allowing VW to hedge their bets, both for success on the track and transferring the most innovative electric technology to their road cars.

VW’s pre-conditions that were met by the new regulations include the abandoned MGU-H, “an expensive, complicated piece of engine kit which helps cars be more environmentally friendly but which has little chance of ever being useful in road car technology.” This will be replaced by increased electrification from the MGU-K and battery, which the FIA says will “increase the road-relevance of the cells, power electronics and MGU-K.”

“Formula One is both a global stage for our brand and a highly challenging development laboratory,” asserts Markus Duesmann, Chairman of the Board of Management of Audi. “The combination of high performance and competition is always a driver of innovation and technology transfer in our industry.”

Audi Sport GmbH, the high-performance car manufacturing subsidiary of Audi, has achieved record sales and earnings figures with electrical vehicles. “Sales doubled with the RS model offensive and the all-electric RS e-tron GT was successfully brought to market,” say Audi in their F1 entry press release, highlighting the connection between motorsport and road vehicles in performance and innovation.

The RS Q e-tron powered Audi to four stage wins at the Dakar Rally earlier this year. The manufacturer has raced in the World Rally Championship, Formula E and the World Endurance Championship, but never in Formula One and what they are unmistakable in calling “by far the world’s most important motorsports series.”

In 2021, F1’s cumulative TV audience surpassed 1.5 billion viewers. It also had the largest growth in social media followers of every major sport. Personality marketing, streaming, digital video and Netflix’s Drive to Survive series have all contributed to the sport’s soaring popularity, especially among younger audiences; the age bracket most commonly concerned about environmental issues.

Even in sports with an unsustainable image like Formula One, it’s evident that paradigms are changing. The 2026 regulations, shifting the sport further along the sustainability spectrum, have unlocked doors to fruitful new partnerships and frontiers. F1 can continue thriving in a manner that preserves the planet for future generations, while Volkswagen can meet their wider corporate goals by entering the sport.

Porsche can “enhance the power of its brand by participating in F1 – and it will likely make money while doing so,” but it remains to be seen whether a deal can be reached with Red Bull before the 15 October deadline.

“This is a major moment for our sport that highlights the huge strength we have as a global platform that continues to grow,” says Formula 1 Group CEO Stefano Domenicali. “It is also a big recognition that our move to sustainably-fuelled hybrid engines in 2026 is a future solution for the automotive sector.”