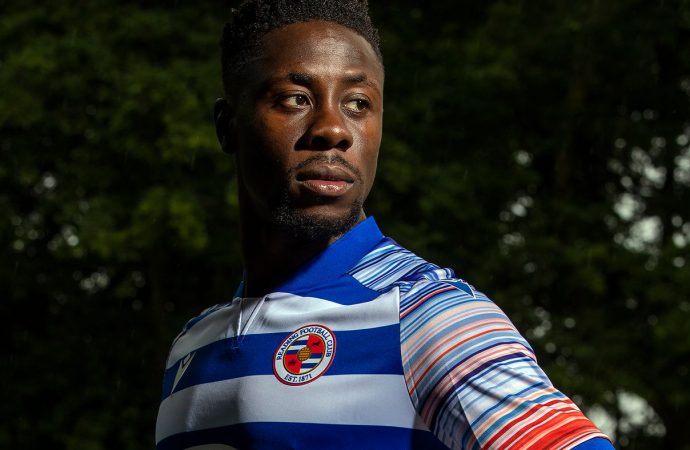 It only took Naby Sarr 14 minutes to score his first goal for the club, bulleting a header into the top corner before wheeling away with his ecstatic teammates in hot pursuit. The goal was enough to give Reading Football Club its fourth win in six matches, unexpectedly propelling a team that was unfancied at the start of the season to the top of the Championship table.

While the team’s recent on-pitch performances have caught the eye, its moves off the field have certainly captured the imagination as well, not least the decision to use its 2022/23 kit as the latest high-profile ‘canvas’ for Professor Ed Hawkins’ climate stripes.

The British summer began with the climate stripes adorning the hallowed stage at Glastonbury, and ended as the defining sight in the away end at Millwall’s New Den stadium, as fans wearing the design across their chests and arms celebrated an important win.

Hawkins, who works at the University of Reading, created the stripes as a simple visual to communicate how climate change had increased temperatures over time. He told The Sustainability Report that it “was great to see” the pattern replicated on both the club’s home (on the sleeve) and away (the whole torso) kits after starting the design process over a year ago.

“This has been a couple of years in the making,” says Tim Kilpatrick, head of commercial at Reading FC (known affectionately by its fans as The Royals). “We’ve been talking with the university about how we could work together for some time, but we couldn’t really put our finger on what that looked like. Then, during lockdown, I had a Zoom conversation with the university’s commercial director and I noticed a climate stripes canvas in the background. He explained what it was to me and it was like ‘bingo’ – that’s how we should be working together.”

The kit, Kilpatrick adds, was a “very visible” way to showcase the club’s commitment to taking climate action. But it was a brave step. Fans often push back against changes to tradition and, for some, the stripes on the sleeves of the home kit was too much of a departure from the norm.

Initially, feedback for the home kit was “quite negative”, with Kilpatrick estimating that around 70% of comments on social media about the design were disparaging. However, increasing media attention and criticism from rival fans and GB News (a media outlet that has positioned itself as a bastion on ‘anti-wokism’) has since galvanised fans and brought them together behind the kit’s design.

So much so, Kilpatrick reveals, that sales are up 35% on what was originally forecast, creating a “bit of a problem” when it comes to supply.

“Overall, it has been really positive,” he says. “We’re quite proud of what we’ve done and the important thing now is to keep on with that messaging and to create more activations around climate that will make this tangible for our fans.”

The kit couldn’t have been produced at a better time, adds Hawkins, pointing to the scorching heatwave that gripped much of the UK over the summer. Reading, as a town, broke its record for warmest day since records began and, like most places, faces a myriad of risks – from drought to extreme rainfall – if climate change persists on its current trajectory.

Dan Fernbank, the university’s energy and sustainability director is helping the club get its own house in order, mirroring its early-season resilience on the pitch with a resilience towards climate change. Together, the club and university are working on a 10-point plan:

“A lot of the things we’re doing around sustainability are very bread and butter,” Fernbank explains. “Monitoring energy properly, switching to LED lighting, etc. But I think there are opportunities for innovation. We’re very interested in looking at the potential for solar panels on the stadium and potentially working with the local community energy company to do that. That could also provide an opportunity for friends of the club and local people to invest in that scheme and take an active role.”

Hawkins agrees that people connected to the club should be involved, adding that fan engagement is among his top priorities for this partnership. Kilpatrick is hoping the club can facilitate this conversation by adding sustainability features that fans can interact with around the stadium, including the creation of food menus with ‘carbon scores’ next to each option.

“What we want to do is start the conversation among fans in the ground on a matchday and make it easy for supporters sitting next to each other to talk about heat pumps, electric cars and meat-free meals,” says Hawkins. “We live in tribes and usually listen more to people with similar interests. I think that’s a very powerful way of having those conversations and normalising them.”