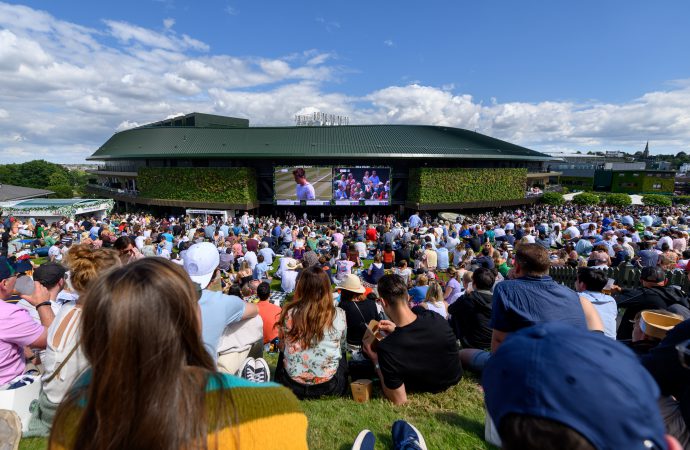 Hattie Park, sustainability manager for the All England Lawn Tennis Club, talks climate adaptation and mitigation as well as making the Wimbledon experience sustainable and spectacular for spectators

Even on a slightly overcast morning, Wimbledon is a sight to behold. From the vantage point just above the iconic Hill, all is there to see. Pristine tennis courts as far as the eye can see, punctuated by little flourishes of nature in the form of totally on-brand purple and green flower arrangement.

Centre Court, of course, is the dominant sight. Later on in the day, tennis’ most revered arena will host a quarter-final between Nick Kyrgios, this year’s most talked-about player, and Cristian Garin. And while stewards, staff and volunteers are hurrying about preparing for another frantic and exciting day, Hattie Park, the sustainability manager of the All England Lawn Tennis Club, guides The Sustainability Report around the estate to showcase what Wimbledon is doing to preserve the natural environment while serving up world-class tennis.

“Centre Court is celebrating its centenary this year and if we want to be putting on the same spectacular event 100 years from now we have to be climate resilient,” she says. “We’ll all be long gone, but wouldn’t it be amazing if the same wonderful outdoor English parkland setting is still here 100 years from now?

“So for us it’s about mitigating our impact on climate change and readying our estate to respond as well.”

Our journey takes us through the newly-constructed Technology Services Room, which Park says is a good demonstration of how Wimbledon wants to approach development projects going forward. Built with a timber frame and fewer materials, the new room accounts for less embodied carbon than one constructed via traditional means. Mainly off-site construction meant fewer journeys had to be made, and solar panels were incorporated into the roof.

The Millennium Building, built in 2000 to provide amenities for players and the press, will be redeveloped next incorporating these principles, turning “one of our least well-performing buildings into the best performing building in eco terms.”

Our stroll continues past the courts on the north and south concourses and through the hospitality areas, with Park checking in with members of staff to make sure everything is going smoothly from a sustainability perspective. Her enquiries are met with good news: at a food and beverage stand we’re told that the plant-based cream (to accompany Wimbledon’s world-renowned strawberries) has been a hit, selling better than expected, while a young man overseeing waste is encouraged by spectators’ willingness to put their rubbish in the correct colour-coded bins.

“It’s the bins, isn’t it?” Park says with a smile. “Guests coming to Wimbledon can’t see that we’re designing to reduce embodied carbon – it’s just not the fun story to communicate to people. We have to get the visible stuff right to the top so people can interact with it.”

For Park, it’s about making it seamless for spectators to have a sustainable and enjoyable experience at Wimbledon. Drinks are served in reusable cups, with some cups produced for 2021 still being used for the latest edition of the tournament. All cutlery is wooden and strawberries (whether they’re served with plant-based cream or not) come in card containers instead of plastic.

Wimbledon’s catering team adopted a ‘nudging’ behavioural science technique to encourage the purchase of vegetarian and plant-based food by placing it at the top of menus and highlighting the dishes as low CO2 options.

Park is quick to acknowledge Compass Group, the tournament’s official caterer, for its role in facilitating a move towards food with lower carbon impact, including local and seasonal produce. Walking around the estate, it’s clear that working with partners is an important aspect of Wimbledon’s sustainability work. As you pass through the accreditation areas, the first thing that meets your gaze is an electric Jaguar being charged (the car manufacturer is working towards providing Wimbledon with an all-electric fleet by 2025) and Park explains that water partner Evian has established a reward scheme for recycling.

A week before our visit, during a sustainability panel hosted by Wimbledon, single-use plastic water bottles became the main topic of conversation when former Great Britain No. 1, Laura Robson, suggested that the tournament organiser should ban them in the same way Roland Garros had.

The Sustainability Report asks Park if it was frustrating that, through all of Wimbledon’s leading sustainability work around carbon and biodiversity, plastic bottles dominate the conversation.

“There’s room for improvement,” she says, “and we’re working with Evian on what we can do for a solution, including refills on court. We’ll need to work out how we can make it seamless for the players. It’s absolutely on our radar, and although these things are never simple to fix it’s not beyond us.”

Park’s philosophy is that Wimbledon is a steward of the land – and that land is likely to significantly increase in size if and when the local council approves plans for the All England Lawn Tennis Club to take over the golf course across the road to enhance practice facilities and provide a 23-acre public park.

“We really are aware of the ecological value of the landholding and we’re really committed to preserving and protecting it,” she says before detailing plans to double tree cover, deculverting aquatic habitats and working towards Natural England’s biodiversity net gain metric.

Adaptation plans also factor in human health and athletic performance. The new show court that will be constructed on the acquired land will be designed to factor in different heat scenarios to “maximise comfort for the players and spectators”, while the increase in trees and proximity to the lake will provide more shade and ways to keep people cool.

As our tour comes to an end, the cloud breaks up, the sun streams in, the crowds increase, and everyone is gearing up to see if Kyrgios can take a step towards his first Wimbledon final. A controversial figure, Kyrgios’ extraordinary run to the final was overshadowed by on-court arguments and allegations of assault. However, he was also one of the more high-profile voices warning against the impact of climate change on tennis in a video produced by the BBC with Wimbledon.

Can we expect more players to become vocal about the issue, and what will Wimbledon do to facilitate that?

“It’s quite challenging as they’re rushing around and competing. I’ve got a plan for next year to try and do something that will work a bit better for the player community,” says Park. “Watch this space.”