“We want athletes to be excited about contributing to sustainable innovation” 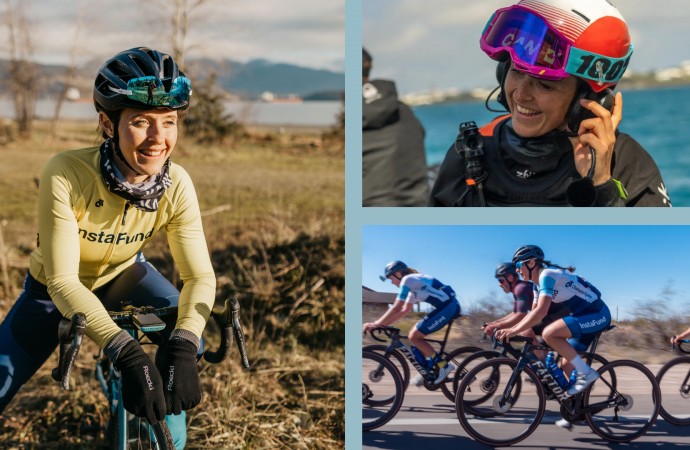 Isabella Bertold, the co-founder of the InstaFund cycling team and Canada SailGP sustainability advisor, explains how she’s attempting to push boundaries in both sports

Almost every other day. That’s how often Isabella Bertold typically wakes up to emailed CVs from riders desperately trying to join her InstaFund Racing roster, a women’s professional cycling team that competes in the UCI’s North American road events.

But far from the screen fatigue that can come from constantly managing inboxes and scanning resumes, the interest energises Bertold, not least because it demonstrates that her team’s purpose, beyond trying to win races, is resonating.

“Around 50% of the resumes we received last season referenced our purpose, and it wouldn’t surprise me if it’s even higher next time around,” she says. “It’s really on us to have deeper conversations with them during the interview process to weed out the people who are just saying they want to be part of the mission, and separate them from those who have a genuine personal story, a great idea or a special reference.”

InstaFund having a higher purpose beyond the podium is crucially important to Bertold, who built the team around the pledge to be climate positive.

Beyond that, the Canadian sailor and cyclist is constructing the fledgling team like a “startup”, shaping it into an “ideation or testing partner” for the companies in its ecosystem. One of her main goals is to champion circular economy principles and the use of more sustainable materials within cycling.

In her mind, cycling teams (or sports teams more generally) are perfect testing grounds to try new ideas in this field. Alongside her partners, she asks questions: What happens when the bike’s original life cycle is finished? Can it be recycled and broken down? Is there a way to turn it into something that would create further value?

As a team, InstaFund is able to test new innovations in real time and provide data and feedback. In many cases, ideation about sustainable ways of doing things originates within the team. Bertold believes that’s why there is a lot of interest from prospective team members wanting to belong to something with a purpose beyond winning, and that the camaraderie generated around this purpose has actually helped the team to achieve better sporting results, with a 2022 results chart dotted with consistently high finishes.

“Our riders are constantly bringing up ideas and they’re the ones testing and collecting data,” Bertold tells The Sustainability Report. “It’s also interesting seeing how some of our partners have very open communications, like a WhatsApp group with the entire team so that riders can drop ideas in.”

Having the right type of partner in the stable is important as InstaFund’s boundary-pushing mindset when it comes to sustainability is forcing a lot of innovation. Bertold’s starting point is that the team “doesn’t want to be working with partners” that either haven’t got a “big sustainability piece” themselves or have never expressed an interest in sustainability.

By and large, partners (and the designers and engineers they employ) are “open” to looking at things differently, but Bertold acknowledges the complexity facing companies exploring a transition from linear business to a more circular structure.

“We’re trying to push through the idea that it’s not necessarily better business just to sell more product and make bigger profits. Companies need to think about their business model a little bit differently, but I think that’s probably where we get a little bit of pushback,” she says.

“How do you make just as much money – or more – by selling less? I think that’s something that as a team we’re still only at the tip of the iceberg with in terms of looking at the cost savings along the supply chain within a circular economy. There are fun conversations happening between athletes and designers, with great ideas being thrown out there.”

Bertold, one of the top 10 sailors in the world in her pomp, has been tempted back out to sea by the new SailGP Canadian team, which has joined the competition in its third season. Enticed by SailGP’s purpose of accelerating sustainability through sport and the transition to clean (‘Powered By Nature’) energy, Bertold joined the team as a strategist both at the helm and in terms of its wider purpose.

The team started its maiden season strongly in Bermuda last month, scoring a top three finish. But its performance on the water is only one part of the picture, with Bertold keeping a keen eye on the team’s showing in the SailGP Impact League, which awards points to each competing team based on the sustainability projects they instigate against a set of 10 criteria.

Supported by Ocean Wise, its Race for the Future partner, the Canadian SailGP team plans to deliver a “comprehensive outreach, education and inclusivity plan” focused on protecting and restoring the ocean. According to Bertold, the challenge is shifting the athletes’ mindset away from just winning on the water and getting their full buy-in.

“It’s almost like we’re starting from scratch, looking at the very basics of sustainability like bringing a reusable coffee mug and things like that,” she says. “When we first brought the mission to InstaFund the cyclists on the team were not there for it either. I’ve been through this before and learned a lot through the process and I’m hoping that this time around, by doing things slightly differently, they’ll be more natural buy-in over the course of the season.

“We need the athletes actually bought into the Impact League rather than just thinking of it as a box they need to check. We want them to be excited to be contributing to the projects on the innovation side and, hopefully, coming up with ideas on how to reduce our impact as a team.”

Bertold has a number of plans to get her fellow sailors “out of their comfort zones” and doing just as well in the Impact League as the primary competition. Ahead of the next race event in Chicago (18/19 June), the team will be taking part in a “hands-on” circular economy workshop, while Bertold will be encouraging her teammates to totally ditch single-use plastic.

The aim is to add sustainability to the “critical path” the athletes have to take to achieve success, and to make it as seamless as possible, Bertold suggests.

“With InstaFund, we’re setting every rider up with a single-use plastic-free kit for travel, and you receive that plus a duplicate kit when you join the team. You’ve just got to set athletes up for success as best you can.”

Once the basics are in place, the Olympian has been formulating some ambitious plans with Ocean Wise as they eye Impact League success. She enthuses about the organisation’s innovation lab, sustainable seafood programme and educational initiative (Ocean Wise is the second largest educator of students in Canada behind the state school system), and is focused on collaborating on a large-scale restoration project with them.