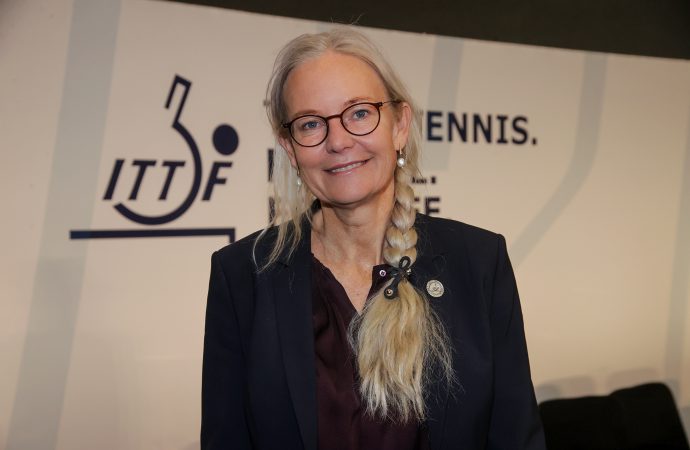 When The Sustainability Report sits down with Petra Sörling, the newly-elected president of the International Table Tennis Federation (ITTF), a few weeks into tenure, she offers us a friendly warning.

“I will not give a perfect (sustainability) plan today,” she smiles. “But I hope that in one year we can see some results of a systematic way of working that I hope we can start on.”

As the incoming president, Sörling will have many competing priorities. Her overall ambition is to “secure table tennis’ position as one of the world’s leading sports”. Sustainability, however, is a non-negotiable for the former chair of the Swedish Table Tennis Association.

Indeed, it was one of four key pillars – alongside governance, growth, and ITTF Family – on which Sörling built her presidential campaign. In the immediate aftermath of her election at the ITTF Annual General Meeting in Houston, Texas, last month, she stressed that the organisation “must make it its mission to focus its efforts towards three key areas: people, planet and prosperity.”

While ITTF’s social sustainability credentials are among the strongest in the Olympic Movement, with its Foundation that runs programmes around inclusion, health and diplomacy, Sörling is keen to see that matched by a concerted push towards environmental sustainability.

However, in that regard Sörling paints the picture of an organisation at a standing start. When the ITTF Sustainability Working Group was established in 2019, there was “no fight in the executive committee” to take on the chair role.

“I was more or less the only one who was interested,” she explains, adding that some individuals might have even perceived her enthusiasm for the leadership role in the working group as “political pre-campaigning”.

And despite the pandemic occurring just after the group’s formation (the ITTF Sustainability Working Group still hasn’t been able to meet in person), Sörling says that they have carved out a mission, vision, and even a motto: “Table tennis. For all. For life. Forever.”

Now in the role of president, the experienced sports administrator will begin to put those commitments into action. The first port of call is exploring the adoption of the UNFCCC Sports for Climate Action Framework, which evolved at COP26 last November in response to the increasing severity of the climate crisis.

As well as adhering to the five framework principles (undertaking systematic to promote greater environmental responsibility, reduce overall climate impact, educate for climate action, promote sustainable and responsible consumption, and advocate for climate action), signatories are expected to commit to net zero by 2040 as well as reduce emissions by 50% against a representative baseline.

Sörling has identified a number of areas in which the ITTF can practically adopt the framework, notably around travel and equipment. With tournaments all around the world on an annual basis, air travel is potentially where a significant proportion of the organisation’s emissions come from. During the pandemic, events were clustered in close proximity to reduce health risks. Sörling believes there may be a precedent to do similar to reduce environmental risks.

The ITTF’s decision to ban speed glue for rackets in 2008 for health reasons could also act as the blueprint for assessing the environmental sustainability of products and equipment being used. Sörling explains that the ITTF’s head of equipment (who is part of the Sustainability Working Group) regularly liaises with the Equipment Committee and the federation’s suppliers, and have already started work on how to make environmental protection a priority on all levels.

“I think this is the way to do it,” Sörling tells The Sustainability Report. “To work through the channels we already have in place. Not to create new groups and new environments because that will only take a longer time.”

Most of all though, educating and advocating for climate action is “very high” on her agenda. The sweet spot for engaging young people is between the ages of 7-11 years old, and Sörling hopes that some will be persuaded to get involved because “table tennis is a sustainable sport.”

Becoming more sustainable is not necessarily about growing the sport, Sörling suggests, but “keeping it valid” in the future.

Athletes, of course, will be crucial in showcasing this approach to the public. Competitors, such as Sarah Hanffou, the French-Cameroonian table tennis player, can use their experience to help the organisation make the changes it intends, and the platform to bring fans and other stakeholders along the journey.

Hanffou, a long-time sustainability advocate, is working on projects to send unwanted table tennis equipment to developing countries and provide opportunities for carpenters in Africa to build table tennis tables instead of importing from abroad, tying social and environmental sustainability closely together.

“It’s of course very, very important to work closely together with our athletes, but we believe our athletes will like this because it’s also a way to be a modern sport and to take responsibility,” Sörling says.

The ITTF Sustainability Working Group is currently looking into the possibility of certifying suppliers or sponsors so that athletes can make informed decisions based on social and environmental criteria, but the project is in a “very early stage”.

Although her presidency is in its infancy, Sörling has high ambition. So what would she like to say the ITTF has achieved in sustainability if we were to sit down again a year later?

“I would like us to work more professionally in this area,” she says without hesitation. “My goal is that it should be on everyone’s agenda; it should be part of every decision that we take.

“I hope that we have signed the UN declaration (UNFCCC Framework) and that we can be a voice in this movement within the IOC, so that table tennis is seen as an active part – not that we have solved everything, but at least that we have taken a clear step forward.”