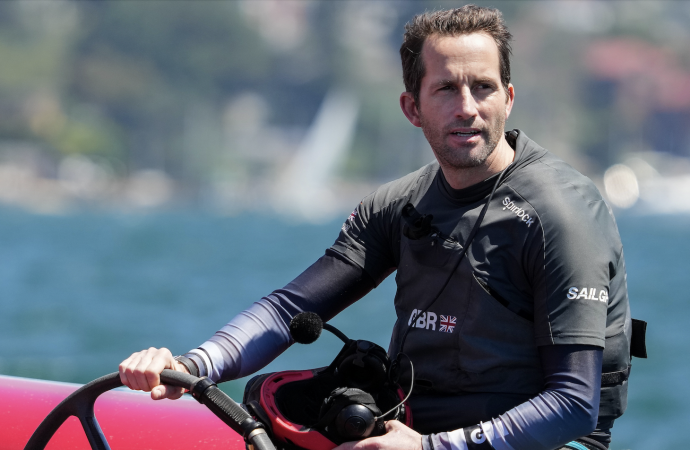 Competition and collaboration. Two concepts that are in total opposition to each other; particularly in business and in sport.

But that perception is gradually eroding, with boundary lines being redrawn (or erased altogether) all the time. Take climate change, for example: organisations that are traditionally competitors are being asked to work together to take on a common enemy. To collaborate while remaining competitive.

Fledgling brands and startups have an advantage in this space. Generally, they’re better equipped to be nimble, creative and daring enough to challenge the status quo, while the large multinationals – with their complex structures and bureaucracy – struggle to adapt to changing circumstances.

SailGP is proving to be a good example of this in the sports business.

The challenger brand, established by Larry Elisson and Sir Russell Coutts, has made climate action and purpose core principles, encouraging competition and collaboration through its Impact League – a secondary competition in which teams win points for reducing their carbon footprint, accelerating inclusivity in sailing, and working together to find solutions.

According to Sir Ben Ainslie, who became a high-profile addition to the SailGP roster when he signed up to skipper the Great Britain team at the start of the current (second) season, that philosophy is helping to make the series a breeding ground for sustainable innovation that might have been stifled in an environment where competition and collaboration are kept at arm’s length.

Ainslie highlights an example to support his point: to limit the carbon emissions generated by chase boats (powered by diesel fuel), the teams collectively agreed that instead of forcing the boats to chase after them during the course of the race, they would be kept in the middle of the course with the “nature-powered” catamarans sailing around them.

“Unless everyone is like-minded it just wouldn’t happen,” Ainslie tells The Sustainability Report. “The collaboration is the biggest secret to the success of the Impact League and where SailGP is going in general.”

With two races to go, the Great Britain team is still in contention for both the SailGP season two crown and winning the Impact League (the team is currently in second place for the latter). For the sailors, does the Impact League mean as much as the primary competition?

“The racing on the water is competitively the most important thing, but I’d say the Impact League is not far behind it now in terms of some of the discussions we have,” Ainslie laughs. “From our team’s perspective, it’s something we’re driving hard at and there are initiatives we want to bring into next season that we hope will take our team and league up another level.”

As far as SailGP goes, it’s a level that is already some way above many of its contemporaries in the sports industry.

The competition’s objective of reducing its carbon footprint by 55% and achieving net zero by 2025 has been supported by a number of initiatives. In Sydney, where the penultimate set of races will commence this weekend, generators are being powered by biofuel.

More widely, the batteries used to power SailGP’s trademark F50 catamarans are charged using solar panels and powerwalls developed by Tesla. Eleven of the league’s support boats have been transitioned to ePropulsion motors, while a focus on remote production has brought SailGP’s carbon footprint down by 85,000 metric tonnes.

Through a combination of on-water excitement and proactive approach to climate solutions, Ainslie saw enough to make him want to become the first third-party investor in a SailGP team – a model that the league wants to accelerate going forward.

“It’s becoming clearer and clearer as time goes by what the challenges are, but it’s about finding solutions,” he says. “That’s what I like about SailGP – highlighting solutions rather than saying ‘there’s a problem’. And there’s a bit too much of that if I’m being honest about climate change in recent times.”

Ainslie adds: “There’s a fine line to tread because it’s got to be credible. You can’t go into the kind of approach SailGP has taken, trying to be the first climate positive sport, without it stacking up because people will see through it pretty clearly if it doesn’t. Authenticity is absolutely key.”

If SailGP’s authenticity continues to shine through, the “commercial side will take care of itself”, suggests Ainslie, one of the most decorated Olympic sailors in history. Brands recognising more stringent ESG requirements and detecting the growing mood around climate change and sustainability from consumers will want to “link up” with sports like SailGP.

But when it comes to partners, much criticism was directed towards Ainslie in 2018 when he joined forces with Ineos, a global petrochemical company, to strengthen his pursuit of the America’s Cup. This was particularly heightened as his team, previously known as Land Rover BAR, was widely recognised as a pillar of sustainability in sport, achieving the ISO 20121 sustainable event standard before almost everyone else in the sector.

Ainslie acknowledges that the criticism was “inevitable” and “understandable”. But aside from having a better crack at one of sailing’s top prizes with the investment (Ineos pledged £110m to the team when the partnership was first announced), Ainslie explains that motivation for the partnership came from a desire to help Ineos adopt more sustainable practices.

“I think how we saw it, and we’re clearly not trying to hide from the fact that they’re funding was significant for us in our goal to try and win the America’s Cup, is we saw it as a challenge to clearly get to the bottom of what issues there are in that sector and to try to help make a difference,” he says.

“Our approach and our relationship with Ineos is to work with them from the inside and try to find a solution. And the fact that they are a private company gives us much more scope and makes them more able to make those critical decisions.

“I was at a conference with Jim Ratcliffe (founder and chairman of Ineos) not so long ago where he was talking about their performance as a business, and his closing summary was ‘we need to be the best in the sustainability sector against our competition – we need to step up’. To hear somebody like that, with the influence he has, stand up and say that, for me it was a bit of a groundbreaking moment. The partnership is working.”

Indeed, one of the major areas the Great Britain team wants to make headway with season three’s Impact League is through the continued development of biofuels and hydrogen fuels with the support of Ineos, where “there are some massive gains to be made”.

On top of that, Ainslie is keen to see the STEM Crew initiative, an educational platform for kids developed by charitable partner 1851 Trust, grow beyond the UK and around the SailGP host locations. More than half of the secondary schools in the UK have been using the STEM Crew online resource, which “inspires youngsters” to gain the skills needed to “be part of the solution” to issues like climate change.

From next season, SailGP as a competition will require all host cities to agree on shared sustainable development objectives, increasing the probability of an even greater positive impact going forward. And while the competition is riding on the crest of its unique purpose, Ainslie would like to see other sports infuse sustainability into competition in a similar way.

“I think the Impact League is a fantastic initiative and I’d like to see it implemented in a lot of other sports, frankly,” he says. “But it depends greatly on how the sport is managed. With all these things, it can be quite daunting with people looking at it and saying ‘how do we even start?’ In reality, some of it is not that hard – it just takes a bit of determination and willpower.

“I’ve been really impressed with the collaboration between teams. It just becomes a natural fit and everyone’s excited about the difference they’re making. It was almost a bit of an experiment with SailGP, but everyone involved would say it has been a huge success. We’re massively inspired by it and really want to keep pushing it forward.”