50 actions with 50 partners: Inside the first year of Forever Green 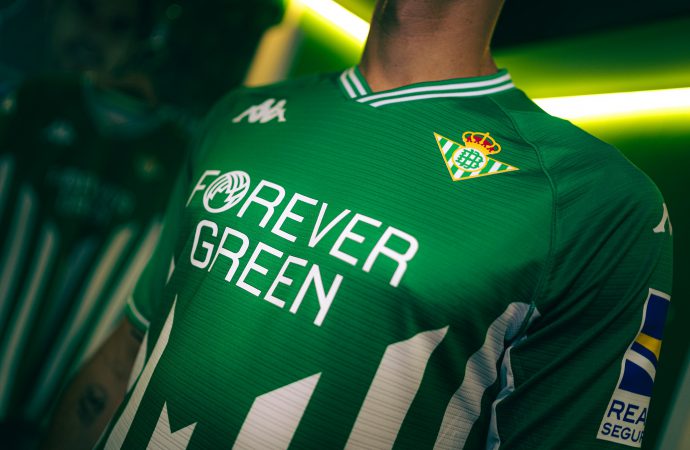 Real Betis’ sustainability platform has achieved a number of milestones over the past 12 months, culminating in a presentation at the COP26 climate change summit

It has been an important 12 months in the 115-year history of Real Betis, the Spanish La Liga team globally recognised for its distinctive green and white stripes and passionate fanbase.

In May, the Seville-based club secured its best top-flight points tally for more than 10 years to round off a successful 2020/21 campaign. This current season, 2021/22, has also started off well with the team in fifth position and some memorable results along the way, including a remarkable turnaround against Celtic in the UEFA Europa League, coming from 2-0 down to win 4-3.

But while the players have been impressing on the pitch, the club has been aligning its philosophy to the colour of its shirt and making sustainability a key priority for all those involved with Real Betis.

During October 2021, the club celebrated the first anniversary of the launch of its Forever Green initiative – an open platform for partners who “want to show the world what they are doing for the planet” and to “mobilise citizens and society” around climate action with football as the key driver.

A month after its first birthday, Real Betis was invited to showcase the values, objectives and success of the Forever Green platform at the COP26 climate change conference in Glasgow.

Rafael Muela Pastor (below right), the general manager of the Real Betis Foundation, told delegates that Forever Green was born out of the “deepest conviction” to support people to “fight against the problems and emergencies we all face together”.

“As a club we have been around for 100 years, and we are there because of the people,” he explained.

Real Betis’ Forever Green commitments can be broken down into five main areas – recycling, mobility, climate change, nature, and being a sustainable club – in which all 50 actions can be placed.

In Glasgow, talk of climate action was the priority. While Muela was presenting Forever Green, world leaders and diplomats were in another part of the venue negotiating a route through to net zero carbon emissions by 2050 – the goal we collectively need to achieve to limit global warming to 1.5°c and avoid the worst of climate change.

As part of its climate change commitments, Real Betis has gone one better than that and announced the ambition to go net zero by 2040, 10 years ahead of the Paris Climate Agreement goals, as part of The Climate Pledge campaign established by Amazon and Global Optimism, founded by former UNFCCC executive secretary Christiana Figueres.

Supported by local startup Ecoterrae, the club has measured its carbon footprint for the last three seasons, including the transportation of employees and players. The result of this carbon audit will be registered in Spain’s Ministry of Ecological Transition.

Indeed, facilitating the use of sustainable mobility is going to be crucial for Real Betis to make the carbon reductions needed to hit that net zero target. Muela highlighted Betis’ partnerships in this area, including with Lime, a micromobility provider with which it extended its agreement in April.

Lime has provided Real Betis employees with e-scooters (below) for their commute to reduce a reliance on car journeys. In April, when the partnership extension was announced, the organisations revealed that within the first four month the scooters had saved 4,200 car trips, adding up to 280kg of CO2e emissions.

Internal and external campaigns have been launched by the club to accelerate recycling, with lots of emphasis put on educating youth teams to instill good habits within the young people associated with the clubs. Agreements with Ecolec Foundation, which concerns itself with the proper recycling of electronic waste, and responsible consumption education platform, Ecólatras, have supported efforts in this area.

Practically all of the Forever Green actions involve fostering a community around a particular cause. This applies to Real Betis’ focus on protecting the natural environment. Green volunteers have been recruited to help clean the local Guadalquivir river and the paths alongside it.

An urban orchard has been cultivated in deprived areas of Seville so that people have access to free, sustainable and nutritious food, and reforestation projects have been funded in the city, Spain, and abroad.

But the area in which Muela was keen to demonstrate clearly was the fact that, within almost all of its operations, Real Betis is trying to showcase the blueprint for what a sustainable football club should be.

“If we are going to spread this message we need to do that first internally,” he said. “We are really committed to that.”

The club has established an interdisciplinary Sustainability Committee, in which colleagues from across departments – including facilities, marketing, communications, procurement – meet regularly to coordinate efforts and come up with new plans.

As part of its strategy to grow its influence in this area, Real Betis has created an “eco-criteria” for suppliers, so that organisations providing products and services to the club are abiding by environmental and human rights criteria in line with international standards.

The development of a new training complex is on the horizon for the two-time Copa del Rey winners, and Muela wants it to become “the most sustainable football complex in the world”.

And the club’s green influence has broken national borders, with news of its sustainability work reaching 50 nations. In one of those countries, Mexico, first division football team Abejas de León has joined Forever Green alongside other sports entities, such as the National Futsal League and Spanish La Liga (Forever Green was officially presented at the league’s headquarters in the presence of president Javier Tebas).

Year one is complete, and Forever Green’s numerous actions caught the attention of a large proportion of people around the world, with over one billion impressions online alone. But Muela stressed that the work is just beginning, and that the next chapter of Forever Green is to instill hope and to mobilise more people and organisations to take climate action.

“We want to spark and we want to tell people it’s possible to do something. We want Forever Green to represent Real Betis, to represent all our supporters, and all those who are worried and concerned for the climate.”