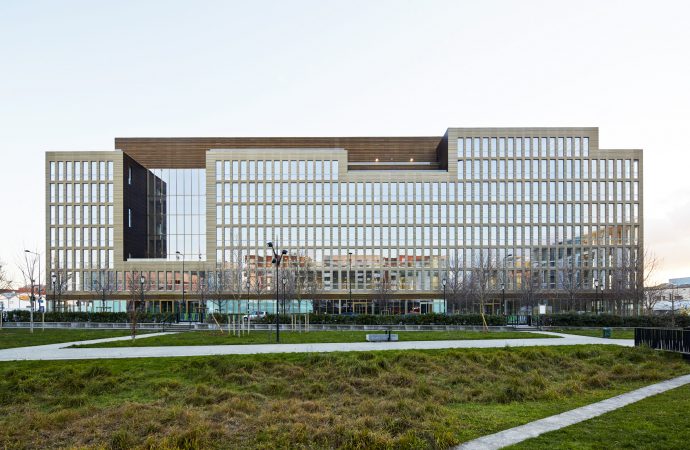 Workplace design, and its influence on company culture and employee happiness, was a topic of increasing importance pre-Covid, and is likely to become even more prominent in a post-pandemic world where human health, connection and social responsibility will be prioritised by many organisations.

A workplace is no longer just a functional space where employees come to complete tasks during a certain window of time each day; what your workplace looks like (and feels like) says a lot about what your organisation is – what it stands for, what it believes in, what it wants to achieve.

When your company represents something unfathomably high profile, such as the Olympic and Paralympic Games for example, company culture is potentially even more important, even though, typically, an organising committee will be around for less than a decade.

One of the missions of the Paris 2024 organising committee is to host the “first-ever carbon neutral Games” that will accelerate sustainable innovation and development in France and beyond. And its new HQ – just a stone’s throw away from the Stade de France (a key venue for the Games) – has been designed to reflect that.

A few top-line characteristics about Paris 2024’s ‘Pulse’ HQ: the rented building is already carbon neutral-certified and has 300sq m of solar panels on its roof. There will be more parking spaces for bicycles (375) than cars (300). Pretty much all furniture has been sourced using circular economy principles. And the building will be a zero food waste, zero single-use plastic zone.

But these numbers don’t tell the full story. Every impressive headline objective or success has been achieved through careful planning, iteration, negotiation and collaboration with partners. Creating a workspace that is environmentally sound and inclusive, as well as practical and functional, is not merely about crafting a vision and pushing towards it (although this is important). It’s about knitting together an intricate patchwork that motivates employees, helps to achieve organisational objectives, and satisfies other important stakeholders.

Georgina Grenon, Paris 2024’s director of environmental excellence, is the person who has been piecing this vision together – all in the midst of a global pandemic that has hit France (and particularly Paris) hard.

While many offices and workplace buildings have implemented elements of environmental stewardship and social care, Grenon explains that Pulse brings everything together in a holistic fashion that ties the Games’ ambitious sustainability objectives to a physical, tangible space.

According to Grenon, at the heart of it all is a procurement strategy that moves environmental and social considerations away from the periphery and towards the centre. All Games suppliers must adhere to certain environmental and social targets if they want to win tenders. A significant proportion of contracts will go to social businesses (or consortiums including a social business), carbon emissions will be accounted for in the same way as monetary budgets, and those suppliers prioritising the employment of the local disadvantaged or unemployed will be viewed favourably.

“The procurement strategy is really the cornerstone of getting things done,” Grenon tells The Sustainability Report. “We’re approaching this like an athlete would approach sport; we’re not aiming for bronze, we’re aiming for gold. And gold is addressing all of our social and environmental objectives.”

There are five key pillars that the development of the Pulse HQ has been built around: circular economy, carbon reduction and environmental protection, inclusion, social innovation and local value creation.

And while some of the objectives will be achieved through contract requirements (all product suppliers had to propose how the items would be reused once the Games are concluded in order to win a tender, for example), many of the big wins were achieved through a more nuanced, partnership-oriented focus.

Instead, Coca-Cola will provide drink dispensers to fill glasses or reusable bottles, and will even provide all members of Paris 2024 staff with a metallic, reusable bottle with the logo of both the Paris 2024 Games and Coca-Cola’s Smart Water brand.

The soft drinks giant’s director of communications for France, Laurent Turpault, tells The Sustainability Report that the Pulse HQ was a perfect “R&D centre” to test the model before exploring its wider merits. Ten smart dispensers have been installed across the building. Many offer water options only (natural, with gas, or flavoured), but the units located close to and inside the restaurant offer 60 different beverages to Paris 2024 staff.

“Coca-Cola and the Olympic Games have been partners for almost a century, and each time the partnership has evolved to make sure there’s a lasting legacy,” says Turpault. “And for Paris 2024, sustainability is a top priority.

“We started work with the Paris 2024 team a little over a year ago, and discussed their ambition to reduce carbon emissions and be a carbon neutral Games. One of our largest sources of emissions comes from our packaging, and we decided very quickly to work on that part. We think the Games is a very strong platform to test new things and push innovation so it becomes more widespread in the future.”

Coca-Cola will monitor the success of the initiative over the next four years, but Turpault acknowledges that this doesn’t signal a complete move away from plastic, glass and aluminium packaging. According to Turpault, 100% recyclable plastic bottles have the lowest carbon impact of all the options, and the company would persevere with its Zero Waste World 2030 objective of having 100% of its packaging recyclable by 2030 and 100% waste collection in Western Europe by 2025 (2024 in France in time for the Games).

He adds that Coca-Cola will continue to explore options to contribute to Paris 2024’s ‘Zero Waste Games’  goal, and develop activations around diversity and inclusion, which is a “big strategic objective” of the company.

Circular economy principles extend to the food produced in the restaurant, and even the office furniture and fittings. Carpets installed were taken from a closeby building that was being demolished, directing the item away from landfill, removing the need to create a new one from virgin materials, and saving the organising committee money in the process.

In terms of food, all produce (80% of which will be fresh and local) that is not sold during the lunch hour will be offered at a discounted price for employees who want to take some home for dinner. Everything else left over that can be consumed will be given to associations, and organic waste will be transformed into biogas.

The entire cycle of energy for the building will be covered by the electricity generated by the solar panels on the roof and renewable energy from a French wind farm supplied by EDF, as well as the French biogas.

“Supply of 100% renewables is a key part of our partnership with EDF, and we wanted renewables from France as a means to support local production and to know where the energy is coming from,” Grenon explains. “We didn’t want to just buy credits, so EDF developed a system allowing them to trace the electrons from a wind farm in Normandy to us. Whatever we’re consuming, they’re injecting that amount of electricity from the wind farm into the grid.”

Indeed, 40% of the 5 GWh (gigawatt hours) per year generated by the five turbines at the Clitourps wind farm in Northern France will be dedicated for the Pulse HQ. In keeping with the spirit of driving innovation, blockchain technology will be employed by EDF to ensure the building gets its full allocation of electricity from the site.

Grenon and the Paris 2024 Energy Team will have oversight of this energy via a web platform in which they will be able to see the ‘Guarantees of Origin’ and blockchain certificates, visualised by graphics and reports.

“We wanted to go beyond our renewable energy commitments, in line with Paris 2024’s commitment to sustainability and innovation,” Gaëlle Salaün, French commerce director for EDF, explains. “This contract is just the beginning of the story between EDF and Paris 2024. We’re working together on several projects over the coming months.”

It took around two years for Grenon and her team to put all of these pieces together for Pulse. For the Paris 2024’s director of environmental excellence it was worth it – not just because the building reflects the philosophy of Games, but because it has helped important partners of the organising committee take a big step forward towards the low-carbon transition.

“This is sending a lot of very strong signals to the market – to our sponsors, to everyone around us – that this is the way we want to do it,” she says. “We’re proving that you can make a difference on every level, and it doesn’t cost a fortune. In fact, we’ve even made a lot of savings by making smart choices.”