Enhancing the fan experience through sustainability 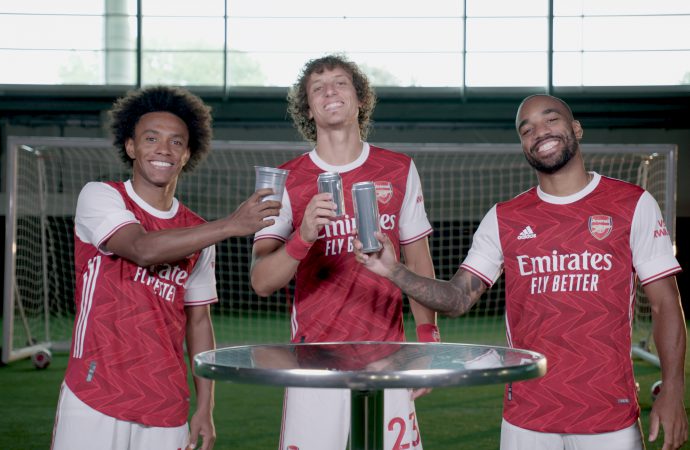 Getting fans interested in sustainability through sport seems like a no-brainer in theory, but in practice it can be a thin line to walk. Fans coming to a game don’t necessarily want to be lectured about environmental stewardship, instead wishing to spend the afternoon or evening losing themselves in the thrill of sport, away from the realities of everyday life.

Other fans that consider themselves more environmentally conscious will be keen to find out if their team’s sustainability project is making a genuine impact, with nagging concerns in the back of their mind that it could be a PR stunt dressed up as environmentalism.

The metal packaging giant has just established a landmark partnership with Kroenke Sports & Entertainment in which it will support the company’s three venues in Denver, Los Angeles and London transition away from single-use plastic cups by providing recyclable aluminium alternatives. The SoFi Stadium in LA (home of NFL team, the LA Rams), The Emirates Stadium (Arsenal Football Club) and the home of the Denver Nuggets (NBA), Colorado Avalanche (NHL), and Colorado Mammoth (NLL) will start providing the cups as fans begin to make their way back into sports venues.

Indeed, the latter venue will be renamed the Ball Arena as part of the partnership, and Pitre is confident that the high-profile nature of the deal and the ease in which spectators can recycle their cups can lead to substantial behaviour change.

“People want to go to these venues to have fun and cheer their team on. The trick of all this is knowing how we bring sustainability values together in the right context, meeting the right people, in the right place with the right mood,” Pitre tells The Sustainability Report.

“We saw an opportunity, and Kroenke really saw it the same way, that we’ll be able to activate a sustainability partnership in a way that will feel really natural and fun. It won’t be a distraction and detract from the fun of attending an event at the Ball Arena or The SoFi Stadium or The Emirates Stadium.”

The aluminium cup was tested during several sports events in the US over the last year, including the Super Bowl LIV in Miami, and Ball carried out research to gauge fan reaction. According to Pitre, fans suggested that the cup was a “better overall experience”, representing a sturdier unit than single-use plastic cups, and doing a better job keeping beverages colder.

Recycling the cups can also be turned into a “gamification experience”, she adds, with ideas being discussed in which fans can vote for the MVP of the game or favourite player by placing their cups in recycling bins labelled with the player’s name.

“The value proposition to consumers is a huge part of sustainability now,” Pitre explains. “Kroenke are experts at doing these kinds of fan engagement and fun promotions, and to have the opportunity to place sustainability and recycling as part of that everyday fun experience is really what we’re excited about happening.”

But although fan engagement is a huge piece of the puzzle, Pitre stresses that a move towards recyclable aluminium cups will make a genuinely positive impact in terms of environmental protection. Aluminium, states Ball, can be recycled an infinite amount of times. And whereas the amount of plastic that has actually been recycled is negligible compared to the amount ending up in landfill and in the oceans, around 75% of aluminium that has ever been produced is still in use today. In fact, Ball has stated that, in many cases, cups that are being recycled can become functional units again within 60 days.

Within each of the partner venues, Ball will help to develop a bespoke sustainability programme. In the newly-named Ball Arena in Denver, Ball has been appointed as its Official Sustainability Partner. As part of that work, Ball and Kroenke Sports & Entertainment will work towards transitioning to 100% infinitely recyclable aluminium to replace other cans, bottles and cups. A complementary recycling plan, in which the partners will work together to achieve a 100% recycling rate, has also been put in place.

As sports and entertainment venues move away from single-use plastic they will be faced with a handful of more sustainable options, including the recyclable aluminium cups developed by Ball and reusable plastic cups being implemented in other facilities.

“The thing we really like about the aluminium cup – and that a lot of venues really like – is that it fits really seamlessly into how they’re operating already,” Pitre explains. “They should have recycling already implemented, and if anything this brings an easily-sortable, high-value recyclable material into their system without having to make large-scale changes.

“Anytime you’re trying to drive sustainability you’ll have those naysayers who say ‘no, that’s too much change’, ‘it’s too expensive’, or ‘it’s too this or that’. But the aluminium cup really fits well into how many stadiums and venues are already operating today, so that’s a huge benefit.”

Ball Corporation’s branding on the venue formerly known as the Pepsi Center is the second high-profile sustainability-oriented naming rights deal in the US in 2020. Earlier in the year, Amazon acquired the naming rights of the venue that will be occupied by new NHL franchise Seattle Kraken, and called it the Climate Pledge Arena after the global movement of organisations pledging to reach the goals of the Paris Agreement 10 years early (achieving climate neutrality by 2040).

The company had been working with Kroenke Sports & Entertainment for around five years on community based partnerships before agreeing the aluminium cups project, and although Pitre stresses that Ball is not the type of company to go into a “pure sponsorship” agreement, the enthusiasm of its partner, the feedback received during the Super Bowl, and the opportunity to showcase the sustainability credentials of aluminium in a “cool and fun way” to a potentially large audience gave the firm all the encouragement it needed to go ahead.

In addition, the three venues in which Ball will have a presence connects the brand with the biggest sports leagues in the world – the NFL, the NBA, the NHL and Premier League football – watched by millions of people worldwide.

“Sports and entertainment is where culture comes together and is expressed,” Pitre says. “And as sustainability becomes more attached to the value of consumers, I think it’s a great way for companies to show their values and engage with fans.”

A promotional video to announce the partnership was launched, featuring a handful of well-known athletes from each franchise – including Jamal Murray (Denver Nuggets), Alexandre Lacazette (Arsenal) and Gabriel Landeskog (Colorado Avalanche) – describing the benefits of the cup. Getting players involved in future activations, says Pitre, has been earmarked as a way to make the fan engagement aspect even stronger.

“They are the best way to connect with fans, right? If I go to the Ball Arena, I’m personally going to see Jamal Murray, to watch him play. I want to hear what he says. I want to follow his Instagram, and so the extent to which the athletes can convey the message in particular will be part of the in-stadium activation. It will make recycling part of the overall experience.”