‘Covid has exposed the cracks in sports ecosystem’ 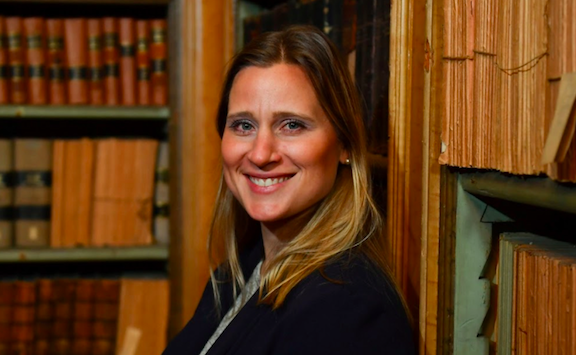 Angela Ruggiero loves sport. At the same time, she’s frustrated by sport because, as a sector, it’s often late to the table when it comes to innovative thinking and technology. Sport in general, she says, is not reinventing itself sufficiently to appeal to a new generation of “fickle” fans who crave more than the traditional offering.

“Why do we expect athletes to be better versions of themselves every single day, and we give them all the tools and data to do that, but then on the business side it becomes ‘I know a guy who knows a guy’ and ‘we’ve been doing it like that forever’. It’s like two different worlds,” Ruggiero tells The Sustainability Report.

Ruggiero has seen it from both sides. As an ice hockey defenseman, she represented the US with distinction, playing for her home nation more times than any other male or female hockey player and winning an Olympic gold medal in 1998.

Since then, the four-time Olympian has dipped her toe in the administrative side of the industry, joining the International Olympic Committee’s Digital and Technology Commission, Nominations Commission and Ethics Commission, as well as taking up a board position with World Rugby.

But Ruggiero has purposefully positioned herself as sport’s forward-thinking and critical friend through the creation of Sports Innovation Lab, an applied market research firm for the sports industry, that she established alongside co-founder Josh Walker.

Through this vehicle, Ruggiero uses data to paint a picture of what sport could be doing better – which is more urgent today than it has ever been before. Covid-19, Ruggiero explains, has “exposed the cracks in sport’s ecosystem” more than any other event. And those cracks are significant.

Sport’s main challenge is engaging with what Sports Innovation Lab terms “fluid fans” – a growing proportion of people who are open to change, empowered to choose and continuously evolving. This change in fan characteristics is forcing sport to rethink the way it approaches fan engagement. While local or even global fans could be reached through traditional methods and messages, fluid fans increasingly want more.

According to a report published by the Boston-based firm in 2019, sports entities have to rip up the rulebook and start to focus on fan behaviours and preferences. Fluid fans, Ruggiero says, care about a wider purpose. They follow players more than teams. And they want to be entertained beyond the constraints of the field of play.

To achieve this, sports teams have to design for behaviours, not engagement, invest in enabling technology that meets these fans where they’re at, and embrace agility and innovation. But evidence that sport is putting these principles into practice is scarce. Ruggiero explains that slow progress on this front persuaded her to launch Sports Innovation Lab in 2016 to drive it forward.

“When I was still playing, I liked the idea that data could help me become a better version of myself, and understanding myself as an athlete was my goal every day,” she says. “After I retired I studied an MBA at Harvard in disruptive innovation under the master, Clayton Christensen, and instantly knew this is what the sport industry needed.

“In parallel, I began to work with the IOC and US Olympic Committee, getting unbelievable exposure to global sport, a realising that the industry has been doing the same thing for decades. Literally nothing had changed. There were tweaks around the edges but there was no disruptive innovation – no real change.”

Sports Innovation Lab fulfils a couple of roles as it strives to move the needle on this: it helps sports leaders, tech providers and brands “synthesise data” and meet each other to collaborate on innovation projects. It hosts strategic workshops for sports organisations that want to “reset” or explore a particular problem. And it creates insightful content, such as its investigation into the preferences of fluid fans and the strategic benefits of having a ‘smart stadium’, that demonstrates “where our heads are at”.

The warning signs for sport are encapsulated by the fact that broadcasters like ESPN are seeing subscriptions decline. It’s widely expected that sports rights, that have increased year-on-year for many years, have peaked and will come down. And all the major American sports leagues – NFL, MLB, NHL and NBA – have seen total fan attendance decline between 2008 and 2018.

Covid-19 has obviously intensified the challenge and, as a consequence, made strong leadership critical for sports properties staring at huge gaps in their budget and a business model that has been found desperately wanting.

“The pandemic, unfortunately, is the wrecking ball that has opened people’s eyes, but as a result I really believe the industry will be better and forced to rethink everything,” Ruggiero acknowledges. “Unfortunately you’ll have some companies who retreat, cut their expenses, and wait for the economy to rebound.

“They have to take risks at this point. They have to invest in new things. Change has to occur right now and it’s probably one of the hardest times ever to be a leader. But there’s a great opportunity for leaders and organisations.”

To take advantage of the emerging opportunity, sports clubs, leagues and federations have to use data and the emerging circumstances to guide their decisions. In terms of fan engagement, the first thing that’s clear is that spectators, in general terms, will not be back inside stadiums and arenas in the same way as pre-Covid for a substantial period of time – if ever.

Secondly, this emerging generation of fluid fans is tending to follow individual athletes more so than teams or even sports. To build engagement during this period of uncertainty, Ruggiero is convinced that teams and leagues should place a heavy focus on developing the brands of their players and encourage them to create content that speaks to this audience.

“Athletes are, because of the advances in tech, given more of a platform and a voice in the overall ecosystem. If Ronaldo is traded, fans will follow him and buy his jersey. We now follow personalities and there’s an influencer market globally,” she says.

“If you look outside of sports and see what we do as consumers, we are following people now more than brands. Athletes can go direct to consumer, so teams should let them have a voice and give them the tools to reach this audience. These fans may steer away from watching a two-hour match, but they consume everything a certain athlete produces on social.”

This will lead to “tonnes of revenue-generating opportunities” – but will require investment. Ruggiero explains that as the landscape is changing, sports teams have to evolve to the point that they almost become media companies. Indeed, she suggests that properties develop their own media studios to facilitate this athlete-generated content.

Key to all this – particularly in the context of the pandemic – is sports organisations being brave enough to “protect their innovation budget” while everything else is being cut. While slashing costs may make business sense in the short-term, removing money that takes the brand forward will, in Ruggiero’s view, have a serious impact on the team or league being relevant in just a few years time.

“The industry is now understanding the need for innovation and wrapping its heads around technology,” she says. “The leaders will realise this is the time for partnerships, to invest in technology so fans can safely return or, in the meantime, consume their product in any way the fans want.”