‘Competition is a natural way to get sustainability into sport’ 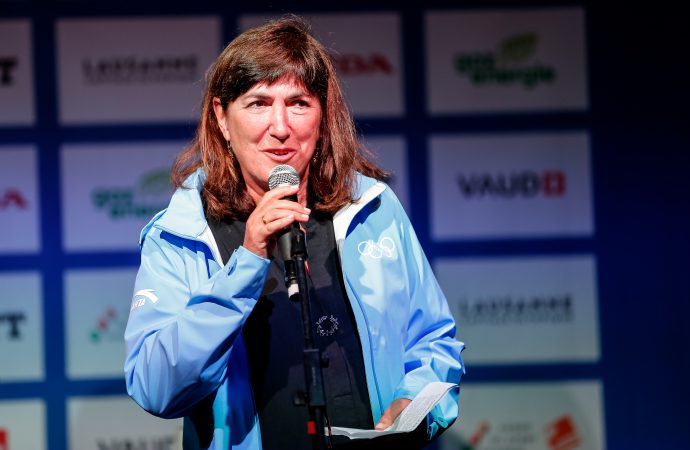 Marisol Casado, president of the International Triathlon Union, explains how certification and guidelines will help the sport reduce its negative environmental impact and thrive

The 136th, and latest, International Olympic Committee Session was notable for a couple of reasons. It was the first ever to be held by videoconference (due to the limitations created by the evolving Covid-19 situation), and, for the first time in its history, the organisation elected a female vice-president, the American bronze medal-winning rower Anita DeFrantz.

On one hand, it’s astonishing that it’s taken so long for this milestone to be achieved. On the other, it demonstrates progress and another barrier (eventually) broken down for women working in the sports industry.

Indeed, gender equality was one of the key themes of the Session; of the five new Members welcomed by the IOC in its latest intake, three were female (Kolinda Grabar-Kitarović, the Croatian president; Princess Reema Bandar Al-Saud of Saudi Arabia; and Maria de la Caridad Colón Ruenes of Cuba).

Now, of the 104 IOC Members, 37.5% are female compared to 21.3% in 2013. Almost half (47%) of the representatives in IOC Commissions – which focus on specific topics, such as finance, solidarity, discipline and sustainability – are women.

Marisol Casado was the chair of the IOC Gender Equality Review Project from which much of this progress stemmed. But as the president of the International Triathlon Union, Casado is still one of the few female leaders in the Olympic Movement.

Most damningly, of 10 indicators demonstrating the integrity of international federations, the one with the lowest mean score was ‘appropriate gender balance in Executive Board of equivalent’.

But Casado is optimistic that, because of the IOC’s commitment and high-profile gender equality campaigns like #MeToo,  there will be a “big improvement” over the next five years in terms of women leadership numbers in sport.

“I’ve been working on this matter for 30 years and over the last five years we’ve seen big improvements,” Casado tells The Sustainability Report. “Even though we are not exactly at even number, what the IOC is doing will make a difference. Everyone is watching and this will facilitate a much better situation.”

The cause is also helped by the perception that female leaders of nation states have coped better with the coronavirus pandemic, Casado explains, as well as data that suggests that women make better organisational leaders than men.

In their Harvard Business Review article published last year, Jack Zenger and Joseph Folkman compared male and female leaders against 19 competencies, including initiative, resilience, relationship building, integrity, and goal setting. It was found that women were thought to be more effective than men in 84% of those capabilities. Despite this, less than 5% of Fortune 500 chief executives are female.

Casado jokes that the sample size is even smaller in sport, but adds that a complimentary viewpoint articulated by a growing number of women in sports leadership positions will make the industry undoubtedly stronger.

Although it’s not one of the larger international federations, the International Triathlon Union was referenced within the top two tiers for governance by the ASOIF report. Casado believes that the organisation’s focus on inclusion (the ITU has recently elected two active athletes to its Executive Board) is a significant contributor to this score.

However, Casado identifies areas of improvement. Environmental protection and sustainability is now one of the ITU’s priorities. Earlier this month, the body established its first set of sustainability guidelines for event organisers to reduce the negative impact of the sport.

The guidelines explain how an event can measure its carbon footprint and lays out three levels of sustainability certification that events can aim for. There are 18 ‘must have’ actions that events will need to adhere to in order to achieve the lowest level of certification. On top of that, there are 33 ‘recommended’ actions that event organisers will have to complete for the middle level of certification. And for the top level, there are an additional seven ‘aspirational’ actions.

“The certification is good because we are in sport after all and everybody wants to compete,” says Casado. “This is a very natural way to get sustainability into sport.”

The work was led by Loreen Barnett, the ITU vice-president, and Sarah Springman, who is an honorary member, a trained engineer and a member of the IOC’s Sustainability and Legacy Commission.

Many of the categories relate to the UNFCCC’s Sports for Climate Action Framework, of which the ITU is a signatory. Those signed up to the framework have committed to five principles: undertake systematic efforts to promote greater environmental responsibility; reduce overall climate impact; educate for climate action; promote sustainable and responsible consumption; and advocate for climate action through communication.

Like most sports, triathlon is being increasingly impacted by climate change and environmental degradation, but because of the nature of the sport – in which athletes compete intensively, over a long period of time, and in nature – the effects can be even more pronounced.

The ITU has been working with Tokyo 2020 to start the triathlon event early in the morning to avoid extreme heat. Casado also explains that water quality is a major issue for competing athletes, who swim for a portion of the race, with cleanliness varying from location to location. Last year, the ITU published a water quality statement to showcase the complications athletes can face when being in contact with contaminated water.

“If we don’t take care of the world we won’t have our beautiful sport anymore. It’s my duty to say that. But in reality, many people over the last few years have become very concerned and have asked us to take strong measures. We have to have a planet where it is possible to live, let alone do sport.”