“Everyone politicises climate change – it’s tough, as an athlete, to talk about it” 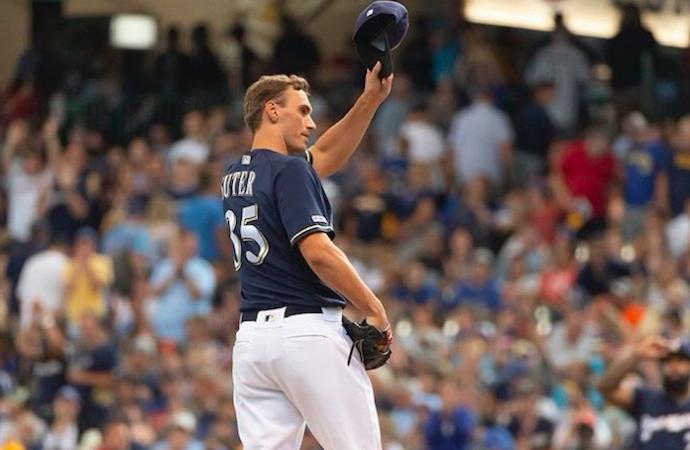 Brent Suter, the Milwaukee Brewers pitcher, discusses his version of athlete activism, and his mission to get other high-profile sports people talking about climate change

If, during lockdown, you’ve been trying to satisfy your thirst for sport via documentaries and sport-related dramas on Netflix, you might have come across ‘The English Game’. Through Downton Abbey sensibilities, the series showcases the birth of modern football (or soccer) in England, following Fergus Suter – the sport’s first professional.

The premise of the show revolves around Suter trying to lead a working-class team to FA Cup glory for the first time against a team of upper-class amateurs, who were determined to keep the sport ‘pure’ by stamping out professionalism.

To find out whether Suter’s team won the cup, you’re better off watching the series for yourself. But whether they did or didn’t, there’s no disputing that the Scotsman was a pioneer who dramatically changed the sport of football and, as a result, the course of sporting history.

More than a century later, the footballer’s part-namesake Brent Suter – a pitcher for Major League Baseball franchise, the Milwaukee Brewers – could be on the way to creating some history of his own, and carve his name out as one of the first active elite athletes to consistently use his platform to bring people together around the issue of climate change.

Most recently, Suter has become the high-profile face of a newly-established NGO, EcoAthletes, an organisation created by Green Sports Blog founder Lew Blaustein as a vehicle to get athletes involved in the climate conversation.

But Suter has been fighting the good fight since his teenage years, when Al Gore’s Inconvenient Truth opened his eyes to the climate disaster the Earth was – and still is – heading towards.

“That was 14 years ago and we still haven’t made a lot of progress, so that’s depressing,” he tells The Sustainability Report. “But it was in my heart from then on to make this a priority in my life.”

So a few years later, Suter left his home in Cincinnati, Ohio, for Massachusetts to combine his two loves: playing baseball and studying for an environmental science and policy degree at Harvard. And he has been advocating for change ever since.

While playing for the Brewers, Suter has offered his backing to a number of local climate initiatives. For EcoCity Milwaukee, the city’s Environmental Collaboration Office, Suter helped promote its programmes around renewable energy, energy efficiency, water protection, urban agriculture and sustainable infrastructure.

The left-hander has lent his support to the local Urban Ecology Center which, among other things, transforms areas of urban wasteland into vibrant natural communities, and Players for the Planet, a platform set up by former MLB player Chris Dickerson to engage pro athletes in environmental issues.

For those not necessarily engaged in climate issues, Suter’s activism may not generate the same powerful imagery associated with Muhammad Ali’s fight against the Vietnam War, or Billie Jean King’s forehand smash to gender inequality.

But instead of courting the limelight, Suter takes a pragmatic and results-focused approach to athlete activism. Instead of making barnstorming speeches that inspire and attract ire in equal measures, Suter puts his name on bills going through Congress. And, as you’d expect from his chosen college subject, he talks fluently about the politics of climate change.

During our half-hour conversation, he explains (with palpable excitement) that his name is on the Energy Innovation and Carbon Dividend Act of 2019, which proposes a fee on carbon emissions with the money generated distributed to lower-income families. In the same breath he admits that he’s not 100% on board with the heavily-debated Green New Deal – a policy package around climate change and economic inequality modelled on Franklin D. Roosevelt’s famous New Deal – because “there are some things I didn’t agree on wholeheartedly”.

“The unfortunate truth of life is the people who are marginalised are the ones affected hardest during a crisis,” Suter says, dwelling on climate change and the current coronavirus crisis. “Any way we can mitigate the pain of transformation to a clean society is a big part of what being human is about. If we can do that through policy, which America has struggled with throughout history with marginalised people, and make a much brighter future that would be great.”

His challenge now, alongside his new EcoAthletes colleagues, is to try to get other high-profile athletes engaged and involved in the same processes.

The NGO has made a promising start: since its launch just over a month ago, a handful of athletes have already come aboard. Mara Abbott, the former road racing cyclist; volleyball players Jeremy Casebeer and Luke Smith; Olympic gold-medal winning hockey player, Joie Leigh; Alena Olsen, the US women’s rugby player; and Amy Steel, a former Australian national netball player, have joined board members Suter and Alexandra Rickman, the Paralympian.

Suter’s ambition is to get that number up to “several dozen” before the organisation’s first year is out, but acknowledges the challenge – particularly in his home country.

“It will definitely be a process,” he says. “In my experience, getting guys on board straight away won’t just happen. It’s about planting a seed and letting it germinate, so to speak. A couple of months down the line I’ve gotten a couple of guys on the eco-train during my time with the Brewers.”

He adds: “It’s tough to come out and talk. Everyone politicises climate change over here.”

The US, generally, is a tough place for athletes to make a stand. While Muhammad Ali now finds his name in the pantheon of the greats, it could be argued that he was once the most hated man in America. For all the praise channelled towards Colin Kaepernick and Megan Rapinoe for taking stands against racial and gender inequality respectively, there are many who despise them and their point of view.

While Suter plies his trade in Milwaukee, Wisconsin, which, in general, is acknowledged to be on the liberal end of the scale, many of his fellow athletes compete in front of many fans who, at best, are sceptical of climate change messaging and, at worst, are hostile towards it, labelling it a hoax despite the scientific consensus.

So how does he plan to get more athletes on board?

His pitch, he explains, revolves around human health and the future of the planet – the latter of which works better when engaging athletes with children.

In terms of human health, he hopes that the changes his teammates are experiencing with regard to extreme weather – and the effect it’s having on their performances – will do the heavy lifting when trying to convince them.

Baseball, after all, is a mentally and physically demanding sport. When his role is that of a starting pitcher, Suter can throw anywhere from 80 to 100 balls per game. Each team plays 162 games per season. In extreme weather conditions, particularly increased heat, that can take its toll.

The third part of his pitch will attempt to speak to the athletes’ ego and sense of legacy, encouraging them to “be one of the first through the wall”.

“The first often get bloody and bruised, but it’s nothing compared to the positive change you can make,” says Suter.

But there’s a commitment for those wanting to be involved in EcoAthletes – this is not a branding or PR stunt. Athletes involved in the programme are expected to take part in climate courses developed as part of EcoAthletes’ education package.

The first, basic course includes a 45-minute introduction to climate change, which details the problem, presents solutions, and describes how they can use their platform to communicate both. The second involves more detailed, individual programmes in the following areas: agriculture, deforestation and species loss; air quality; climate policy; energy and carbon; ocean and water; plant-based diet; and waste.

And they’ll be encouraged to add their weight to the political movement – despite the risk that entails.

“The other cool part of EcoAthletes is its lobbying wing,” Suter enthuses. “We’re really engaged in the policy front. I’ve put my name on some bills and I see a lot of potential for other athletes doing the same – particularly in the locations their teams play. Using that name and platform to help those policies go through in Washington would be a big deal.

“Even going to Washington and lobbying in person is a possibility – who knows what the future holds.”

One aspect of the future certain in Suter’s mind is that, when the time comes for the 30-year-old to hang up his cleats, he sees his career away from the diamond – unless there’s an environmental angle.

“Environmental protection, sustainability, clean energy – this is my calling after baseball,” he says with certainty. “I’m not staying in baseball unless it’s with the sustainability office of the MLB.”