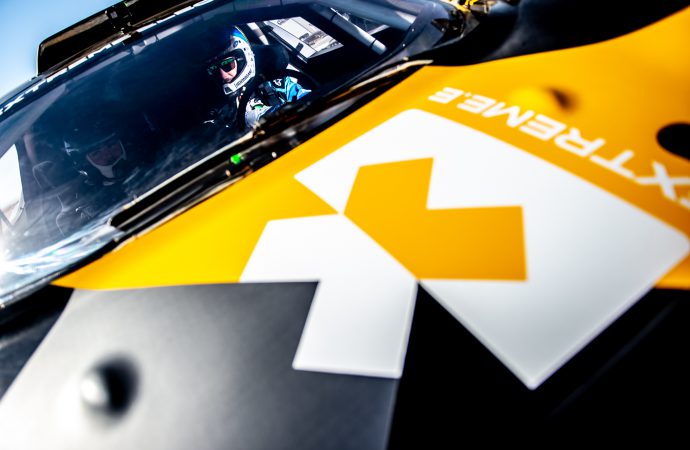 After steering Formula E from uncertainty to growing popularity and profitability, Alejandro Agag believes motorsport’s positive impact on the planet can go up a notch with the new off-road series

Reflecting on his years at the pinnacle of American football, Steve Young, the iconic San Francisco 49ers quarterback, famously decried that perception was as strong as reality. “If you are perceived to be something,” he said, “you might as well be it because that’s the truth in people’s minds.”

Perception, though, has both positive and negative connotations. For Young, the perception that he was a fearless leader after confronting his coach helped him galvanise his teammates. On the flip side, others can spend a career trying to shake off perceptions they feel are unjust or exaggerated.

Alejandro Agag has been challenging, and overcoming, negative perceptions throughout his time in sport; when he was part of a consortium (alongside Bernie Ecclestone, Flavio Britatore, Lakshmi Mittal and Amit Bhatia) that acquired Queens Park Rangers Football Club in 2007, they were perceived as group of billionaires who knew nothing about football. Within four years the club was promoted to the Premier League.

When he conceptualised an electric car racing series in the mould of Formula 1, he was told it would never work. Six years later, Formula E is a profitable business with an audience of 411 million people – an audience that increases with every season.

Agag is a man who deals with reality, not perception. That’s why, when documentary-maker Fisher Stevens articulated concerns about his latest venture, Extreme E, Agag calmly made the distinction between perception and reality, and decided to move ahead.

Stevens – who is directing a Netflix series to document the first season of the electric SUV off-road racing competition – challenged the whole concept of the sport. Was it sustainable, he asked, to host off-road races in some of the world’s most badly-damaged ecosystems?

“Fisher was like ‘you take these cars to these places and you’re going to destroy them’, and so on,” Agag (below) tells The Sustainability Report. “But I told him he was mistaking perception with the truth. I care about the reality and the science.”

More importantly, the series will offer a high-profile medium to highlight the plight of these locations that have been decimated by extreme weather. And all the decisions made, Agag adds, are backed by science in the form of Extreme E’s Scientific Committee.

“These scientists are above the good and the bad – they have one million PhDs,” Agag exclaims playfully. “They will give their opinion, and if they think that you’re in any way taking advantage of their reputations, they will withdraw immediately because they are really respected. So we follow what they say.”

Makes sense from an Extreme E perspective, but why would four world-renowned scientists want to align themselves with a motorsport?

Woodall, who has spent a career investigating the human impacts on the ocean environment, says her motivation is driven by working with people who have different skills and experience to find solutions to global problems. And the true mark of success will be if the data they collect during location-specific science projects are “turned into usable information”.

Among the portfolio of science projects being overseen by each expert, a special ‘Legacy Programme’ will sit as the showpiece.

In Brazil, naturally, the Amazon is at the heart of this programme. But more than just a simple reforestation project, Extreme E will work with The Nature Conservancy to develop a project that puts social good at the same level as environmental stewardship.

The premise is simple; Extreme E will fund the restoration of 100 hectares of Amazonian rainforest, but will plant cacao trees so that local farmers can harvest the “high value commodity” beans and create a sustainable living.

Human stories like these, Agag explains, will be crucial to creating a lasting legacy for the races and for engaging fans. Although fans won’t be able to attend races live, they will be given the opportunity to participate and contribute to the legacy projects through philanthropic donations.

Extreme E’s role, Agag explains, will be as the “initiators” for these projects, and while it has committed funding to each of the legacy programmes, the main ambition is for fans, sponsors and other interested parties to be so struck by the race premise and the human stories, that they will want to invest to multiply the positive impact.

Stevens, who produced climate change film ‘Before the Flood’ alongside Leonardo DiCaprio, is crafting a documentary that will emphasise these stories of human struggle and endeavor over race action. An example of the “super strong” stories that Agag wants to demonstrate can be found during an experience he had when visiting the Lac Rose destination in Dakar.

“When we were in Senegal we did this beach clean-up with all these kids from the local school. We went to the school, which was not in a very good condition, and spoke to them. I asked them how many students they had. He (the teacher) said, ‘It’s funny you should ask that. Last year we had 100, now we have 400.’ How is that possible, I wondered. Well, it’s because many villages on the coastline had been destroyed by the rising sea level and people had to migrate.”

Agag adds: “It is the same water that we saw one month before in Greenland melting from the ice cap. It’s all connected. The water melting there is now making the sea level rise in Senegal.”

Much of the documentary and companion content that will be showcased digitally will focus on the RMS St Helena – a former Royal Mail ship that has been transformed into the hub of the Extreme E series. The boat is the place where all of Extreme E’s cargo – including the SUVs – will be transported from location to location, and will be a hotbed of scientific activity throughout. According to Agag, much of the content will resemble a “scientist reality show”.

Peter Wadhams calls the ship is “an amazing addition to the world’s oceanographic fleet” and will facilitate the collection of original research conducted by students destined to be the “future of science”.

In between races, the RMS St Helena will make a number of additional stops in ports around the world so that fans will get the chance to see the electric SUVs and science projects up close. One of the strengths of Formula E lies in its E-Village concept, which allows race-goers to meet some of the drivers, check out the electric vehicles and experience other sustainable technologies. And while the primary method of fan engagement will come through digital content. Agag stresses the importance of creating the opportunity for real contact.

“The ship is a big personality. It will be like a floating museum,” he says. “And in some cases we will bring the cars down, do some exhibitions, and give our sponsors the chance to activate. It will almost be like a mobile E-Village away from the boat.”

Propelled into the mainstream

Agag is confident that this focus on science, and wider ‘purpose’ around climate change and e-mobility, will take a niche sport like off-road racing and propel it into the mainstream.

The magic word, he says, is ‘purpose’.

“People are now wanting to watch, and especially young people,” Agag says. “The younger you go, the stronger that desire is. To watch things with purpose is to feel that you are at least contributing by watching – it has some kind of meaning.

“That’s why Formula E has survived. I don’t think it would have gone anywhere 20 or 30 years ago because people simply didn’t care. There was no point in electric car racing. At least now when you tell someone about electric car racing, they acknowledge that electric cars make sense because we have to do something for the planet. More people are inclined to watch it.”

The founder suggests that the crisis whipped up by the Covid-19 pandemic will only make this thirst for products and events with purpose more strong, and there’s evidence to suggest he might be right. A Covid-19 fan survey conducted by Nielsen generated some encouraging findings: 72% of sports fans place loyalty on brands with social values that align with their personal beliefs. Three-quarters (75%) of sports fans have an increased interest in brands who have shown to be socially responsible and ‘do good’ more than they did before Covid-19.

Agag has also seen evidence that Formula E is proving to be an effective tool for marketing electric cars to the wider public. When conducting research following a race, Formula E found that 95% of people who had witnessed the action live were closer to buying an electric car than before they attended.

Purpose, he emphasises, is part of the “new business model for sport”.

It’s a business model, he explains, that is not too dissimilar to the current model. Sponsorship, broadcasting rights and ticket sales will remain a fundamental part of the picture. The missing piece for many sports, currently, is the purpose.

“If you don’t have the purpose, that’s when your sport will slowly lose energy, fizzle out and disappear,” he says. “If you have a strong sport and are able to add purpose to it – it has to be authentic – you’re in good shape.”

And it’s not just fans who need to feel a purpose – it’s also important for building the commercial partnerships that make the business financially sustainable. Here, it’s about aligning with the core purpose of the sponsor that you want to partner with.

Continental, Extreme E’s Official Tyre Partner, has been awarded for its sustainable innovations. LuisaViaRoma, the series’ Official Fashion Partner, has a sharp focus on organic materials, ethic trade, recycling and upcycling, and women’s empowerment – the latter of which aligns with Extreme E’s pioneering policy to bring male and female drivers together, competing as equals, during each race.

But Agag’s view on commercial partners is more pragmatic than idealistic. He stresses that he doesn’t like this “good guy, bad guy narrative” that places some organisations and industries in boxes marked ‘pariah’. For him it’s all about focusing on the reality, not the perception.

“Some people take ownership of the sustainability fight, the movement, and say ‘we’re good, they’re bad’. And, obviously, the bad ones are the oil companies, and so on. But we think those are the companies we need to win over. They are not the companies we want to put in a box. When Shell is producing 100% of its energy from solar or wind we will have gotten somewhere.

“We are against putting those companies on the side – of course they have to have commitments and objectives – but we believe Extreme E’s mission is to bring together companies, places, people on the journey in the right direction. If Shell wants to be a partner of Extreme E, we would very happily take them on board, as long as they commit to certain things that I’m sure they’d be happy to commit to, to go in the right direction.

“We want to be an actor that is inclusive, not exclusive.”