Hannah Mills: “The ocean plastics crisis is staring us in the face. It’s terrifying” 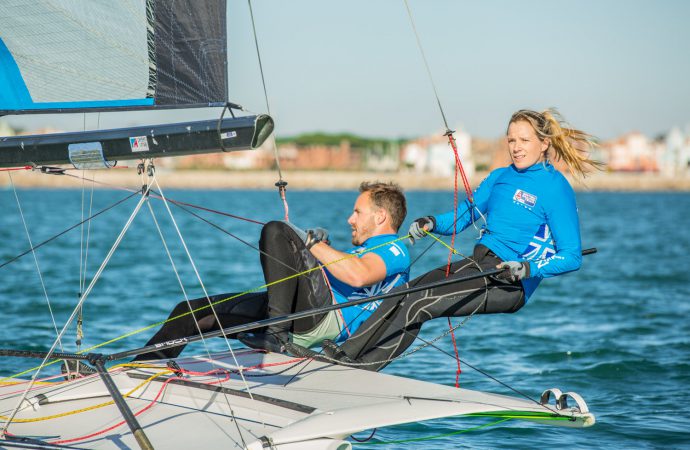 For Hannah Mills, the 2016 Olympic Games in Rio will always be a memorable experience. Off the shores of Guanabara Bay, Mills and her sailing partner Saskia Clarke shook off the disappointment of a second-place finish at the 2012 London Games to achieve gold in the women’s 470.

They returned home as part of the most successful Great Britain Olympic team of all time, with 67 medals (27 gold) and a runner-up position in the final medal table to show for their collective efforts.

But success on the water was not the only thing to shape Mills’ experience in Brazil. On route to her victorious voyage, through hours of training, she noticed that all was not as it should be in the water.

“We spent about 180 days in Rio in the two or three years building up to the Olympics. Where we trained, whenever we launched our boats, we had to literally wade through three metres of plastic and waste. It was eye-opening and terrifying,” she tells The Sustainability Report.

“Throughout the whole Olympic Cycle, from London to Rio, everywhere we went it was staring us in the face. We started looking at ourselves and awareness was increasing around ocean plastics. I just thought we need to be doing something about this.”

Mills left Guanabara Bay with two major decisions to make: whether to retire from or continue with sailing, and what to do about the ocean plastics crisis unfolding in front of her eyes.

While the former was a little complicated – Mills initially retired after her Rio win before deciding to give Tokyo 2020 a go with a new partner, Eilidh McIntyre – she was sure that campaigning against single-use plastics was her calling away from sport.

In autumn 2019, Mills launched the Big Plastic Pledge with the backing of the International Olympic Committee. The pledge’s premise is simple: encourage members of the public to change their behaviours regarding single-use plastic and signal to brands and policy makers their reluctance to engage with products that are made of, or packaged in, the material.

There are nine pledges that people can commit to: take my own water bottle; take my own coffee and beverage cups, food containers and cutlery; refuse plastic straws; leave no trace; refuse single-use plastic packaging and bags; make your own event merchandise; make informed choices; spread the word of the Big Plastic Pledge; and encourage sports clubs and events to find alternatives to single-use plastics.

The latter pledge could culminate in a large wake-up call for the entire sports industry, a significant proportion of which is still reliant on single use plastics for equipment and food and beverage packaging.

According to UN Environment, major sporting events can generate up to 750,000 plastic bottles apiece, but the overall numbers related to plastic in the ocean are even starker: up to 12.7 million tonnes of plastic enters the ocean each year. Around 100 million marine animals are killed every year because of ocean plastic. And by 2050, our oceans could contain more plastic than fish.

Tackling an issue of this magnitude can feel like an overwhelming prospect, but Mills is sure that athletes and sports organisations, with their huge reach, can use their platform and influence to get people to adapt their behaviours and, if not entirely solve the problem, help to cut the negative impacts significantly.

“We’re lucky that World Sailing is taking such a lead, but for athletes it’s a hard one,” Mills acknowledges. “Everyone I speak to is really positive and wants to do more, but athletes are always so busy. Some are also a little wary about standing up publicly to say that they’re making changes because there are always people trying to pick out the one time where you might get it wrong.

“It’s about striking a balance and accepting that, sometimes, change isn’t always immediately possible. We just have to make a start and athletes can have a big influence across the globe in bringing awareness to people everywhere.”

Some athletes may feel that commercial partnerships and sponsorship opportunities may be limited if they are too outspoken about particular issues – that anything perceived as even mildly controversial could spook the decision makers at leading brands. Mills disagrees with that notion by demonstrating that her high-profile environmentally-focused campaign has actually helped her and McIntyre secure backing from new commercial partners in the run-up to Tokyo 2020.

Investment company Schroders has started to sponsor Mills in the last year as her Big Plastic Pledge chimes well with its own sustainability initiatives. Volvo, which has been a sponsor for almost a decade, is also aligned with the campaign due to its work eradicating single-use plastic from all its offices in 2019, and its backing of UN Environment’s Clean Seas campaign (which is also being supported by the IOC and a number of sports federations).

“Sustainability has opened up many more doors to people wanting to get involved in sport and athletes because it’s such a positive thing,” says Mills. “So many companies are taking note and wanting to do more.”

Although aiming for another gold will be top of Mills’ agenda when she gets to Tokyo later this year, she’s keen to use the upcoming Olympics as a platform to showcase the Big Plastic Pledge to a wider audience. Related activations will be on show in the Athletes Village, and Mills is working with the IOC on some content to boost awareness even more.

Predictably, the question on everybody’s lips is what will Mills do once the Games are over? Is she contemplating retirement, or will she continue to compete? Perhaps a full-time career in sustainability will be the next step.

“Nothing’s clear yet, but I’d love to get into a sustainability role eventually,” she enthuses. “I’m so passionate about that side of things. I think I need a bit of education while pushing the Big Plastic Pledge, growing it, and creating more partnerships with sports events and brands. It’s exciting that everyone I speak to is keen to help and wants to be part of it. You just don’t know where it’s going to go.”