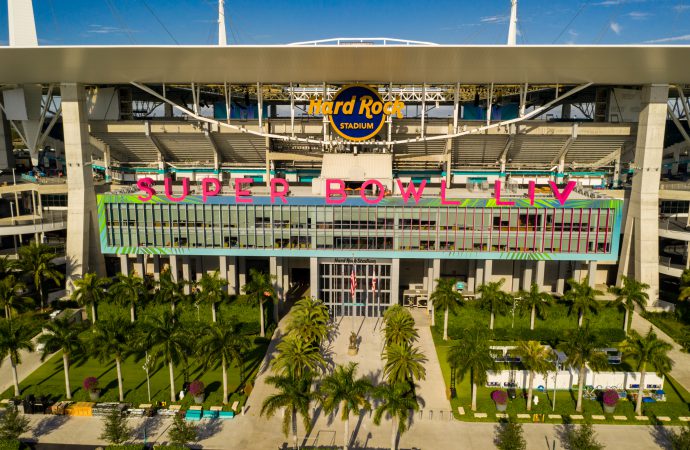 A successful sustainability project in sport can be defined by a few key characteristics. Firstly, it should have a demonstrable positive social and environmental impact. That much is obvious. Getting fans genuinely engaged in the initiative makes the endeavor even more worthwhile. And if you can get the support of a sponsor or two, you’ve got the cherry on the cake.

Jack Groh, the director of the NFL’s environmental programme (known as NFL Green), is sure that he’s got the complete set going into Super Bowl LIV this weekend.

On Sunday, the eyes of America will be on Miami’s Hard Rock Stadium, where the Kansas City Chiefs will take on the San Francisco 49ers in this year’s showpiece. But, behind the scenes, the NFL Green team and Miami Super Bowl Host Committee have spent the last year working on an ambitious portfolio of environmental and social project – many of which have borne fruit long before a ball has been kicked.

One such project focused on the restoration of under threat coral reef along the South Florida coast. At 221 miles long, the Florida Keys has one of the largest reefs in the world. However, much of that is being destroyed by ocean acidification and climate change.

It’s a big problem for the natural environment and the local economy. The coral is responsible for $10bn in annual income to the area, as well as 71,000 jobs. So, in partnership with the University of Miami, the Florida Department of Environmental Science, Frost Science Museum and Verizon, the US’s largest mobile network, NFL Green and the Host Committee planted 100 pieces of climate resistant coral last spring to give the reef a boost.

“It’s one of the best projects we’ve ever worked on,” Groh tells The Sustainability Report. “The area looked like an underwater desert last spring. Now it’s a thriving ecosystem.”

Jacquie Weisblum, the Host Committee’s director of the Ocean to Everglades environmental programme, agrees with Groh about the importance of the project.

“The reef serves as a foundation for where we get our marine protein, it provides us with protection from storm surges. We have a duty to not only enjoy it but protect it,” she says. “It gave us the opportunity to not only highlight the value of our coral reef, but use the spotlight of the Super Bowl to show the value of coral reefs around the world.”

As the name suggests, the Ocean to Everglades programme has concentrated its efforts on specific environmental challenges facing the South Florida region – a “no-brainer” says Weisblum, adding that the economy depends on both the Everglades and coastal area.

One of the most eye-catching projects is focused on the capture of harmful Burmese pythons. An invasive species, the Burmese python is now estimated to live in the area by the hundreds of thousands due to unwanted pets being cast out into the wild and breeding (a female Burmese python can lay up to 100 eggs per year). These pythons, which can grow up to 20 feet, have “traumatised” the local wildlife, significantly reducing the populations of small mammals and birds.

To highlight the issue, the Host Committee launched the ‘Python Bowl Challenge’ (above), in partnership with the Florida Fish and Wildlife Conservation Commission and the South Florida Water Management District, which challenged members of the local community to capture and humanely dispose of the snakes following a period of training. Over the 10 day Python Bowl, 80 Burmese pythons were captured.

“It’s become a tremendous issue and the state has allocated resources for removing these creatures. It’s a very unfortunate situation for the snake. They’re beautiful creatures but they cannot be here,” adds Weisblum.

According to Groh, funding for the greening projects came from three areas: the NFL, brewery Anheuser-Busch and Verizon. Indeed, the latter provided “nearly half of the entire sustainability budget” for this year’s Super Bowl projects.

“The sponsor engagement piece is really turning out to benefit us and the communities we work with,” Groh says. “It has been a tremendous partnership with Verizon.”

While many organisations – particularly consumer facing firms – leverage their sustainability efforts to demonstrate the green credentials of their products or to improve their brand reputation, Groh explains that Verizon’s motivation since the partnership started seven years ago revolves around one thing: employees engagement.

While the network operator has a chief sustainability officer in the shape of Jim Gowen and an ambitious plan to become carbon neutral by 2035, the focus on the NFL Green project is to encourage volunteerism among its staff.

In its 2018 CSR report (the latest edition), Verizon revealed that employees dedicated 200,000 hours of time over the year to volunteering for good causes. Although the company doesn’t have a “strong presence” in South Florida, Groh explains that at least three dozen members of Verizon staff came to volunteer on various projects.

Fan engagement is the third piece of the puzzle. On game day, three of the 12 navy seal veterans who worked on the coral restoration project will be interviewed live via the stadium monitors so that spectators can have the chance to learn about the project.

But the largest initiative in the area of fan engagement is an expansion of the ‘Recycle and Win’ campaign that was piloted last year in Atlanta.The NFL Green team working in the stadium on game day will be split into eight teams of two to patrol the venue searching for people who are recycling. Around 350 fans seen doing the right thing with their waste will be presented a special forest green-coloured Super Bowl hat and celebrated via the NFL Green social media accounts.

The project was also piloted during the NFL Draft, where 320 social media posts generated 60,000 impressions over the weekend.

“The year we’ve decided to promote the hashtag so people can find it and share it with their friends,” Groh explains. “Then 60,000 impressions will be in the rearview mirror compared with what we will do.”

Miami’s Bayfront Park has been hosting a Super Bowl Live event in the run-up to the game, which is free and open to the public. An Environmental Village has been organised by the Host Committee, the Ocean Conservancy, the Everglades Foundation (who jointly founded the Ocean to Everglades programme), the Florida Fish and Wildlife Conservation Commission, the South Florida Water Management District, and the Florida Department of Environmental Protection.

“We can engage the public and make them aware of a variety of issues,” Weisblum tells The Sustainability Report. “We can demonstrate how lucky we are to have our oceans and Everglade and how much we depend on them. We expect 500,000 visitors to come through over the course of the event, and we want them to engage and learn.”

Weisblum adds: “I want the legacy of this Super Bowl environmental programme to be the power of knowledge and behaviour change.”

Groh agrees, and will co-host a Super Bowl Sustainability Future event in which he will talk with representatives from the four future Host Committees (Tampa, Los Angeles, Phoenix and New Orleans) about the sustainability expectations.

Much of that conversation will revolve around commitments to funding, recruiting volunteers and making connections with local schools and material recovery organisations.

Connections with schools and educational institutions is crucial for the NFL Green’s ‘Super Kids – Super Sharing’ project (above), which involves the donation of learning materials and equipment to lower income schools. In Miami, more than 25,000 items (15,000 books and 10,000 pieces of sports equipment and school supplies) were donated in the first hour.

Upcycling and reusing is also core to NFL Green’s material recovery strategy. Every year, ahead of the Super Bowl, Groh tries to engage a number of nonprofit organisations who will accept and use second-hand materials that would otherwise be thrown out following the event. Fabric, vinyl, carpeting, lumber, signage material and office supplies are all reused, repurposed or manufactured following the event.

“NFL Green started out as a little recycling project in Atlanta 27 years ago,” Groh says after reeling off a number of achievements in Miami alone. “The question is, how do we move the needle a little further? That’s always our main challenge: how do we make next year even better.”

How can Super Bowl make its sustainability programme even better next year? Let us know in the comments below.